RM15,000 savings in six weeks! That is the amount Kuala Lumpur City Hall (DBKL) saved in tipping fees and transportation costs after it started an organic waste processing programme at the Kuala Lumpur Wholesale Market.

“This pilot project is a green initiative done at the market’s outdoor waste separation centre,” said Kuala Lumpur mayor Datuk Nor Hisham Ahmad Dahlan during his visit to the market in Selayang.

“It is a good programme for Kuala Lumpur because it helps save the environment and reduces tipping and transportation cost to send the waste to the Bukit Tagar landfill.”

DBKL Health and Environment Depart-ment deputy director Norhayati Mat Said said they spend about RM100 in tipping fees and transport costs to send each tonne of waste to the landfill.

“DBKL has been able to save about RM15,000 over a six-week period after the project was implemented.”

The programme, which involves vegetable wholesalers and workers at the market, aims to reduce the volume of organic waste sent to landfills or dumped into rivers, increase awareness of the need for waste separation and promote the zero-waste concept.

According to Alam Flora, the Kuala Lumpur Wholesale Market generates some 16 tonnes of waste per day and 60% of those are organic waste.

The consortium manages the operations at the wholesale market while Betsol is a biotech company that runs the programme.

Organic waste such as damaged vegetables and wilted leaves are separated and placed into mobile plastic garbage bins before being transferred to larger roll-on roll-off bins and carted off to Betsol’s processing facility in Rawang.

“A week after the flies’ larvae are fed on the organic waste, they will turn into pupae that can be used as animal feed for chicken and fish. The flies’ excrement is turned into organic fertiliser,” he explained.

Norhayati said Nor Hisham had challenged her team to carry out the programme within three months, and it was so difficult that they almost gave up.

“It was challenging to deal with the high volume of lorries entering the market and educate workers on how to properly separate organic waste from non-organic types such as plastic bags, newspapers and polystyrene packaging,” she said.

“We want to ensure the programme goes smoothly at the dedicated space in the market’s outdoor area before it is expanded to the indoor space.

“About 80% of the market’s waste comes from the indoor space where the wholesalers do their trading.”

“Betsol will transport organic waste from the market three times a week without charging DBKL any fees.

“In exchange, they get to process the waste and sell it as fertiliser and animal feed.

“DBKL gets to save money and the environment by reducing the amount of waste sent to the landfill,” she said.

“If the programme is successful, there are plans to expand it to other markets in Kuala Lumpur,” said Nor Hisham.

He said money earned from the savings would be channelled to projects benefiting the people.

The mayor said DBKL would also address other issues at the wholesale market such as lori hantu (unlicensed lorries), illegal foreign workers and lack of parking space.

“Some of these need to be done through stricter enforcement and collaboration with other agencies such as the Immigration Department.

“There is a proposal for multi-storey parking to be built.

“I am of the opinion that the cost should be split 50:50, half to be borne by DBKL and the other half by the consortium,” said Nor Hisham. 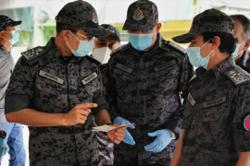