SHAH Alam folk now have another reason to watch movies as TGV Cinemas has opened its 35th location in Central i-City.

The cinema, located on the fourth floor of the shopping centre, aims to differentiate itself by offering a premier experience to patrons.

“Our customers come to our cinemas to watch movies but what about the experience before and after the movie?

“We need to look at providing a better and more comfortable space for them to interact before the movie as well as stay on to talk about it after,” said TGV Cinemas chief executive officer Yeoh Oon Lai.

He said the company’s vision was to create an inspired and comfortable entertainment destination as well as an upscale environment for patrons.

Its latest cinema in Central i-City has nine halls, including the world’s largest Samsung Onyx, an IMAX screen and a family-friendly hall for young children.

The standard halls have also been rebranded to Deluxe, with comfortable leather seats paired with crystal clear digital projection while the Samsung Onyx hall features a screen that has a 14m wide and 5m high Onyx Cinema LED screen which can be enjoyed from the hall’s reclining leather seats.

The IMAX hall is one of the largest with a floor to ceiling screen. It is enhanced by ultra-high definition content, bringing movies to life and further elevating one’s viewing experience.

Patrons can also visit two retail outlets; Royal Selangor and Chatime located near the foyer of the cinema and make purchases during their visit.

There are also Samsung mobile charging stations located around the cinema and free WiFi will be made available to patrons soon.

“Every one of our cinemas is different from one to another and I hope this new location will appeal to residents and moviegoers too,” said Yeoh.

He gave guests a short tour of the cinema, including the different halls.

Guests were also entertained with performances during the visit before being treated to the Avengers: Endgame movie. 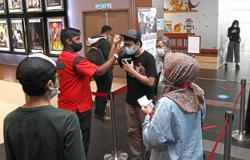