DESPITE a perceived downturn in the property market, the four-day StarProperty.my Fair 2019 still drew a sizeable and encouraging crowd of property hunters.

“Our projects M Vista in Southbay City and Ferringhi Residence 2 in Batu Ferringhi were well-received by the visitors.

“M Vista stands to benefit from the HOC stamp duty exemption. Together with the incentives offered by Mah Sing’s ‘RM500,000 In Your Bank’ campaign, it encourages home buyers to grab their ideal homes during this period.

“Many visitors were also drawn to Ferringhi Residence 2 for its strategic location and resort-themed facilities,” she said.

Khaw said most of the visitors were also interested in the Refer and Reward + (RnR+) incentives, which they can be rewarded up to RM60,000 when they refer their friends to buy units at the two projects.

“We believe the leads we got at the fair will be converted into sales at a later date,” she said. The four-day fair ended at Sunway Carnival Mall in Seberang Jaya on Sunday.

“This shows that those with the disposable income are interested to buy properties in prime locations for investment,” he added.

Hunza Properties managing director Datuk Khor Siang Gin said many visitors who visited their booth had made appointments to see the TreeO showroom.

“They were eager to know when the project will be officially launched,” he said.

TreeO, which will be launched in June, is Hunza’s first affordable housing project located in Taman Sungai Ara.

“The Palma Residency in Bukit Mertajam, a terraced project, also drew attention from those looking for landed properties within a secured environment,” she added. 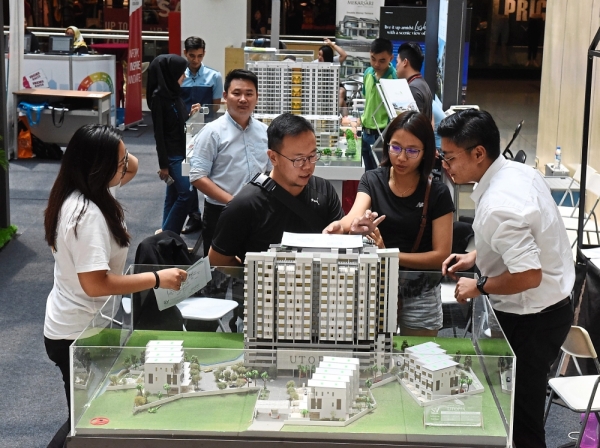 Henry Butcher Seberang Prai senior manager Fook Tone Huat said the overhang of residential properties in the primary market in Penang decreased to 3,261 units in the third quarter 2018 from 3,958 units in the second quarter 2018.

Visitors at the fair concurred that location was the most important consideration for buying properties.

“The property has to be located in an area which is accessible to the amenities nearby.

“Prices of properties in good location such as Simpang Ampat have risen significantly over the past 10 years.

Miza Ahmad 33, a clerk, said he was looking for landed property in Bukit Mertajam.

“I am looking for landed property of about RM400,000 that is strategically located in Bukit Mertajam,” she added.

There are others who feel that it is more important to own a property in a quiet neighbourhood.

S.T. Wan, who is staying in George Town, said that privacy was vital in securing a home.

“We are living in George Town now and would like to own a second home priced less than RM500,000 in Seberang Prai.

“The price of houses has come down slightly this year,” she added.