The back portion of the restaurant has been renovated, making the back lane narrower.

IT IS a popular makan spot in Jalan Pantai Baru, Bangsar, attracting a steady stream of customers day and night. But few realise that Ali Cafe Tomyam Seafood restaurant is illegally built on government land.

The cases that have come to light involve buildings put up during the previous government’s administration.

Ali Cafe restaurant started as a stall some 20 years ago before expanding to its current size a few years ago.

The building, located next to the Pantai fire station, is built on top of a road divider, on road reserve land. The two-storey structure with facilities such as toilets and a surau, has undergone massive renovations. The back portion of the restaurant has been renovated, making the back lane narrower.

Ali Syed Mohamed is the sole proprietor of the restaurant.

When contacted by StarMetro, Ali Syed claimed that he had got the go-ahead from a high-ranking official in the previous administration.

“We operated under the trees for years. I took care of the area and kept the surroundings clean and was even given a certificate for cleanliness.”

When Ali Syed was renovating the place, which he claimed cost RM3mil, he was served with a notice to demolish the structure.

“I pleaded to be allowed to stay as I borrowed money for the renovation and needed to continue the business to pay my loan,’’ he said.

The land the restaurant sits on belongs to the Federal Territory of Kuala Lumpur Land and Mines Office (PTG).

Under Section 425 (1) of the National Land Code 1965, the restaurant is occupying government land illegally.

If the owners fail to move out, they can be fined up to RM500,000 or jailed for not more than five years.

“Road reserves are for public use and permanent structures cannot be built on them. Gunaseelan says there should be no double standards when dealing with illegal structures.

“We had received complaints about this (restaurant) for several years but when we wanted to take action a few years ago, we were asked to hold back,’’ said the officer.

“It is on state land, which is governed by rules under the National Land Code.

“Since the structure is illegal and sitting on road reserve, it can also be demolished under the Street Drainage and Building Act 1974 and the Federal Territory (Planning) Act 1982,’’ he said.

The officer added an enforcement team was given orders to demolish the structure several years ago when the restaurant was carrying out renovation but the DBKL team was instructed at the eleventh hour to stop the operation immediately.

“I remember that day very well. We went in and were told to retreat,’’ said the officer.

He said they were instructed not to disturb the restaurant anymore and even the DBKL health and environment departments were ordered to issue licences for the outlet despite it being illegal.

When contacted, a DBKL spokesman said, “We did order a demolition exercise previously, but we got instructions to hold off (on the demolition).” Due to its prime location surrounded by offices like Angkasa-puri and the Telekom headquarters as well as the fire station, the restaurant, which is open from noon to late night, is constantly packed, especially during lunch and dinner.

The stretch of Jalan Pantai Baru where it is located is very congested, made worse by diners who park their vehicles in front of the restaurant, obstructing traffic flow.

Concerns were also raised as the fire station is located next to the restaurant, and the narrowed roads could delay response time.

The restaurant has a Grade A rating, and is relatively clean, with flat TV screens and ceiling fans.

Ali Syed hopes his restaurant will be allowed to continue operating.

“I have written to Lembah Pantai MP Fahmi Fadzil and PTG asking for leniency and am awaiting their response,” he said

Save Kuala Lumpur (SKL), a non-governmental organisation fighting to protect green spaces from being developed, has expressed outrage over the matter.

When contacted, SKL deputy chairman Datuk M. Ali said according to the Kuala Lumpur City Plan 2020, the parcel of land is gazetted as “open space for public use”.

“It is surprising how the structure is standing on land meant for public use. Whoever is responsible for this situation must be made answerable.”

“It’s a fire hazard due to the tight space. If an emergency were to occur in the vicinity, the fire engines might be obstructed,’’ he said. The restaurant is spacious and comfortable, with flat TV screens and ceiling fans.

“This happened quite a lot during the administration of the previous FT ministers when the land office was under the purview of the ministry.

“After the general election, PTG became independent of the Federal Territories Ministry. The current minister must be neutral and above board on all land matters and do the right thing by demolishing illegal structures,’’ he said.

Gunaseelan added that when the local authority can mercilessly tear down illegal house extensions and stalls run by the poor, it cannot and should not practise double standards with other groups.

Fahmi had previously been quoted as saying that building owners who broke the law should not be allowed to buy or rent the land as it was akin to saying that the entire deal was above board.

He had said that it sent the wrong message because it gave the impression that anyone who was building a structure on land that was not theirs could eventually get away with it. StarMetro attempts to contact PTG director Sharez Izuan Md Zaidi on the matter were unsuccessful.

The hall was built for the community but was being rented out to a furniture company.

Kompleks Tun Abdul Ghafar Baba@Seputeh was built on 0.8ha land owned by PTG under dubious circumstances and was not fully utilised by the community.

Khalid had also highlighted the case of another community hall built on 0.7ha land in Setapak, which was handed over to a political party by the previous Barisan Nasional administration.

Both building owners have been given until the end of this month to explain themselves or face action.

Prior to that, another plot of land zoned as open space at Medan Imbi, which now houses a structure which Khalid has referred to as “mystery buildings”, is also under scrutiny.

The Malaysian Anti-Corruption Commission (MACC) is investigating the matter. 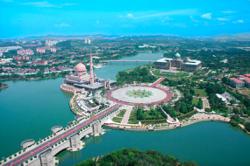