Lifeline for victims of cardiac arrest PLANS are under way to draft a by-law to make it compulsory for the automatedexternal defibrillator (AED) to be installedin public places in Penang.

State Health Committee chairman Dr Afif Bahardin said the move was a vital in saving lives, adding that it would come under the jurisdiction of the Penang Island City Council and Seberang Prai Municipal Council.

He said Penang would become the first state in the country to carry out the implementation once the law is adopted.

“At the moment, there are 46 public AEDs in schools, parks, business and government premises.

“The survival rate of cardiovascular cases in Malaysia is less than 1% compared to 12% in Singapore.

“We want to make it mandatory for AEDs to be installed and displayed at publicpremises under the local councils.

“One life has been saved since its introduction in 2015,” he said after launching the ‘Mass CPR-AED 2018’ programme at the Pesta site in Sungai Nibong. 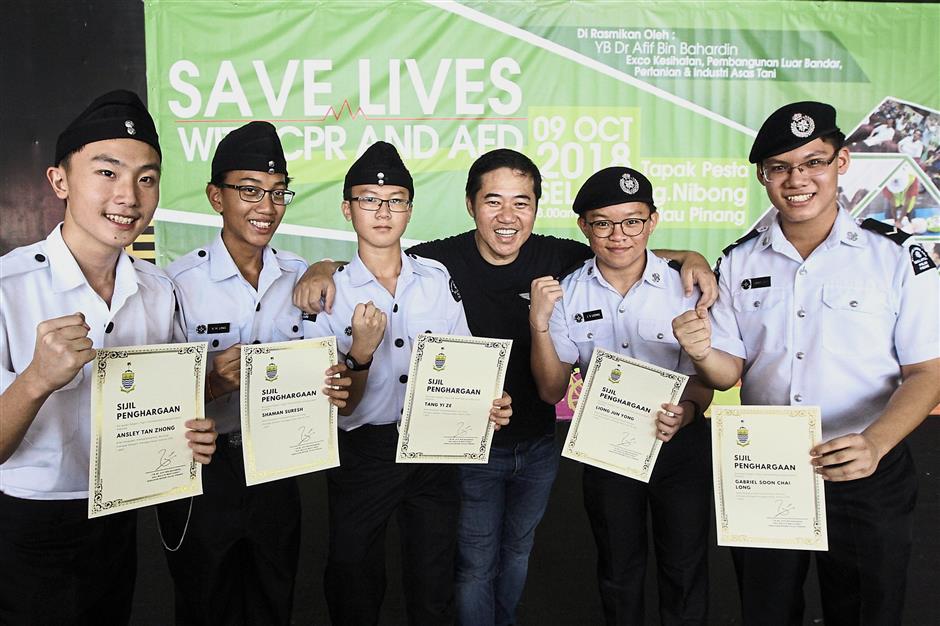 Long (in black T-shirt) is all smiles as he poses with his saviours — (from left) Ansley, Shaman, Yi Ze, Jun Yong and Chai Long.

Dr Afif was referring to Long Soo Keat, who had a sudden cardiac arrest during a football match with his Chung Ling High School mates at the school field on Sept 1.

Long, 49, who was also present at the recent event, met his ‘life-savers’ and was grateful to them.

He said he would undergo a surgery next month to put a stent into his artery that is blocked 100%.

The five boys also received certificates of appreciation at the state-level programme attended by more than 1,100 people.

The participants learnt cardiopulmonary resuscitation (CPR) skills and how to use an AED.

The state’s public AEDs, made by Zoll Medical Singapore Pte Ltd, give real-time feedback with voice commands to tell rescuers what to do.

Initiated in 2015, Zoll first donated five AEDs to Penang and today, the state government and other organisations have installed more than 40 public AEDs. 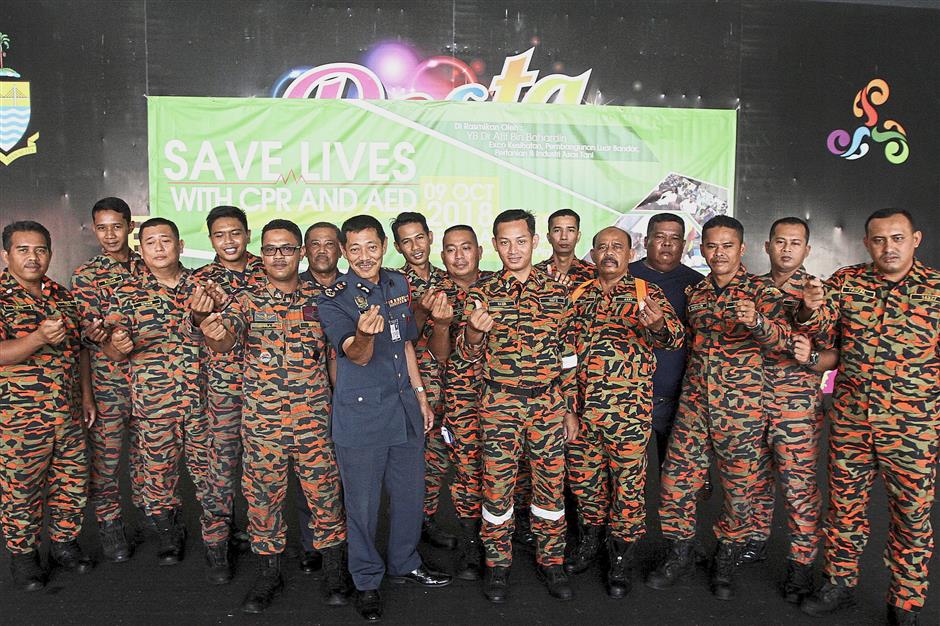 Firefighters posing for a photograph after the state-level Mass CPR-AED launch.

Their locations are shown on the SJAM HeartSafe Penang’s Facebook page.

“The AED had been used a few times but this was the first time a person’s life had been saved,” he said. 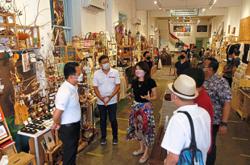