SPM students excel in the face of physical impairments

File image of Form Five students taking the SPM exam last year. In Perak, a total of 37,706 candidates sat for their Sijil Pelajaran Malaysia in 323 centres.

DUE to a disability, Lee Pei Xuan has to walk with a pair of crutches. She also has to deal with weakened limbs

But Pei Xuan did not let any of this get in her way as she strived hard for her Sijil Pelajaran Malaysia examinations because she has a bigger dream ahead of her.

“I want to study in a university. I promised myself that I would work as hard as I could to make my dreams come true,” said the bubbly 18-year-old who was beaming with joy with her results slip.

Pei Xuan, from SMK Horley Methodist in Teluk Intan, scored 2As, 4Bs and 3Cs for the exam, which her teachers described an amazing feat because she was ill throughout the exam period last year.

“I insisted on going to school and sitting for every paper. I told myself every time that I must not give up,” she said after collecting her result slip while accompanied by her grandmother Chay Meng Fong.

Chay said that Pei Xuan’s limited strength in her limbs was caused by a brain defect at birth. 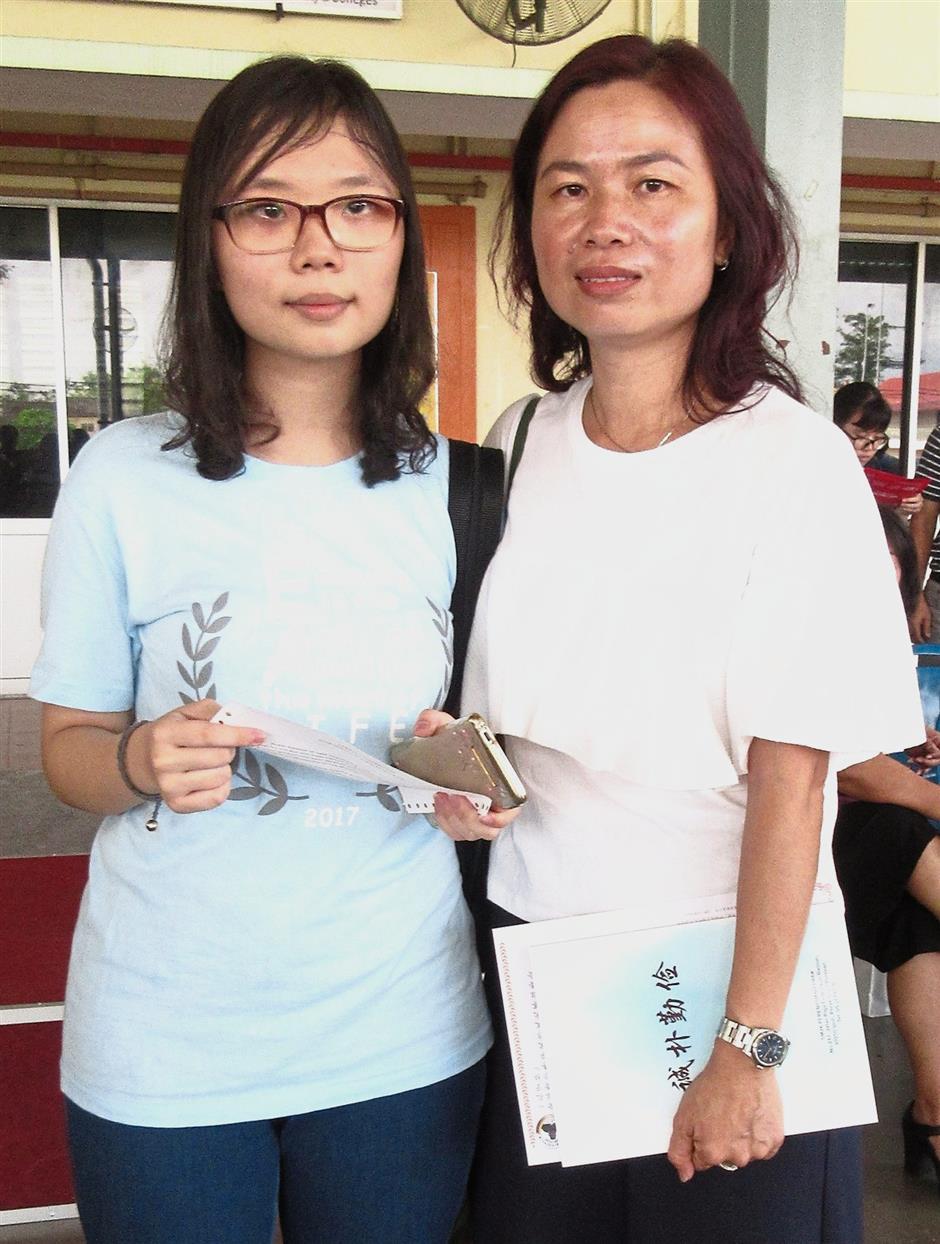 Weng Sam (left) took her vision impairment in her stride in scoring 4As and 2Bs in her SPM. With her is her mother Ho.

“Sometimes she even struggles to write her schoolwork.

“And due to her physical condition, whenever there is an exam, she becomes stressed and tends to fall ill easily too.

“Pei Xuan’s school life has not been easy over the years, and I am so proud that she did not let her disabilities stop her from achieving good results,” Chay said.

Lam Weng Sam, 18, from SMJK Perempuan Perak in Ipoh also took her vision impairment in her stride by scoring 4A and 2B in her SPM.

Weng Sam, who suffered glaucoma at an early age , is legally blind and needs a magnifier and a bright environment just to read.

“My daughter’s limited vision made it more challenging for her to study and complete her school work, so she also needed more time than other students for the exam.

“The Education Ministry allowed her more time to answer each and every paper,” said Weng Sam’s mother, Ho Lai Peng.

“I am really happy and proud of her good results, and I will support her decision to continue studying in Form Six, hopefully without straining her eyes too much,” said Ho.

Twin sisters Chong Jia Hui and Jia Fang, 18, also celebrated their outstanding achievement of obtaining 9As and 11As, respectively, in their SPM.

The excellent results were especially meaningful for Jia Fang, who was diagnosed with hearing impairment since she was small. 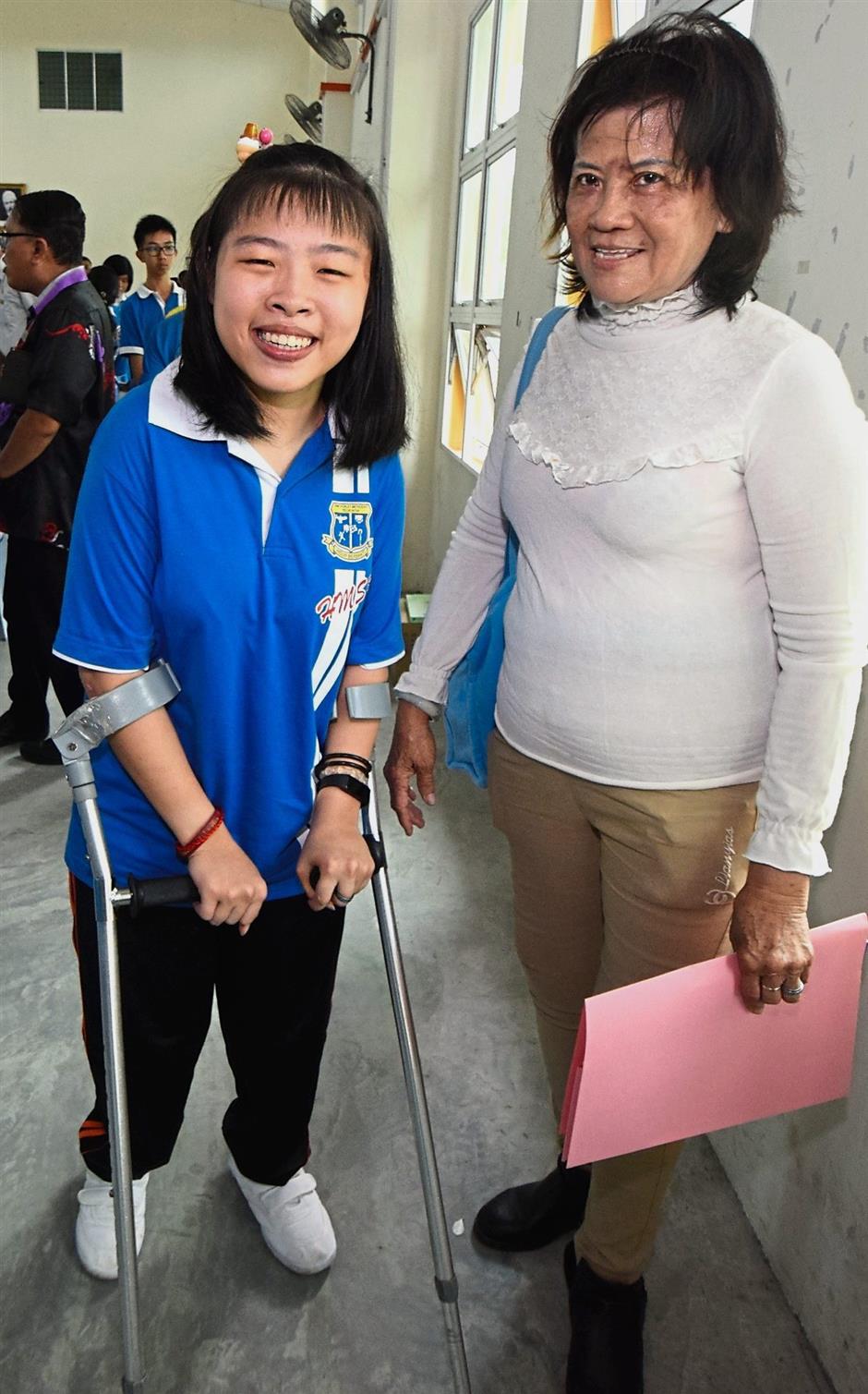 A beaming Pei Xuan (left) and her grandmother Chay were both overjoyed with her good SPM results.

“Whenever I could not hear clearly in class, my classmates would always help me.

“During revision at home or in tuition classes, my sister, who was in the same class with me, was always my biggest help whenever I ran into problems,” said Jia Fang, from SMJK Hua Lian in Taiping.

Jia Hui said she was happy for her sister, saying that her “hard work throughout the years did not go to waste”.

She said that both of them aspire to become doctors and are planning to further their studies in Form Six.

As for Lee Sze Yee of SMJK Ave Maria Convent in Ipoh, scoring 11As in her SPM was the best gift she could dedicate to her father who lost his battle withcancer three years ago.

“I hope that he will be happy seeing this from heaven,” said Sze Yee, 18, who cried tears of joy recalling her father’s encouragement to her.

“He always told me that ‘victory is for those who work hard’ and I never forget what he said even after he was gone,” she said.

Sze Yee said her father was always positive even during his illness.

“I remember that I was sitting for my PMR exams when my father passed away three years ago.

“It was a difficult time but I did not lose focus or let my sadness overwhelm me.

“This was because my dad taught me to be positive even in the face of life’s challenges,” she said, adding that she wants to become an artist one day and dedicate herself in more activities to help others.