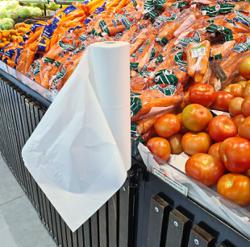 Tiong (left) launching the No Plastic Bag campaign in Sibu.

SIBU: The town has joined other green cities in the country to ban non-biodegradable plastic bags.

With the launch of the Sibu Free from Plastic campaign on Saturday, businesses in this town will stop giving out free plastic bags to shoppers.

Sibu Municipal Council chairman Datuk Tiong Thai King said the council had to take a tough stand as the use of plastic bags had increased tremendously over the years, thus putting a strain on landfills.

“We need this campaign to safeguard the environment and to make Sibu a greener place to live in,” he said.

It was learnt that plastic waste made up 14.5% of the total domestic waste of 45,000 metric tonnes dumped at the landfill in Kemuyang.

The municipal council’s first plastic-free campaign started in 2006 but applied only to Saturdays.

Towards the end of 2017, the campaign was revised to “Say No to Plastic Bag 2.0” to also include Sundays and Mondays.

Tiong advised the public to bring their own shopping bags from now on.

Participating businesses include supermarket, pharmacy, bookstore, petrol kiosk and bakery among others, there will be stickers in their premises showing no plastic bags will be provided.

If the shopper really needs to have plastic bags, he or she can buy it at 20sen each.

Some of businesses may provide biodegradable plastic bags approved by the council.

The move to go completely plastic-free was lauded by members of the public interviewed by StarMetro.

Senior lawyer David Ting gave his thumbs-up to the council.

“No one can deny that this measure promotes cleanliness at home and in our surroundings.

“Very often, the act of dumping plastic bags and materials is a major cause of drain blockage, and when this happens, the people who point a finger at the council are often the culprits,” he said.

Ting, 67, said in many developed cities, plastic bags had been banned since many years ago.

He said when plastic bag was not provided, the public would need to find their own alternatives to carry their purchases.

Society, he asserted, needs to be educated on discarding their waste responsibly and making full use of dustbins provided.

“If this attitude is not corrected, the effect of banning plastic bags will be considerably reduced,” he said.

Ting also praised the council for imposing compound fines on unscrupulous dumping in public places as another measure to promote cleanliness in Sibu.

“However, the effectiveness of enforcement remains to be seen as there are still issues, such as the presence of enforcement officers, collection of evidences, as well as difficulty in catching the culprits red-handed, to be addressed,” he said.

Shipping executive Albert Tay, 51, lauded the council’s initiative as a “very good” one.

He even urged the council to stop businesses from selling plastic bag at 20sen each.

“By allowing people to buy the plastic bag at 20sen each is defeating the whole purpose. It should be stopped altogether,” he said.

Tay said he had been using supermarket’s trolley during his shopping rounds. “I would push the trolley right up to my car as we have prepared boxes for the stuff,” he said.

His environmentally-conscious 16-year-old son, Duncan, was also supportive of the campaign.

“It is a good idea as plastic bags are non-degradable, using less plastic bags will be a win-win situation for the environment and all living things,” he said.

However, she also wanted the council to stop selling plastic bag even when requested by customers.

“It should not be allowed as it will give a chance for the supermarkets to make a profit from the sale of plastic bags,” he opined.

“Since end of last year, we have been using paper boxes as replacement for plastic bags for our customers to put their purchases,” he said.

He said the supermarket had also started giving out a newer type of biodegradable plastic bag which was approved by the council.

“This type of plastic bag is environmentally-friendly as it will decompose in one to two months,” he said.

He added that the supermarket did not encourage the purchase of plastic bags.

“Proceeds from the sale of these plastic bags are donated to charity. We are planning to stop selling them soon,” he said. 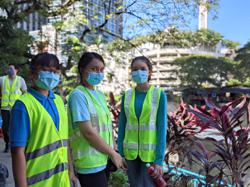