Committed to both his roles

Mohd Khairuddin is a second-term assemblyman.

JUGGLING multiple responsibilities at the same time can be tricky.

“So I have decided to ‘marry’ both by having state programmes in my constituency,” said the 48-year-old lawyer who is also Selangor Youth Generation, Sports and Human Capital Development Committee chairman.

“While high-performance sports such as athletics and football come under the Youth and Sports Ministry or National Sports Council’s (MSN) purview, community sports or traditional games are handled by the Local Youth Movement (PeBT) so it will be easier to organise them in my constituency.”

He said community sports such as tug-of-war, hopscotch and galah panjang have mass appeal as they are more accessible and can be played by everybody.

Better known as “MK” among some of his constituents, Mohd Khairuddin recently completed a climb up Mount Kinabalu as part of a state visit to Sabah.

“I met my state counterpart there and visited their sports facilities. But it was also a personal achievement to be able to climb up to the peak of Mount Kinabalu,” he said.

Mohd Khairuddin is a second-term assemblyman. He first won the Paya Jaras state seat under a PAS ticket in GE13, then won the same seat under PKR in GE14.

He served as Selangor deputy speaker for about six months, before taking on the youth and sports portfolio previously held by Selangor Mentri Besar Amirudin Shari after a reshuffling of portfolios.

“Amirudin shared his vision of developing the state’s youth and sports portfolio.

“We hope to establish a sports school in Selangor, similar to the Bukit Jalil Sports School, to groom athletes in high-performance games such as swimming and cycling. “We want to strengthen and empower Selangor MSN by establishing a permanent office for the council and training more Malaysia Games (Sukma) athletes.”

He said Amirudin had ambitions to make Selangor the leading state for cyber games and eSports.

“The state must accommodate the need and trend for cyber games, as many of our youths are running away from conventional sports and moving towards virtual or online games,” said Mohd Khairuddin, while acknowledging that it was a challenge to balance interest in real sports and online games.

“We have been organising the Selangor Cyber Games annually, with this year marking the fifth edition. The tournament, which covers computer, console and mobile games, attracts several thousand players including those from overseas.

“Selangor has organised the tournament well enough that the Youth and Sports Ministry wants to emulate it at the federal level.”

To people who have no idea where Paya Jaras is, Mohd Khairuddin jokes how he introduces himself as the “Sungai Buloh assemblyman”.

“A lot of Sungai Buloh landmarks are located within Paya Jaras, such as the Sungai Buloh Hospital, leprosy hospital, military camp and plant nurseries.

“However, Paya Jaras comes under the administration of three local councils (city, municipal and district levels) and three district offices, which makes things challenging as each agency has their own regulations.”

Mohd Khairuddin said Paya Jaras was fortunate to receive allocations under Selangor’s 2019 budget for some major upgrades and projects.

They include a RM50mil flood mitigation project and upgrading of two rivers, RM8mil for an alternative route for Saujana Utama and construction of 1,500 Rumah Selangorku affordable homes in Kampung Kubu Gajah. 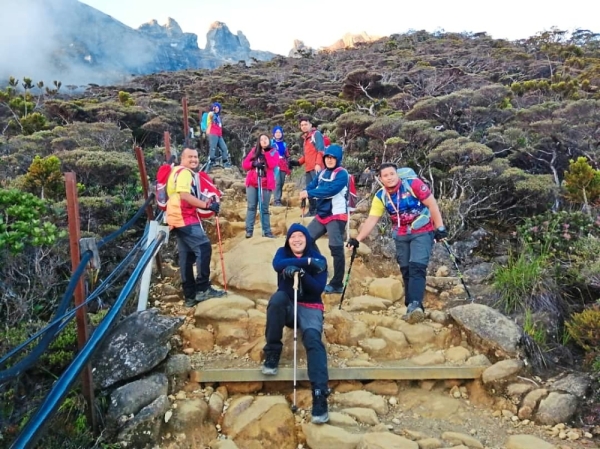 Mohd Khairuddin (front) during a recent hike up Mount Kinabalu, which he considers a personal achievement.

“The alternative route is needed to link Saujana Utama to the Guthrie Corridor Expressway, as the existing Federal Trunk 54 (FT54) road cannot cope with the increasing population.

“I hope Paya Jaras residents will be given priority to buy the Rumah Selangorku units as housing is a problem in this semi-urban constituency.”

Other issues that Mohd Khairuddin hopes to address for Paya Jaras are construction of a multi-storey market, land titles for villagers and insufficient schools in Saujana Utama.

“The Shah Alam City Council has approved the multi-storey market project located along FT54 in principle, but there is a need to call for a public hearing since it affects the community.

“The structure will have parking facilities within the building, to house the thrice weekly night market that is held there.

“Meanwhile, there are some 400 to 500 villagers that have been requesting for land titles for their homes, as they only have temporary occupation licence (TOL) for their property.”

Meet the people sessions are held on Fridays, from 3pm onwards.