Martinus (right) and wife Serena with the three children they are adopting (from left) Abigail, Isabella, and Isaac.

ISAAC was darting to every corner of the shopping centre where we met, totally disregarding the discomfort from his left below-knee amputation.

The six-year-old was under the watchful eyes of Pastor Henry Martinus and his wife, who could hardly find a moment of with Isaac at “full steam” and their two other daughters, Abigail and Isabella, attracted to the colourful merchandise around them.

Isaac’s life would have been very different had he not met Martinus.

His mother, a foreigner, sold him when he was in her womb.

The buyers rejected the deal when they saw Isaac’s condition.

“But that is not as difficult as the process of adopting and getting citizenship for our three children,” he added. Malaysians want to help migrant children but have to face so much difficulty during adoption and citizenship application process.

The high number of stateless and migrant children in the Klang Valley has prompted compassionate Malaysians to take these innocent souls into their care, but the process involved is onerous.

Isaac was brought to the couple, who were running the Agape Home that sheltered over 20 children at that time, when he was six months old.

They took Abigail, a special child, about eight years ago.

The only background information about Abigail was that her parents were in jail, and Martinus and his wife are still struggling to get her a birth certificate.

Isabella, now five, was brought to the couple before she turned three months.

She was rescued from a foreign couple who were trying to sell her in order to leave the country.

Martinus managed to get birth certificates for Isabella and Isaac thanks to them having hospital records.

The birth certificates clearly state that they are non-citizen, stripping them of the basic rights of a child.

With the help of a group of NGOs involved in children-related work, Martinus and 15 other families wanting to adopt stateless children had a meeting with officers from the Home Affairs Ministry and National Registration Department (JPN), and were given high hopes that everything would be done within a year.

The next thing they knew was that the citizenship application was rejected and the officers told them they should have done the adoption first, much to their surprise as it contradicted what they were previously told.

Then came the endless rounds of being shuttled between departments.

Eventually they reapplied for citizenship while having no clue why the first application was rejected.

In order to deal with this and to take care of the three children, the couple could not run the children’s home anymore and just directed the rest of their time and energy to a refugee school for about 100 children.

“I am sure since God has brought them to us, He will not leave these children stateless,” Martinus said, but wished the Government did not make the process so difficult.

“Yes, the authorities should check the background of the adoptive parents but should not make it so hard.

He worries for the children who are going to suffer, looking at the high number of migrant workers and refugees in the country.

“I am sure there must be hundreds of these children out there.

“We will have more social problems, and this creates a big market for baby sellers.

“Isaac’s case is definitely not isolated,” he said.

He said Malaysians could help and wanted to help, urging the Government to formulate a clear process to allow that to happen. Dr Hartini says the whole process of adopting a stateless child and getting citizenship for him/ her is so convoluted.

“The whole process of adopting a stateless child and getting citizenship for him or her is so convoluted,” lamented Yayasan Chow Kit co-founder Dr Hartini Zainuddin.

Dr Hartini has her heart set on the welfare of stateless children since 2005 when she first came across a large number of marginalised children, as they are without birth certificates, or only have birth certificates stating they are non-citizens.

“I was so shocked when I came across these stateless children.

“These children became invisible; I have come across instances where they were raped, abused, sodomised, beaten or sold,” she said.

In a long battle to save these children, Dr Hartini has successfully handled more than 100 adoption cases, about 40% of them involved stateless children.

While the adoption was successful after much effort, none of them has managed to get the approval for Malaysian citizenship.

Dr Hartini was among those who led the 16 families wanting to adopt stateless children, to file for the applications.

Their citizenship applications were rejected, and reapplication had been filed.

“We work closely with Citizenship Department this time to make sure we do not overlook anything,” she said.

The process of citizenship application for these adopted children has proven to be long, winding and ambiguous.

“The first step should be to get birth certificate for the child, but this is tough as two witnesses are required to prove that the child was born in Malaysia,” said Dr Hartini, citing her adopted daughter Zara’s case.

Then, there is a confusion of whether to proceed with adoption or citizenship application first.

Dr Hartini said she was given differing information by the officers.

“I have had to deal with Women, Family and Community Development Ministry, Home Affairs Ministry, National Registration Department and Citizenship Department among others, alongside UN organisations Unicef and UNHCR,” she said.

She does not know why the process takes so long.

“It seems different departments are working independently, everybody works in their own silo.

“It is crazy, there are so many gaps in the system.”

Even the laws involved are archaic and perplexing, she said.

Aside from the Birth and Death Law and Citizenship Law, the Adoption Law was drawn up way back in 1952 and amended in 1982.

There are different adoption laws for peninsular Malaysia, Sabah and Sarawak, as well as different practices for the option of going to court.

Zara is turning seven, but her citizenship application filed in 2012 was rejected without any explanation.

Dr Hartini is also trying to adopt a six-year-old boy, born with celebral palsy and she is still trapped in the tangled process.

“It is very convoluted even for me, how do we expect others to go through this?

She said the officers had been helpful but their hands were tied as they had to work within the current confines, but the guidelines definitely needed to be reviewed.

When asked for recommendation, Dr Hartini said the Home Ministry should at least issue a letter to say that a child was under the process of adoption or citizenship application so that he or she would not be hauled into the police truck if there was a raid. It is evident that Kim and Alaani need each other but the convoluted process of adoption and citizenship application for stateless children is making things difficult. Photos: SAM THAM and CHAN TAK KONG

Alaani Elsie Premaraj, 5, clings on to Kim Thiruchelvam, 45, like they are inseparable.

Although soft-spoken, her eyes gleamed with glee just like other much-loved children.

It is hard to imagine what could have happened to the girl had she not met Kim.

The public relations consultant and her husband, who is a lawyer, adopted Alaani when she was five months old.

Alaani was suffering from a second bout of severe pneumonia and warded at a Neonatal Intensive Care Unit in Kuantan for a month.

According to the birth record, Alaani’s parents were Myanmar nationals.

Kim is one of the 16 families mentioned by Martinus who had a meeting with the relevant departments to facilitate stateless children’s adoption and documentation.

“We have met so many officers. Then after the general election, the ministries have new chiefs and nothing happened to our applications.”

Kim only managed to get formal adoption order from the court in 2013, and submitted the second application for citizenship in December last year.

The long process and the multiple visits were really taxing; Kim dreaded the idea of adopting another stateless child.

Even with the couple being well-verse in law, they are not exempted from the runaround.

“I had faith in the system and did not question the advice given to us, but to our dismay we always found a different story after that.

“It is painful,” she said during an interview in Petaling Jaya.

“There is so much confusion, the process is so grey. I wish they have a clearer procedure,,” she lamented.

She finds it baffling that Malaysian couples are wiling to love and care for a stateless child but there is so much of trouble in the way of making the child a Malaysian.

“There are many childless couples in this country, they will love these children who will otherwise suffer in statelessness,” she said. 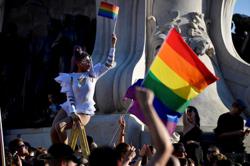