Flats residents doubt waste separation plan will work for them

Green initiative: The waste separation scheme will be made mandatory from September onwards.

WHILE residents of landed properties welcome the idea of separating domestic waste at the source, those living in high-rise buildings do not think it is feasible.

Some who were interviewed said they were not even aware of the mandatory “separation at source” plan that is to begin in September, while others say that indiscriminate dumping of garbage was still prevalent among such residents.

Hui Yin Chew, who lived at the Sri Pulau Pinang Flats in Cheras for almost 40 years, anticipated that the mandatory separation of recyclable and non-recyclable garbage would not go down well with flat dwellers.

“Most people are selfish and do not have the awareness of recycling or caring for the environment,” he added. Another resident, only known as Rama, said he had complained to the authorities many times about the indiscriminate dumping but it was in vain.

“The garbage disposal house in the common area is sometimes locked, how are we to throw rubbish?

“Our flats is in a bad condition, do something about it first,” he said.

“This requires the residents’ commitment to separate food waste and send it to the composting centres.

“Another method is to have the Anaerobic Digester facility that treats food waste and produces biogas,” she said.

Hartini added that SWCorp planned to increase public awareness via its Value Food, No Waste campaign, which called on the public to not waste food and manage food preparation better. 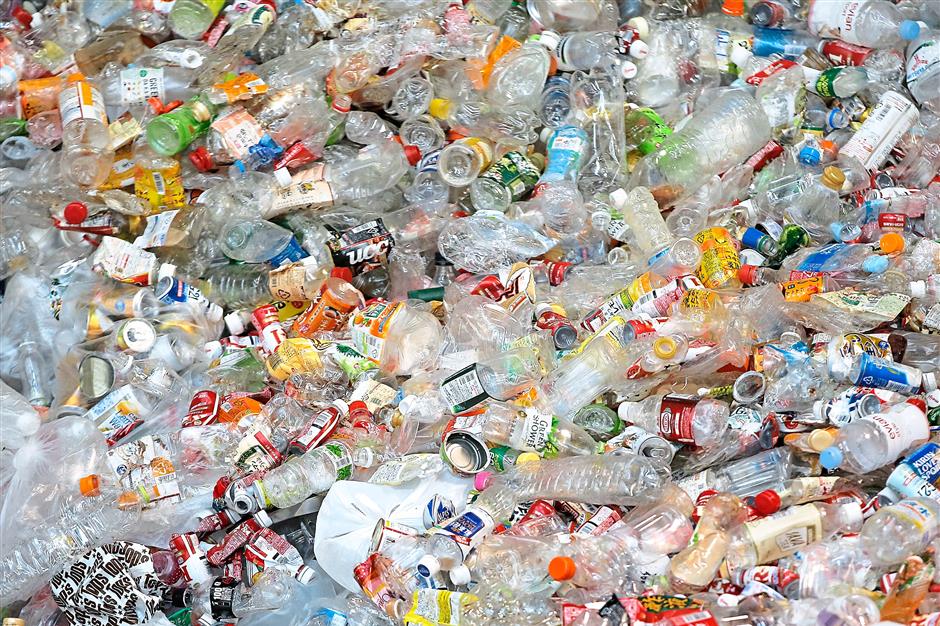 Detailed: Unsorted recyclable materials, including plastic bottles made of polyethylene terephthalate (PET), steel and aluminium cans sit in a pile as they wait to be processed at the Tsurumi Recycling Center in Japan — filepic

“Composting is one of the methods to reduce the amount of solid waste that are disposed of at dumpsites.

SWCorp is currently carrying out composting using the Takakura Home Method for those living in landed properties.

Alam Flora Sdn Bhd chief executive officer Mohd Zain Hassan said:“We spend millions of ringgit to train our workers to be professional drivers. We train them defensive driving and to manoeuvre in and out of narrow spaces.

“For flats (PPR/PA), we have planned to place cages at strategic places for recyclables. We have done this in Putrajaya and it is a success. But we need the cooperation from the public to not throw other wastes into the cage.”

Che Rozita Che Daud, a 41-year-old housewife, was seen putting a bag full of recyclable items outside her house in Putrajaya for collection.

Waste collection contractors then collected the recyclables and separated them into different categories such as paper, plastic, PET (polypropylene terephthalate) bottles, and non-recyclables in a lorry.

Her family moved to Putrajaya from Seri Kembangan six months ago and easily adapted to the waste separation culture as she had been doing it for years, thanks to her daughter’s school recycling programme.

“Plus, this is good for the environment,” she said. Back to nature: MPSJ makes its own compost from the waste collected and is available for sale. — filepic

“It was managed by Putrajaya Corp before SWCorp took over waste management duties in 2008. We did many activities to raise awareness.

Hamidah Abdullah who was seen taking recyclables to the centre, suggested that people should fold cardboard boxes when they dispose it for the convenience of waste collection contractors, so that it would not take up space.

“There are many benefits to practising waste separation at source; it keeps our house clean and it is good for the environment.

“I teach my domestic help to do it and as a reward, she gets to keep the money derived from selling recyclables,” she said.

Japan is known for its detailed waste separation, with up to 10 categories in some of the cities.

Waste have to be separated in designated bags, which are sold in grocery and convenience stores.

For example, in Kitakyushu City, the bags for household garbage are blue, for cans and glass it is brown, for PET bottles it is orange and the bags for plastic products are green.

In South Korea, recycling is mandatory and recycled items can be disposed of in any clear plastic bag.

In Seoul, garbage must be separated according to categories such as common garbage, food waste, recyclable, and bulk waste.

Those who do not dispose garbage in accordance to regulations would be fined.

Food waste must be separated from general waste and placed in special bags that can be bought in supermarkets and convenience stores.

Separation for food waste is very detailed as some items are not considered food waste such as bones, hard shells of fruits, and tea bags among others.

Each district has its own specific disposal bags and vary in cost and size.

In Australia, there is a separate kerbside collection service for co-mingled recyclables.

Source separation of organic wastes is also widely implemented in the eastern states of Australia, where local governments are increasingly adopting a three-bin kerbside collection system.

Local governments that encourage source separation into three or more waste streams are typically achieving resource recovery rates of about 50% to 60%.