WALKING up Sri Bintang proved to be one of the shorter hikes I have been on, covering a distance of just 3.3km in under 90 minutes.

Nonetheless, it was still a good workout as there were three ‘peaks’ of about 150m woven into the route.

The trail is referred to as Sri Bintang by nearby residents as the trail head starts in Taman Sri Bintang, Kepong.

Located behind Desa Park City, the trail actually features two little hills next to each other, both marked by pylons at the summit.

A short distance into the trail and the climb started immediately.

At the fork, we chose the uneven steps on the right, and kept to the right each time the path split. Our target: the pylon atop the next hill.

Skirting the fringe of the hillside, we could see glimpses of landed terrace houses below on our right.

We walk-climbed on hard-packed earth that wound its way up and down.

As the tree line thinned out, we emerged onto a grassy area and a quick time check told me we had covered 1km in 20 minutes.

Out in the open, we walked through knee-high grass, and could see all the way to the next hill where a high-tension pylon beckoned.

We followed a perimeter fence fortified by razor wire that climbed steeply up, breathing hard for about five minutes.

At the top, a 270-degree view opened up, with Desa Park City on one side, and the hill we came from behind us.

This is the only lookout point that offers such a wide angle of unblocked views.

We drank in the sights, and by consensus opted for a steep descent down the ‘rope slope’.

Comforted by the assurance that a rope would be available where it was needed most, I descended slowly, making sure to land with my entire foot flat with each step.

When I got to the rope, which was, of course, at the trickiest part, it made the going much easier.

Five minutes later, we were down.

At the base, the undergrowth was so thick that whatever semblance of a path had long since disappeared.

We had to beat a new path to the left, heading back up into the hill. This climb proved to be challenging, with no clear trail in sight.

Despite taking the path of least resistance, I found myself clambering over tree stumps and grabbing trunks, roots and vines to use as hand holds to pull myself up.

At the same time, I was careful to avoid touching any thorny vegetation that could leave vicious cuts.

My lungs were in overdrive as I crested the hill, exhausted but most satisfied.

We had expended a lot of energy to cover very little ground, just for the thrill of it.

In terms of horizontal distance, it was a mere 20m from where we were 20 minutes before.

The next part of the trail took us parallel to the highway, walking along one of the many cascading drains down the valley, just so that we could climb up again on the other side.

After about 1km, we emerged onto a barren flat area that reminded me of the wastelands in a Star Wars movie.

From this open space, we could see Segambut Dalam to the east, with Mont’Kiara beyond it. Trek to the top: Wide open vistas can be seen on the Sri Bintang trail.

We crossed the brownish yellow wasteland, which was marked by the deep scarring of narrow ruts merging into the packed red earth, before turning left and heading into the green hills again.

Under the cover of trees again, we cut left and discovered a makeshift gym at the top, complete with exercise bench, dumbbells, barbells and weights. It was like stepping into a DIY gym when I saw weightlifting equipment fashioned out of a Y-bar with tin-shaped concrete blocks at the ends.

There was also a strength training machine strung together with a bicycle handle bar and chain.

After a quick session of resistance and strength training exercises, we bid a reluctant farewell to this no-frills outdoor hilltop gym which was absolutely free (no joining fee or monthly subscription) and also naturally ventilated.

Deciding to take the most direct route for the return trip, a short five-minute downhill walk brought us back to the fork that was our starting point some 90 minutes earlier.

I followed the sound of trickling water to a small stream with clear water before retracing our steps to where we parked our cars.

The Sri Bintang trail is well-marked, with sufficient in-trails and short cuts to offer varied hikes in terms of distance and duration.

The chances of getting lost are minimal as it is a relatively small area with a maximum hike elevation of about 155m.

Sri Bintang is definitely recommended if you are on a tight schedule.

For a strenuous workout, hike from peak to peak repeatedly. Taking a criss-cross route will give you a moderate workout with respectable hike mileage. 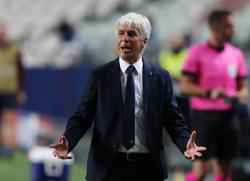 Atalanta's Gasperini left with 'great regret' after exit to PSG