Religious notes: The team of musicians accompanying the Anjaneyar chariot as it was pulled to the Batu Caves compound.

ANNUALLY, thousands of devotees and tourists pay a visit to the Batu Caves temple to participate in and witness the auspicious and holy celebration of Thaipusam.

Spotted among the crowd was Vimalan Shekar, 57, and his extended family of 20 members.

Vimalan, who journeyed from Johor to witness the celebrations at Batu Caves, said it was an exhilarating experience.

“We decided to come here this year as we wanted to experience something different. Thaipusam here is much more festive and there are a lot more activities going on.

“We also participated in the chariot procession, which was beautiful as it was all lighted up. Perhaps next year we may make another trip here,” he said. Record-making chariot: A devotee from the Persatuan Sri Rama Baktha Raja pulling the Anjaneyar chariot which carries a statue with faces of Hindu gods such as Hanuman and Garuda besides images of sacred animals such as the elephant and cow.


Sri Shangkar, 29, whose wife recently gave birth, took turns with his brother to carry the kavadi.

“My brother carried it up the steps while I carried it down. I’m doing this to give thanks for the birth of my son,” he said.

Amongst the throng of kavadi-bearers that led up to the Batu Caves temple, one in particular stood out.

A large Anjaneyar chariot, which carried a statue with faces of Hindu gods such as Hanuman and Garuda besides images of sacred animals such as the elephant and cow, was pulled via chains hooked onto the bodies of three brothers.

“As representatives of Sri Rama Baktha Raja Association, my brothers took two-and-a-half hours to walk along the 20km stretch to the temple,” said Parveen Marthmmuthu, 29.

The chariot that took four to five months to construct had in fact made its way into the Malaysia Book of Records as the biggest Anjaneyar chariot this year. A test of faith: Molly Tan (left) and Tania Wong after their journey up the 272 steps to offer ‘paal kudam’ to Lord Murugan for their first time.


Parveen said, “The purpose of pulling such an elaborate chariot is to create awareness among the youth about the Indian culture and its traditions.”

Wearing the customary saffron-coloured Punjabi suit was devotee Molly Tan, who had just completed her journey up to the Murugan temple to convey her hopes for a better year ahead by offering a paal kudam.

Accompanying her was her colleague Tania Wong, who happily confessed that the trip up and down the steps was quick and not as tiring as she had expected.

Wilson Tan, a 32-year-old model and actor hailing from Perak, said it was first experience of Thaipusam in Kuala Lumpur and it had been amazing.

“I have a newfound respect for the Hindu devotees and the sacrifices they make.”

German exchange student Tobias Goebel, 25, was seen among the crowd outside the temple premises, capturing on camera the scene of kavadi-bearers walking barefoot along the road with crowds of supporters closing in on them. 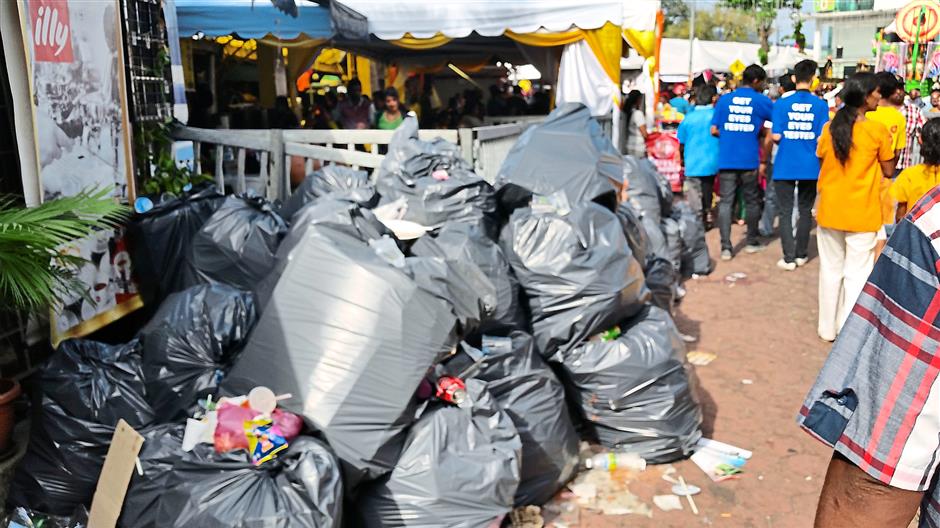 Good effort: In light of the ‘Litter-Free Thaipusam 2015’ campaign, the relevant authorities had made an effort to collect rubbish in a more responsible manner.


Goebel, who studies in Singapore and visits Malaysia almost every other weekend, said his trip this time was specifically to see the Thaipusam celebration.

“The atmosphere here is rather difficult to describe in words; it’s mesmerising to see these devotees get into a trance,” he said.

Apart from tourists, this year’s Thaipusam saw the presence of volunteers from the Malaysian Plastics Manufacturers Association (MPMA) helping in the “Don’t be a litterbug” campaign within the temple grounds.

These volunteers were stationed next to waste disposal bins to advise visitors to discard their rubbish responsibly.

Other activities that took place yesterday was a blood donation drive hosted by Sathya Sai Baba and free eye tests for those aged 55 and above conducted by Tun Hussein Onn National Eye Hospital and the Yenippadigaul Kuala Lumpur charity organisation.