Authentic: Sio preparing her famous popiah at the stall in Hock Seng Restaurant. (Above) Customers can choose the egg popiah (front) or the traditional one using flour dough.

THE month of February has The Star People’s Food Awards featuring the Best Popiah category.

Do you have a favourite stall in mind?

To make a nomination, all you have to do is visit your favourite eatery or stall and take a photo of the meal you want to feature. The photos must be your own. It should not be taken from blogs or websites and must be no less than 1MB in size.

You should say something about the food and post your nomination on Metro Online Broadcast (mob.com.my) to stand a chance to win attractive prizes such as hotel stays and dining vouchers.

For details on how to nominate, endorse and vote, visit MOB and click the “Foodboard” tab under The Star People’s Food Awards to read the FAQs.

Those who nominate, vote or successfully share a link stand a chance of winning the prizes.

Nominations are open for the first 10 days of the month, followed by voting from Feb 15 to 28.

Every month until May, the public can vote for the best category-based street food with the next food category being curry laksa.

Nestled among bustling Chinese hawker stalls in Hock Seng Restaurant is one stall going by the name of Egg Popiah.

As the name suggests, this stall sells not only the traditional kind of popiah but also the one wrapped with homemade egg skin.

“I wake up at 5am every day to make the egg skin, used as a wrap for my popiah, before opening my stall at 7am,” said stall owner Sio Lean Heoh.

The 53-year-old uses about 23 eggs to make a batch of egg skin, which has a crepe-like texture.

Customers can choose to have the egg skin or the normal thin flour dough as a wrap.

For the filling, she uses the traditional ingredients such as radish, cucumber, bean sprouts, egg strips, peanuts, sweet sauce and homemade chilli paste.

What’s interesting about this popiah is that she also puts in bits of prawn flour batter, to give it a little crunch.

“I’ve been making popiah this way ever since I took over the stall from my brother 20 years ago.

“He was running it with his wife for many years before handing it to me,” she said.

Her brother now manages a noodle soup stall in the same restaurant.

“We have never moved. But I think this business will end with me because all my children are already working and not interested in the food business,” she said.

The popiah here tasted authentic and just to our liking.

Customers can even ask her to moisten the popiah in some radish soup or just leave it dry.

Sio’s popiah is priced at RM2 for the original variety and RM2.50 for the egg popiah.

In a typical Chinese kopitiam with stalls serving a decent selection of dishes, QSQ Popiah is known for its crispy version of the traditional snack.

A family recipe, QSQ Popiah is famed not only for its original Crispy Popiah, but also for an inventive seaweed version of the Malaysian favourite.

Generally, popiah skin is made from wheat flour and resembles a crepe, which is wrapped around a staple mixture of vegetables and fillings that may include anything from dried shrimp to slices of Chinese sausage (lap cheong).

However, the ingredient that makes QSQ pork-free popiah stand out is the crispy bits of batter that gives an additional crunchy texture.

Finely grated strips of carrots, cucumbers and jicama (or Mexican turnip), better known as sengkuang, make up the fresh vegetable mixture along with subtly sweet flavours of the stewed sengkuang.

A sprinkling of crushed peanuts, fried shallots (bawang goreng) and fried slivers of egg tops off the dish by providing that much-needed saltiness while adding to the dish’s diverse flavours.

“I started the business with my friend Khoo Mei Lee, using my mother’s recipe that we modified,” she said.

The Crispy Popiah is priced at RM2.20.

With approximately 30 stalls around the Klang Valley and Kuala Lumpur, the stall in PJ New Town has been operating for the past six years. 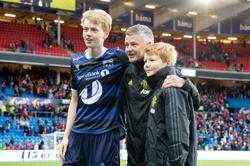