Cracker in store at the Bridge 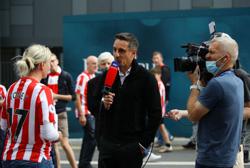 De Bruyne is likely to start for City today, which is good news for visitors to Stamford Bridge. — Reuters

THERE is a feast of sorts in the Premier League this weekend, with top billing featuring the two teams widely tipped to take the challenge for the title down to the wire.

Indeed, the clash between table-toppers Chelsea and champions Manchester City at Stamford Bridge in the early kick-off today is expected to be a fiercely and closely fought battle by the two sides that are evenly matched to win English football’s biggest prize next May.

No doubt those with allegiances to Liverpool, and maybe even Man United, will hasten to object, putting forward a case that they too are well and truly in the frame. That may be so, and with some substance too.

But with a calm disposition, it is easy to see why Chelsea and City are being touted as the favourites. With this, their coming together today looks like nothing short of one outfit cancelling out the other in a drawn fixture, and borne out by a feisty atmosphere.

Both sides are loaded with talent — individually and collectively. City, for their part, appear to have the greater depth in reserve, but perhaps it is Chelsea who will start with a marginal advantage, given that they are playing at home.

Romelu Lukaku, who rejoined the Blues in the off-season and returned a much more complete player, should again be their point of focus.

The burly Belgian, in fine fettle in front of goal — just like he was at Inter Milan last season, which prompted the Londoners to part with some £97.5mil (RM560mil) — will lead a side that had 10 different players score this season, after Antonio Rudiger knocked in their third against Spurs last weekend.

Chelsea manager Thomas Tuchel is hoping to have goalkeeper Edouard Mendy back in the side for today’s showdown. The French-born Senegal international missed the Tottenham game through an injury sustained in the Champions League match against Zenit St Petersburg last week and was also absent from the Carabao Cup tie against Aston Villa on Wednesday.

The Blues barely got through to the fourth round of the Carabao Cup, seeing off Villa in a penalty shoot-out, albeit with a team made up of “fringe” players. Tuchel will surely field a changed line-up from the one he used in the midweek Cup game.

Guardiola too is expected to make changes to his starting XI, with a return to the side of his regular rearguard. In the Carabao Cup game, which saw them hit Wycombe Wanderers for six, the Spaniard fielded four teenagers at the back and should recall the likes of defenders Kyle Walker, Ruben Dias, Nathan Ake and Joao Cancelo, and goalkeeper Ederson to face the Blues.

Nineteen-year-old Cole Palmer scored his first goal for City in midweek and Josh Wilson-Esbrand, also 19, had a hand in creating the second of their six, and is also one to watch in the future. It is highly unlikely they will be called upon to face Chelsea — but it would be interesting if they were.

Guardiola was encouraged by Kevin De Bruyne starting only his second game of the season against Wycombe as he continues his recovery from injury, and Phil Foden, who was also in action and returning from the treatment table. Both could figure in today’s game, more so De Bruyne dictating things in the midfield with his creativeness.

City failed to score against Southampton last weekend and Guardiola will most certainly have been working on this. Fernandinho, Jack Grealish, Raheem Sterling and IIkay Gundogan are also likely to return to the side today, with Riyad Mahrez and Bernardo Silva providing the support to the front six.

But regardless of who City opt for, their fans will be demanding that they do not drop any points today and that against one of their fiercest rivals.

The Citizens are in fifth spot in the league standings behind surprise package Brighton and are three points off leaders Chelsea, who find themselves in a three-way tie at the top.

The way things stand, if there is a winner today, that is the club who may well go on and take the title. All the same, it could turn out to be a rather feisty affair at the Bridge today.