Malaysian runners share the joy of running and seeing the world

Running is one of the few sports that you can do on your own, which is perfect for today’s physical distancing era. All you truly need to get started is a pair of running shoes and a safe running route.

Besides, what’s not to love about feeling the wind in your hair, taking the next step, and accomplishing new personal records?

For many runners, the first goal is to compete in a marathon. Subsequently, these runners may want to “upgrade” their running journey and participate in well-known marathon events in the region or around the world. Being able to join any one of the Abbott World Marathon Majors – Tokyo, Berlin, London, Chicago, New York and Boston – may just be the ultimate dream for some folks.

Among the many appeals of joining an international marathon event abroad is the chance to make a holiday out of it. You can even bring your family or friends along with you, and make them your personal cheering squad!

Three Malaysian runners share their passion for running and the most memorable marathon events they’ve ever participated in.

Making new friends and fostering a strong community spirit are some of the few plus points of running.

This rings true for Calvin Chin Min Khai, 49, who has been running and joining marathons with a group of like-minded folks ever since he started his running journey years ago.

Dubbed Team Super Rookies, or TSR for short, the group initially did 5km runs before progressing to 10km and 12km races. The camaraderie among group members – 13 of them including Chin – makes it easier for the group to train safely and without much fuss.

When they decided to join a half marathon event (21km), they trained every weekend and focused on building their stamina rather than just increasing their speed. The group members were committed to not just finish the run but make sure everyone had fun too.

Chin himself was spurred on to run a solo marathon by the group’s captain, who regaled the group with stories of how a runner’s life would change (for the better) once they’ve joined a full marathon.

He finally got the confidence to do so in 2011, when he joined his first 42km run in the Singapore Sundown Marathon – a night run!

“It gave me the confidence to try out new things and to challenge myself in everything I do. Over the years, I have taken part in 17 other full marathons, and I have managed to complete each one of them within the sub-five timing (finishing in under five hours) and I am truly happy with myself for this achievement, ” Chin said proudly.

Chin has done so well for himself in his running journey that he has even joined other types of marathon events like trail running and an ultra marathon. An ultra marathon is an event that goes beyond the 42km mark – usually at 50km, 75km and 100km. (Sidenote: The longest sanctioned footrace in the world is the Sri Chinmoy Self Trancendence in the United States, which is 5,000km long!)

He reveals that one of his proudest running moments was crossing the finishing line at the Vibram Hong Kong 100 race in 2019.

“As I crossed the finish line, the euphoria and sense of accomplishment was a feeling I’ve never experienced before.

“Having spent a whole day and night running on the trail, it really opened my eyes to what one is capable of once we set our minds to do it, ” Chin said proudly.

For 52-year-old Dorothy Empam, her running journey began after climbing Mouth Kinabalu in 2013 with her friends.

At the time, Empam was still “high” from scaling the 4,095m-tall mountain and had the inexplicable urge to achieve something else. 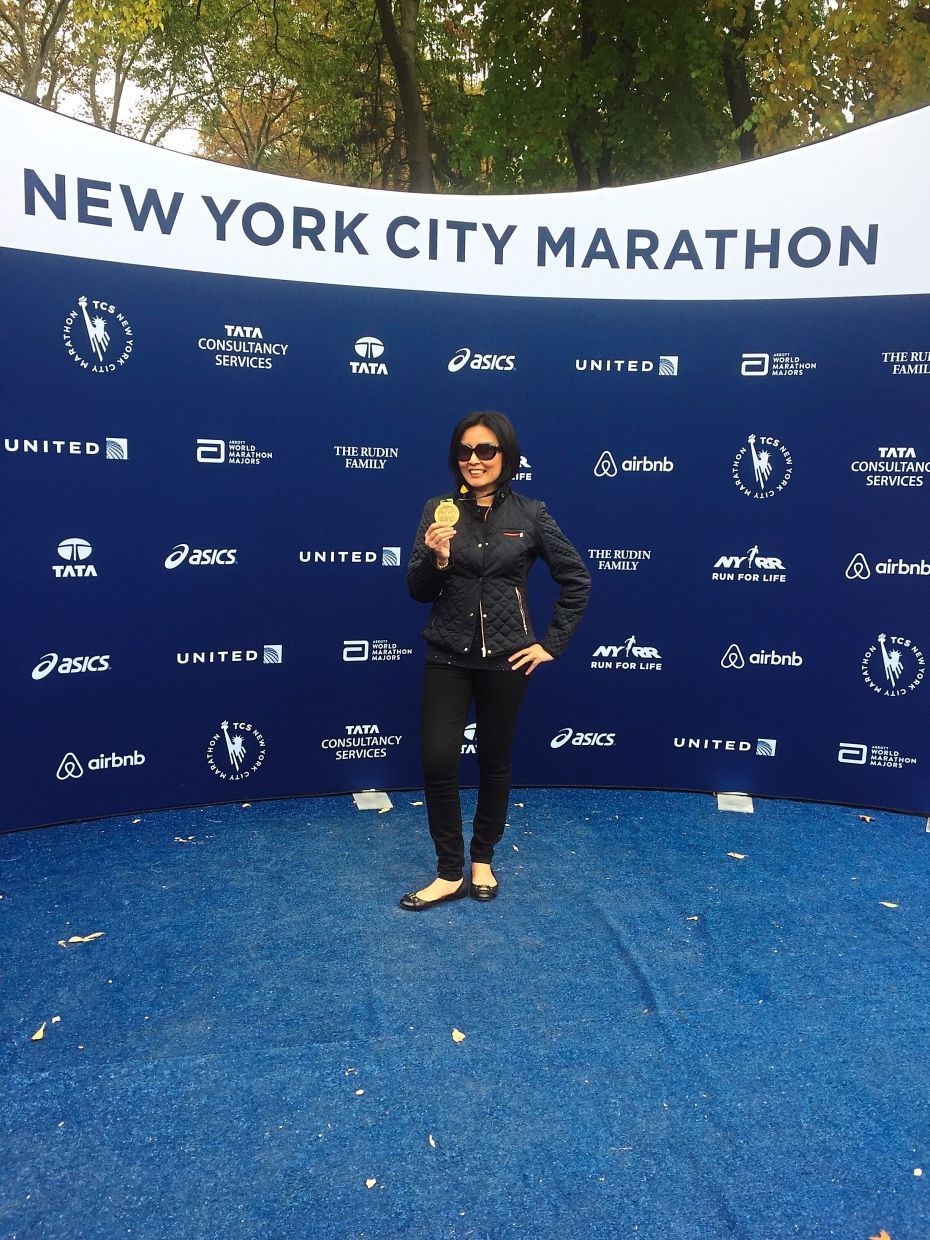 Empam ran the New York City Marathon in 2015. — DOROTHY EMPAMThat something else turned out to be running marathons.

Thus began Empam’s marathon-running adventures with her group of running kaki, who call themselves The Running Hajjahs.

But to the communications director, participating in a marathon goes beyond running. The 2014 London Marathon, for example, was also a charity event meant to raise awareness for people with complex disabilities. At the time, Empam was also running in honour of her sister who was diagnosed with cancer.

“It somehow gave me a sense of purpose to be able to do something for those less fortunate than us, ” she said.

Empam loved running the London and New York marathons because of the different atmosphere and energy each event brought.

For one, those marathons start at 9am or 10am, and not in the wee hours of the morning like most running events in South-East Asia do.

She loved how the crowd would join in the celebration too, and how they were willing to come out and support total strangers running in the marathon. Empam said that apart from cheering, some people would even hand out bananas and power bars, and even wet tissues!

Empam also noted that it is normal for those who are new to running marathons to feel a little jittery at the starting line, but the sense of achievement you get at the finish line is worth every step you take.

“Just put one foot forward at a time, and before you know it, you would have completed 42km! Think of the bragging rights and the medals you get to have once you’ve done it, ” she said cheekily.

On her 30th birthday, Ashley Greig made a resolution to try something new every year. That year, she got her own place. Then she took up boxing at 31. When she turned 32, she decided to start her running journey.

An English lecturer at Monash University, Greig recognised the importance of starting things easy and began running up to 5km at a time. 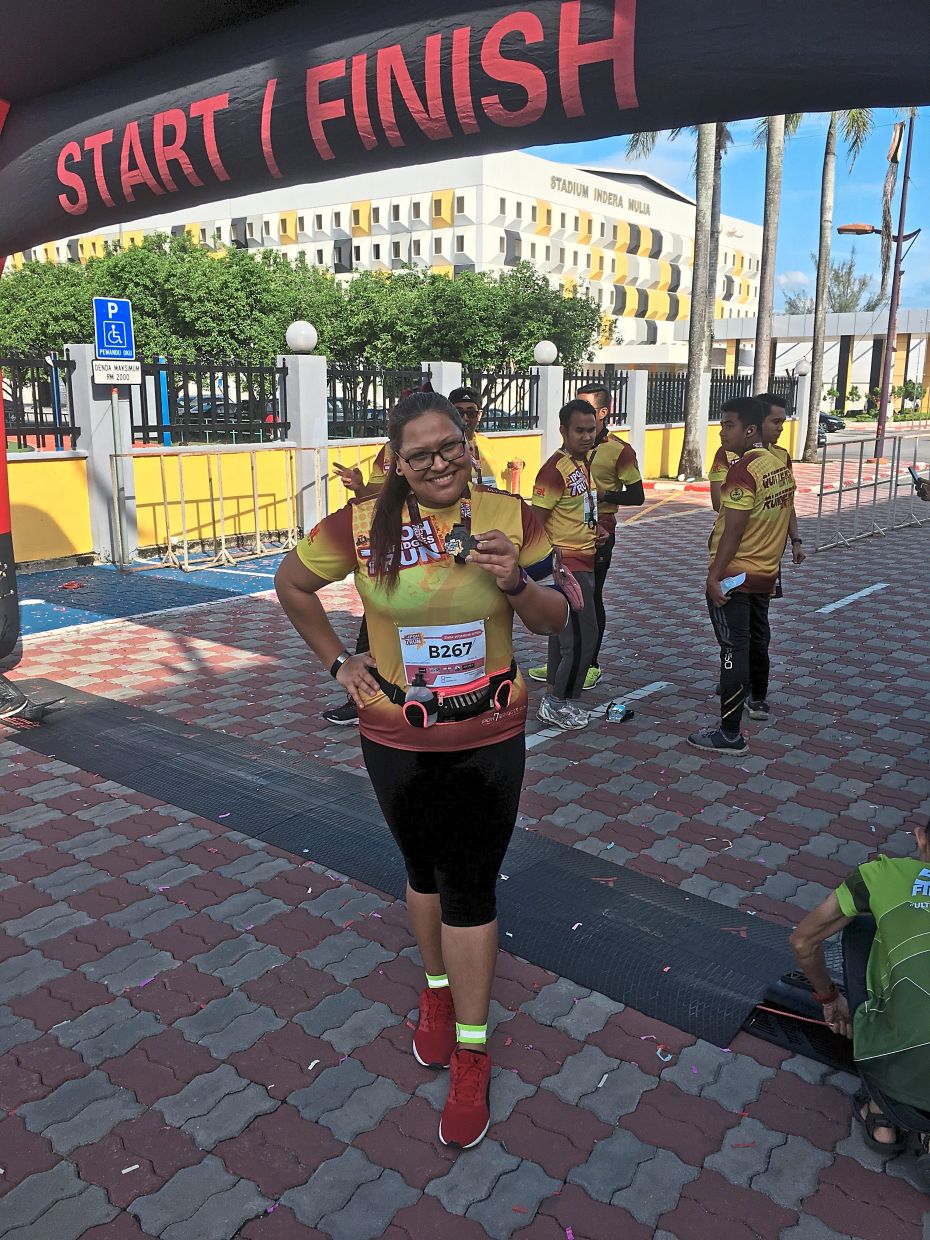 Greig at the Ipoh 7 Bridges Run in 2019. — ASHLEY GREIGBut like many new beginnings, there are always challenges. Although she is proud of her progress, Greig expressed how it had not been easy for her to start running initially as she was overweight. “For someone who couldn’t even sustain walking 500m at one point, finishing a 21km run was pretty awesome.”

“I’m excited to see how far my body is capable of going. This makes me continue running and pushing myself even further, ” said Greig, who is now 34.

She shares that she has joined a number of marathons in the past two years, including the Ipoh 7 Bridges Run in Perak, and the Larian Antarabangsa Jambatan Sultan Mahmud in Kuala Terengganu. For her, participating in outstation running events is enjoyable as she gets to experience what it’s like being in a new environment. That being said, running in Ipoh, where she used to spend some time as a child, always gives her a different kind of feeling.

“Imagine growing up with this teddy bear and you’re familiar with its smell, touch and size. Then you somehow lose it. Then years later you find it again, and it brings you this strange joy and sense of fulfillment as you hold it. That’s what it feels like whenever I run in Ipoh – it’s like being home, ” said Greig.

Being a city girl from Kuala Lumpur, Greig feels it is a refreshing experience for her to run outside of the city.

“I have run along padi fields and by the beach or riverside. I’ve also passed through quaint villages and jungles too, ” she said. These days, she only runs around her housing area which, although safe, can get quite boring.

She looks forward to being able to run in new destinaions again and going through unfamiliar routes.