After falling in love with Malaysia during a short trip here three years ago, Greg Gouras and Jo Mae Oraa decided to return and begin their South-East Asia trip from Kuala Lumpur.

So the American couple left their jobs in New York, packed their bags and hopped on the plane to Malaysia in March this year.

“As food lovers, it is the perfect place to be, ” Gouras, 33, and Oraa, 30, said about Malaysia in an email interview.

Little did they know that the Covid-19 pandemic would blow up and change the world as everyone knows it.

“One week after we arrived in KL, the movement control order (MCO) was announced, ” they said in their joint statement. Gouras (left) and Oraa are glad that they stayed back in Malaysia. — GREG GOURAS/JO MAE ORAA

The MCO was implemented on March 18 to curb the spread of the coronavirus. During this time, Malaysian citizens and Permanent Residents are not allowed to travel abroad.

The same kind of travel ban, however, is not imposed on international visitors who wish to return to their home country.

The full-time travellers decided to stay put in KL and they are glad they made that decision. When domestic tourism activities finally resumed during the recovery MCO phase sometime in July, the couple immediately pursued their wanderlust.

“Thanks to staying in Malaysia longer, we got to visit places like Kuala Terengganu, Pulau Perhentian, Pulau Redang, Kuantan and Pulau Tioman that we never would have otherwise, ” they said. Another traveller who has decided to stay put in Malaysia is Ken Döscher, 28. The Star interviewed him earlier this year about his experience of being stranded in KL during the MCO.

These days, the German tourist is more upbeat about his experiences here.

“I started to travel around Malaysia when interstate travelling was allowed again in June. I have been exploring the country since then, ” he said. .Döscher eating Ikan Kerlis for the first time in Kota Bharu.Döscher has no immediate plans to return to his home country anytime soon.

“Luckily, tourists here are allowed to stay and I am really happy about that, ” he said, adding that he feels fortunate to be able to “explore Malaysia now to the fullest”.

Ipoh, Cameron Highlands and Taiping are some of the places Döscher has travelled to so far. He was recently in Johor where he got to check out Kampung Parit Jerman in Pontian. He plans to visit more places in Malaysia before moving on to other countries in the region once borders reopen.

According to Döscher, travelling in Malaysia amid a pandemic has not been too different or difficult.

“Of course, some places are closed or are not operating fully because of Covid-19, but other than that it feels quite ‘normal’ for me to travel during this time, ” he said.

He does, however, stress the importance of following all existing standard operating procedure (SOP) to keep safe.

“Following the SOP guidelines and wearing a mask, for example, has become so normal for me now. It would feel ‘wrong’ to not wear a mask, ” Döscher said.

“Now is the best time to travel domestically as places won’t be as crowded as normal, and many hotels are offering discounts due to Covid-19, ” they said.

When The Star first interviewed the couple a few months ago, they had decided to stay put back then due to exorbitant flight fares to return to their home country.

“We feel grateful that we are still allowed to stay in Malaysia since the beginning of the MCO. We are having too much fun discovering new cultures, food, people, and natural beauty, ” both Greig and Wibowo said in their joint reply. 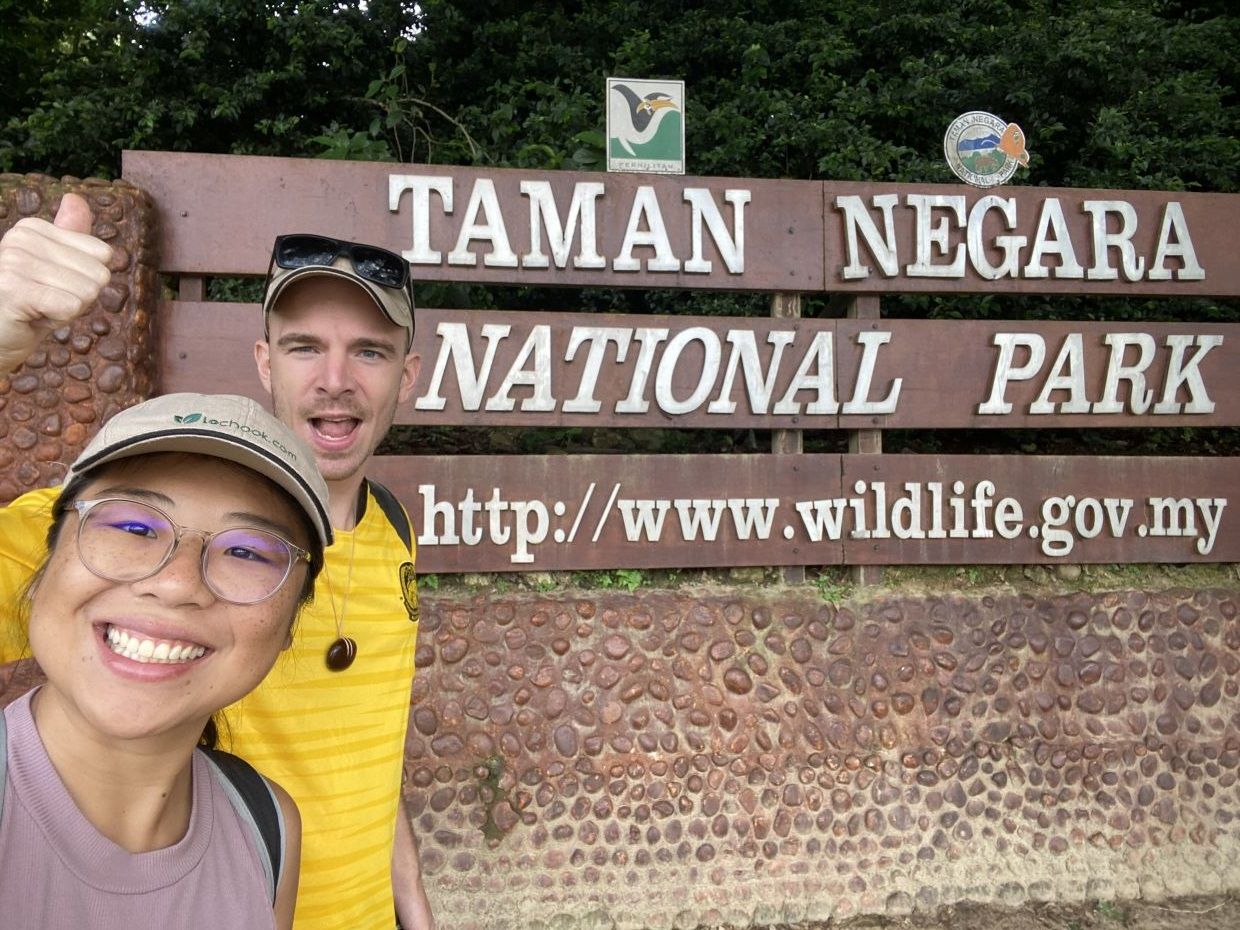 Greig (right) and Wibowo said now is a good time to see the country as most places are not as packed. — STEVE GREIG/IVANA WIBOWO

Since then, the couple has indulged in many local experiences during their stay.

“We were in KL during the MCO, and our first trip from KL was to Terengganu. We stayed in Kuala Terengganu, tried nasi dagang and keropok lekor, went candat sotong (squid jigging), and also visited the beautiful Kapas and Perhentian islands, ” they said.

Greig and Wibowo even got to celebrate Hari Raya Haji with a local family in Melaka.

“Celebrating Hari Raya was a very special occasion. We also loved our roadtrip experience across four states with our friends – discovering hidden gems and the kampung life, ” the couple said.

Greig and Wibowo added that they have not faced any difficulties while travelling in the time of a pandemic.

“All buses and other forms of transportation always run on time, the roads are in good condition, people are so welcoming, and hotels never rejected us. Well, so far so good!” they said.

These travellers are all documenting their journey around Malaysia on their respective YouTube channels: Gouras and Oraa on Food And Footprints; Döscher on Ken Abroad; and Greig and Wibowo on JetLag Warriors. Other popular vloggers who are also “stuck” in Malaysia include the Travelgramers, Moonshine And Lemongrass, and Remote Darren, and every now and then some of them would meet up and create collaborative videos together.

If anything, these travel vloggers have somewhat become accidental tourism ambassadors for Malaysia.

(On the food and foodie front, we have the incredibly popular Trevor James aka The Food Ranger, one of YouTube’s top food vloggers with 4.66 million subscribers, who has been actively promoting Malaysian street food during the MCO; he is currently based in KL.)

Their videos – some of which have garnered over tens of thousands of views – showcase great Malaysian travel experiences and are viewed by a global audience. Greig and Wibowo enjoyed their time in the historic city of Melaka.

This scenario certainly plays well into the Tourism, Arts and Culture Ministry’s hopes to tap into social media to boost the country’s tourism sector.

“Among the initiatives we’re set to engage with our partners include up-to-date tourism promotional campaigns, live feeds or updates on our flagship event destinations and venue promotions, ” he said during an event in August.

Kitingan also highlighted some studies which showed that users tend to seek content creators’ reviews whenever they wanted to know more about a particular subject.

In another study, data analytics company GlobalData pointed out that millennial content creators will be indispensable in the recovery of the tourism industry.

Elite and young independent travellers, according to the study, are crucial to the recovery of the travel sector as they are likely to be the first people to embark on leisure travel, internationally.

“Amid the pandemic, consumer habits have changed and the importance of having an effective social media presence has been heightened.

“Social media traffic has dramatically increased as consumers have utilised this as a tool to escape stringent lockdown restrictions, ” she said.

The study further revealed that Twitter and YouTube have been the most widely used platforms for travel campaigning during Covid-19.

For Döscher, however, vlogging is just a means to document his journey here.

“In my videos I like to show the ‘real side’ of Malaysia. The focus in my videos is to get to know Malaysia and its people and not only showing tourist spots.

“I like to visit local places, where locals go to eat, local markets or spots where Malaysians like to hang out, ” he said. The vloggers themselves have garnered quite a following, too, especially among Malaysian viewers.

The comment sections of their videos are often inundated with recommendations from locals eager to show these international visitors their beloved home states.

Gouras and Oraa said it’s a pleasant experience to meet some Malaysians who watch their videos.

“The hospitality we have received from locals has been absolutely incredible, ” they said. The couple has even received an invitation to stay at a durian farm in Raub, Pahang, while some of the others were invited by the Terengganu Football Club to meet a few players and check out the Sultan Mizan Zainal Abidin Stadium in Kuala Terengganu.

According to Greig and Wibowo, their favourite thing about Malaysia is her people.

“Everyone is so friendly and welcoming. We can tell that Malaysians really want us to have the best experience while we are here, ” they say.

Döscher, who always tries to say a few words in Bahasa Malaysia wherever he goes, said some of his best experiences are related to the locals he has met on his journey.

“During my whole trip I met nothing but friendly people. Everyone is super open and friendly towards me, especially in the small kampungs.

“That is the most memorable experience I am going to take home; how friendly people are in Malaysia and their great hospitality, ” he said.