The pyramids at Tikal in Guatemala.

The extra-large barf bags in the tiny plane aren’t exactly reassuring. But the 33-minute flight to Lake Peten Itza from Guatemala City is thankfully smooth, and it takes you to a completely different world.

Away from the street vendors and exhaust clouds, you’re now high up north on your way to Tikal. This Mayan ruin is reached via an hour’s drive through lush tropical green.

In Tikal, Mayan priest Gilberto Chayax is preparing a ritual on the main square of the ruins. The 80-year-old priest is a guardian of the nearly extinct Itza’ language. Only 60 people still speak it, he says. He lights a fire for the new arrivals and addresses the “creator who made the earth, the forest, the animals and all that we see, including ourselves”. Guatemala has a lot of green jungle, home to a colourful variety of wildlife.During the blessing, Chayax retreats into himself, with his arms crossed and his eyes closed. The priest takes sips of a high-proof beverage and spits it directly into the fire, so that it ignites. He later reveals that in his litany he has asked for the guests to receive “permission to visit Tikal and the holy places”.

The Tikal site leads you into the past of the Maya. It was the heart of a powerful regional state that existed until about 900 AD, with many as 80,000 people living here. Temples, carved stelae and connecting paths are still visible today. But little of Tikal has been excavated so far, travel guide Emilio Faillace explains.

The highlight of the site is the Great Plaza and its two pyramids, where 140 steps lead you up to the sky. The views over the rainforest and the stone structures are fantastic.

But Tikal is just one of many sites for culturally engaged travellers to Guatemala. An open-air museum of archaeology is located in Yaxha, near the lake of the same name. The extensive Mayan site was home to sun worship and astronomical observations. 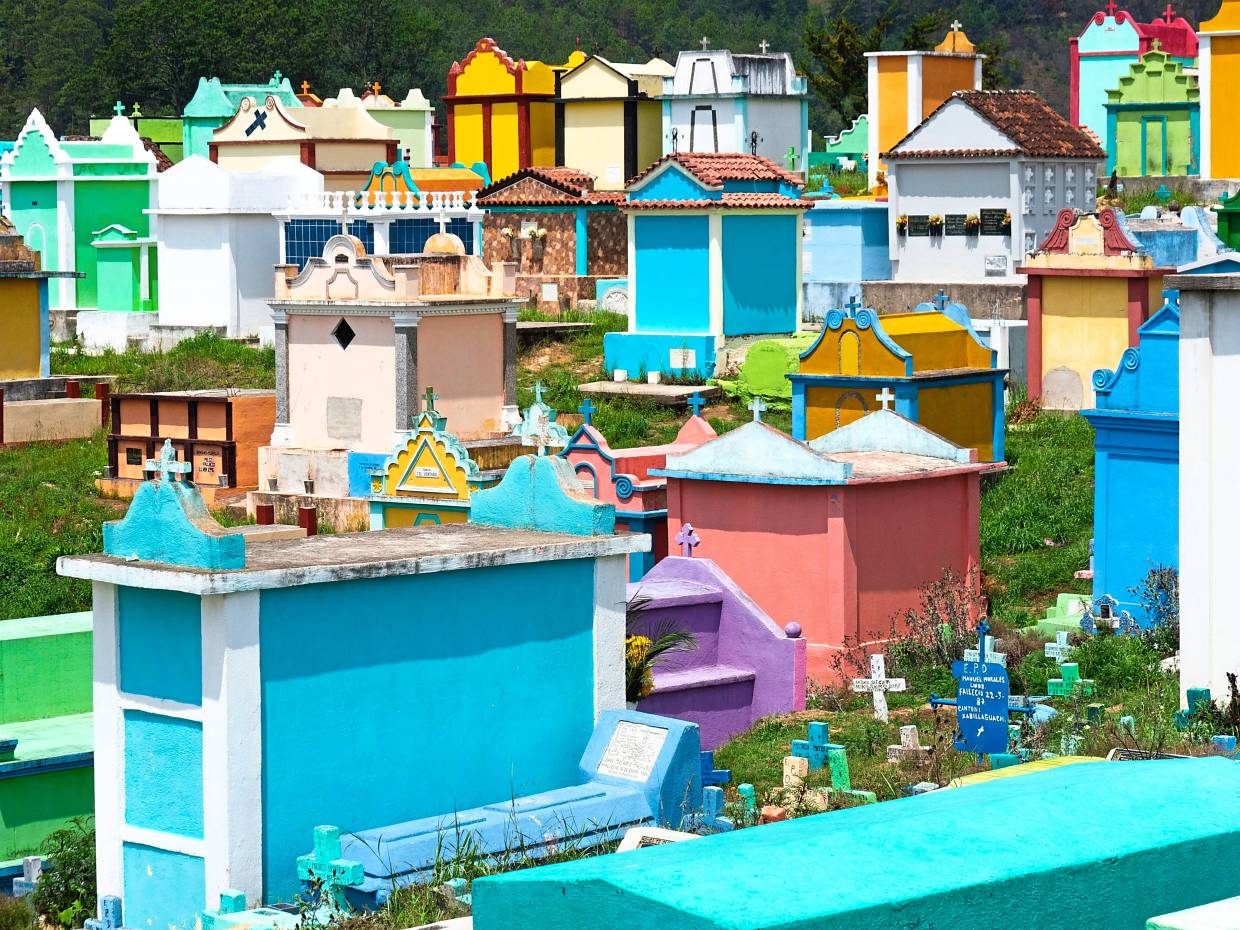 The colourful Chichicastenango cemetery in Guatemala.

The jungle in Yaxha pushes itself even closer to the ruins than in Tikal, as if it’s trying to reclaim the terrain. Huge trees grow on the temple ruins, and roots surround the historical structures like tentacles. You can feel the constant screams of the howler monkeys in your bones.

In the highlands of Guatemala, Christian and Mayan traditions meet in Chichicastenango. The pilgrimage church of Santo Tomas was built by Christian Spaniards on top of a destroyed Mayan temple.

At the entrance today, Mayan priests and priestesses stand with cans of incense, which also fog the interior of the church. The candlelight in the twilight and the prayers of the faithful, who walk the way to the altar on their knees, give the church a mystical aura.

Faith is deeply rooted in the life of the inhabitants of Chichicastenango. Tuk-tuk driver Rigoberto Riquiac Conoz always seeks out a priest “when business is bad”. His blessing costs him up to 1,000 quetzals (US$130/RM530). It’s a lot of money in Guatemala, but the priest also has to make a living, he says. – dpa/Andreas Drouve