The mighty Daishoji River runs across the Kakusenkei Gorge, which is just a short walk from the Yamanaka Onsen. Photo: Kaga City Office

The locals at Kaga City have a saying – blessings from the mountain and the sea.

And one visit to the place is enough to make you feel like heaven itself has embraced this charming Japanese city in the southwestern part of the Ishikawa Prefecture in Japan.

With a population of not more than 70,000 people, Kaga City is strategically located between the Sea of Japan and the Hakusan Mountain range, one of Japan’s three sacred mountains. The local produce is abundant and fresh, making the gastronomical experience here is otherworldly.

But the city is also blessed with something else, something from deep within the Earth: Natural hot springs or onsen.

This of course is not uncommon in Japan. What makes Kaga special, though, is that it is one of the rare Japanese cities which is home to not one but three onsen towns within the same municipality.

It is in one of these onsen towns that our journey begins.

Right before this trip, organised by the Malaysian Association of Tour and Travel Agents, I had the unfortunate case of the cold, a cough and lower back pain – or as I called it, my “travel curse”.

This made mobility really difficult and comfort seemed like a distant friend. And the cold weather at Kaga didn’t help either. Being mid-autumn, it was barely 10°C.

After nearly an eight-hour flight to Osaka, and another four-hour bus ride to West Kanazawa, all I could think about when we finally arrived at our destination was disrobing without a moment of hesitation in front of strangers and soaking into one of the hot spring baths said to possess healing powers.

But like all good things, this excursion had to wait.

A breath of fresh air

Our first pit stop was the famous historic Omicho Market in Kanazawa (the capital of Ishikawa Prefecture), just a 15-minute walk from the Kanazawa Station.

A quick stroll in this nearly 300-year-old covered food market which houses almost 180 shops would explain why it’s described as Kanazawa’s local kitchen. Every shop was just bursting with colours and flavours of local produce and fresh seafood. Blessings from the mountain and the sea indeed. 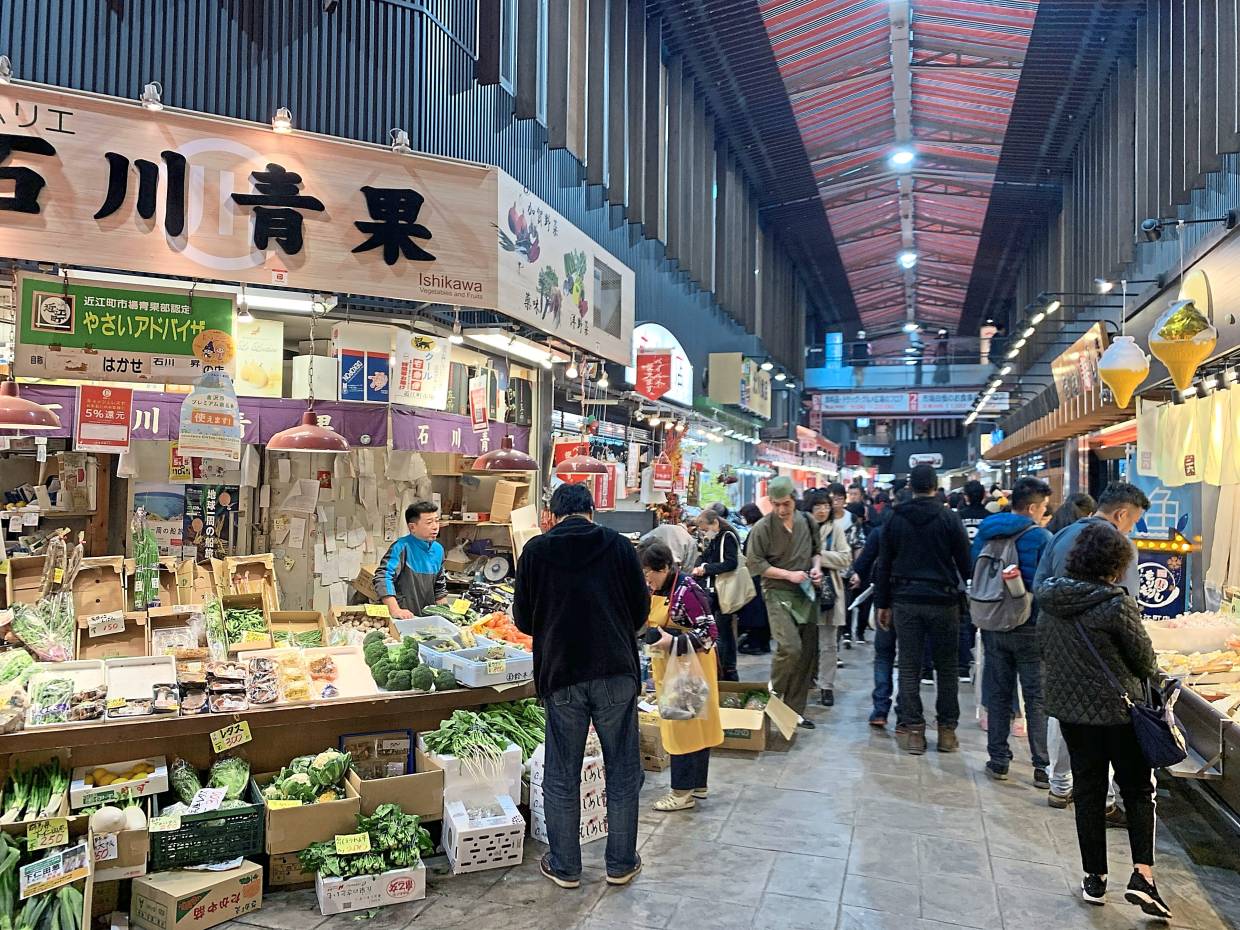 The nearly 300-year-old Omicho Market in Kanazawa is rightly called the local kitchen, with its abundance of fresh produce and seafood. DINESH KUMAR MAGANATHANThe Star

From seasonal crabs to local strawberries, you will be spoilt for choice. Think of this as a market version of Honeydukes, the famous wizarding sweet shop in the Harry Potter universe.

And if the fresh food stalls are not enough to whet your appetite, check out the many restaurants serving scrumptious kaisen don with the freshest sashimi around.

Sake fans can check out the 100-year-old Sake no Ohzawa Jizake Ichiba store, where you can find a good range of the drink, all brewed locally.

If you’re planning to visit the Kenrokuen Garden, be sure to wear proper shoes. The place stretches for over 114,000sq m and was originally the outer garden of Kanazawa Castle in the 17th century. There are many winding streams, beautiful ponds, monuments and statues, as well as historical tea houses to enjoy there. 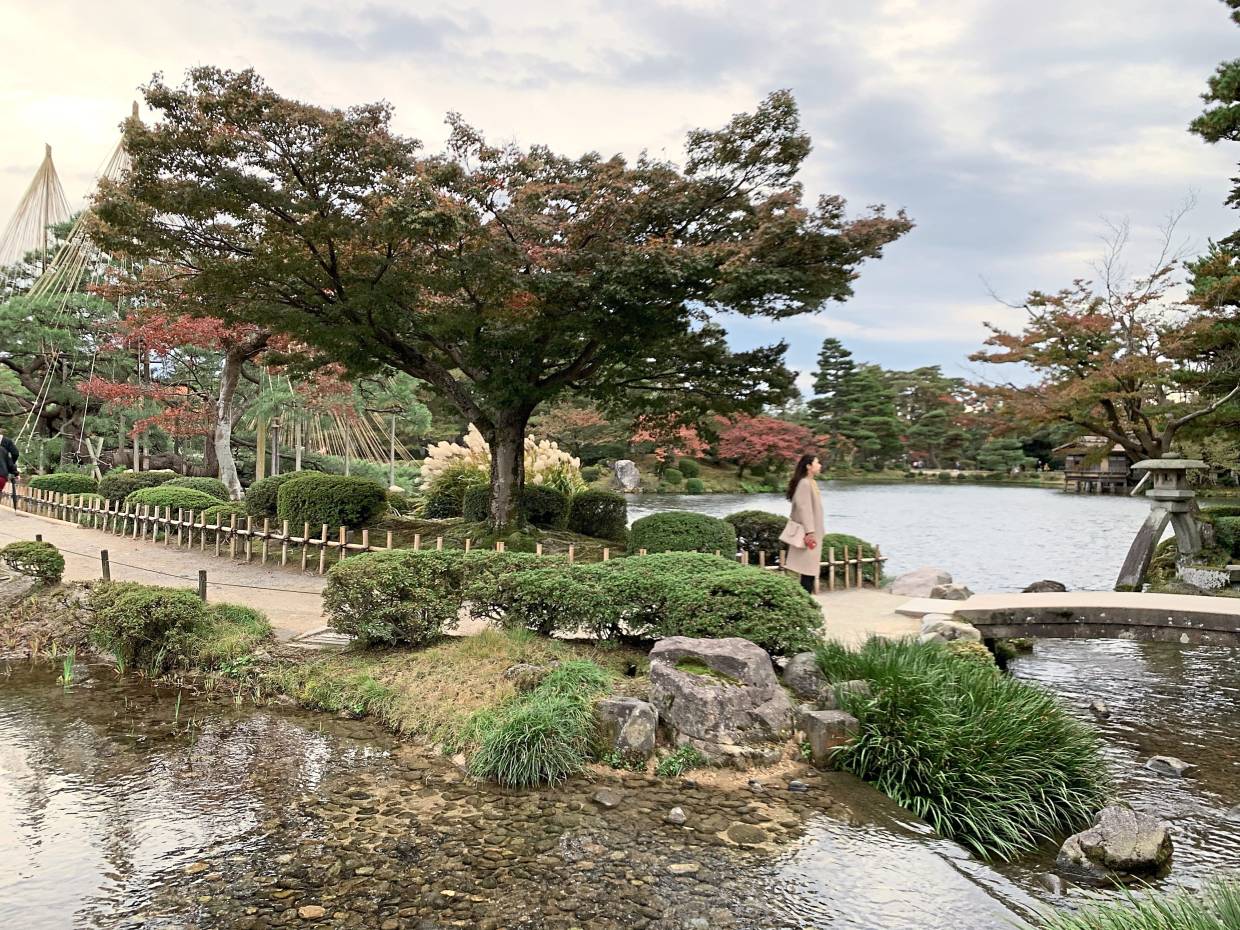 The Kenrokuen Garden could rival the Garden of Versailles in France with its winding streams, beautiful ponds, monuments and statues and historical tea houses. DINESH KUMAR MAGANATHAN/The Star

The Kenrokuen Garden was officially opened to the public in 1874 and is considered one of the three great gardens of Japan, together with Kairukuen Garden in Mito and Korakuen Garden in Okayama. It houses nearly 8,200 trees and over 160 species of plants.

If you go during autumn, expect to be dazzled with a wonderful display of colourful foliages.

Public bathhouses are everywhere in the onsen towns, but many hotels in Kaga City have their very own hot spring bathhouses. We stayed at the Kuriya Yasohachi hotel in Yamanaka Onsen town. The hotel’s hot spring bathhouse wasn’t as large as I had expected it to be but there was something earthy and rustic about it.

With some apprehension, I took off my robe, my eyes darting around to see whether anyone was looking (no one could be bothered, really) and stepped into arguably the best pool of water in my life.

I had never felt so relaxed before. The back pain left me. I would have stayed in the pool for hours if I could. But I am reminded that my internal organs would slowly be boiled to perfection if I did that, and I hesitantly left soon enough.

I went back to my hotel room, which was reminiscent of a very typical Japanese home with wooden sliding doors and tatami mats, feeling invigorated and ready to take on the day tomorrow.

Remember my travel curse? Well, it appeared that the curse was stronger than the magical healing waters of the onsen. For the rest of the week-long trip, pain was my unwanted companion. Perhaps I needed a few more onsen sessions...

If you prefer to spend your holidays in a calm and relaxing setting, a leisurely stroll along the streets of the Yamanaka Onsen town is a good option. 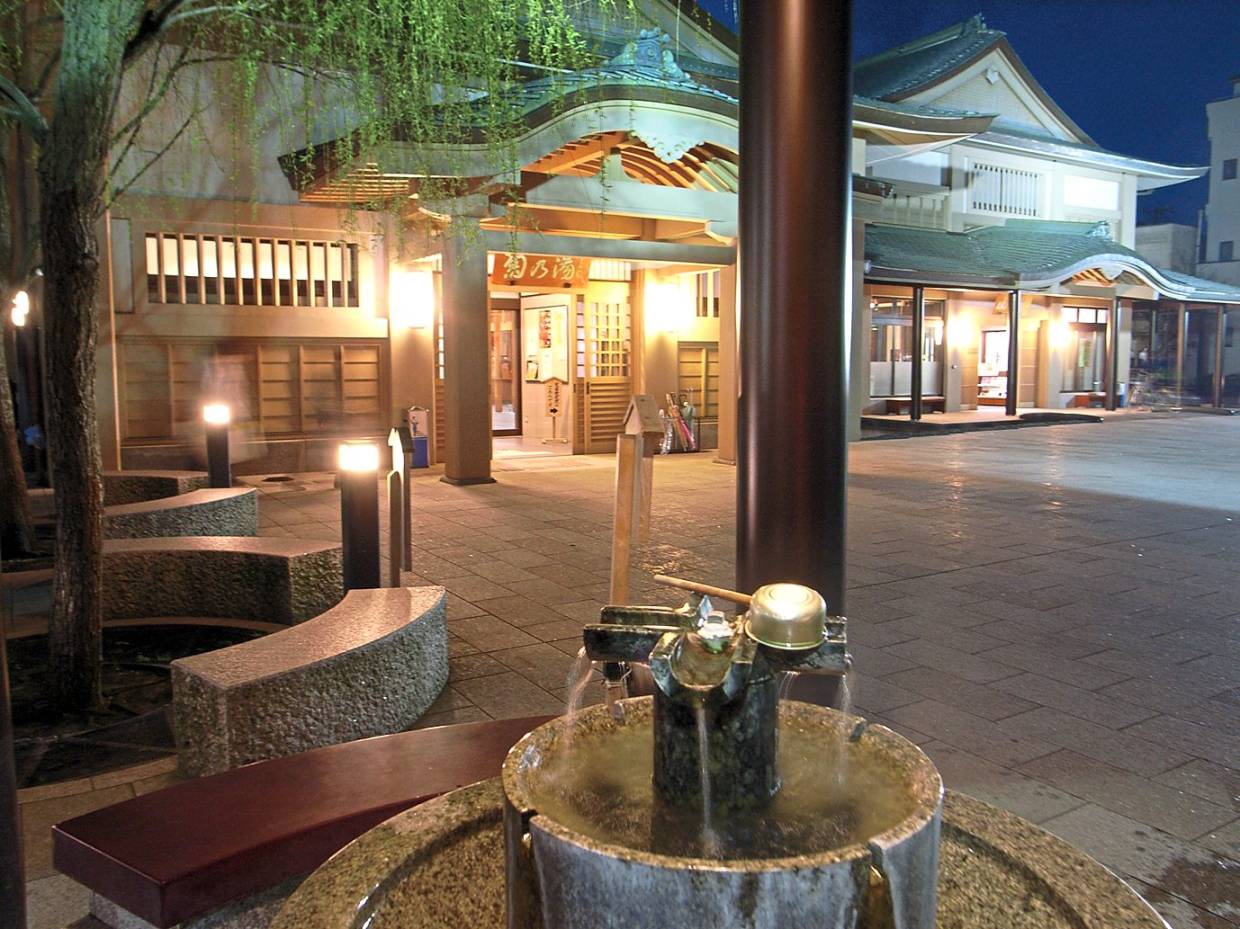 The Kiku-no-Yu public bath in Yamanaka Onsen town can be freely accessed by visitors who wish to soak their feet in refreshing hot spring water. — Kaga City Office

From local sweet shops to lacquerware stores and quaint Japanese restaurants, the town is a sleepy, picturesque place perfect for anyone who desires to “get lost” in the alleyways with the promise of discovering something new.

The crown jewel of this most beautiful of towns is undoubtedly the breathtaking Kakusenkei Gorge. With stunning rock formations along the Daishoji River, which runs through this scenic gorge, and the thick trees that line the riverside, this 1.3km trail is great for nature lovers.

If you come anytime between spring and autumn, there’s a platform right next to the river where you can enjoy the cool breeze as you take in the natural beauty around you.

Be sure to cross all three bridges (the Kurotani, Ayatori and Kohrogi) that cross the Daishoji River as they offer spectacular views of the gorge. Very Instagram-able.

Pro tip: Getting around Kaga City to its various sightseeing spots is made easy with a tour bus service called CANBUS that travels in a loop. With a one-day (RM37) or two-day (RM45) pass, users can get on and off the bus as many times as they like at their convenience, ensuring a smooth and hassle-free travel around the city. 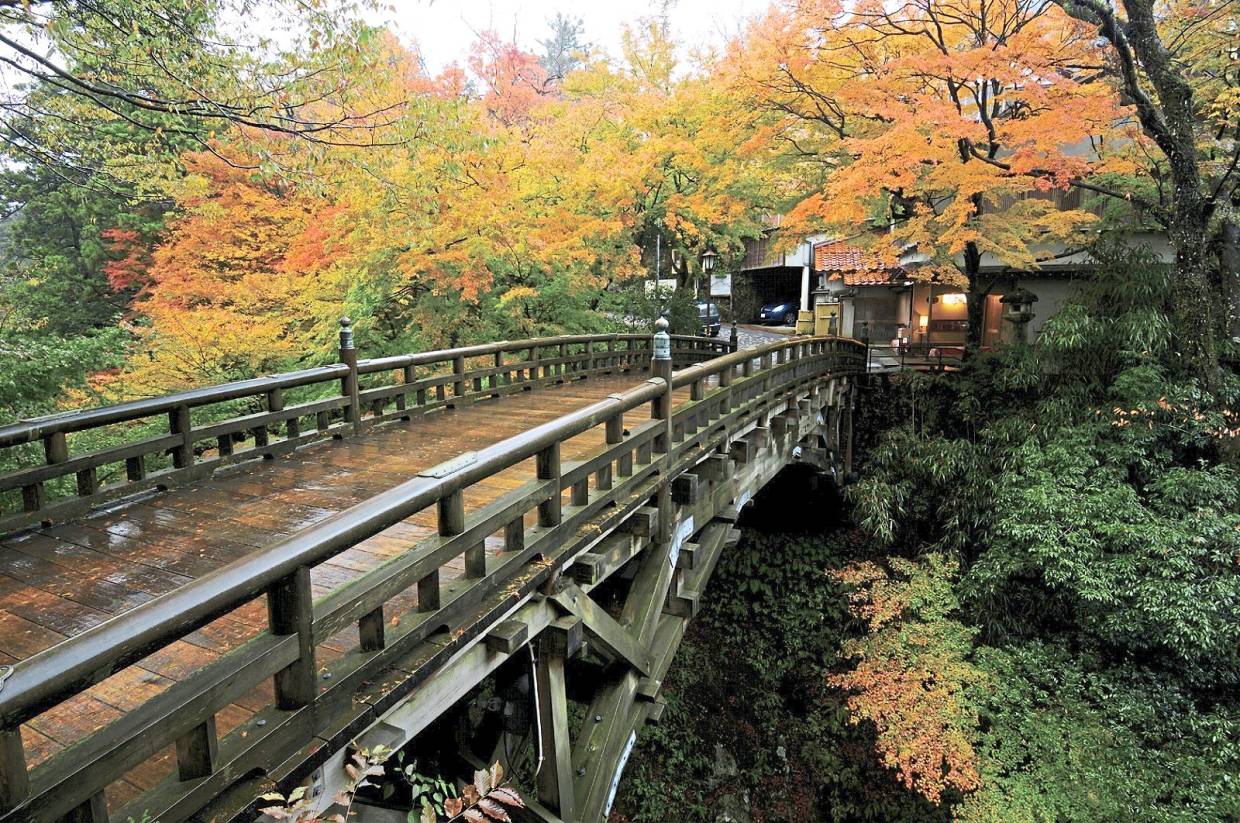 Be sure to cross the Korogi Bridge, one of the three bridges that cross the gorge, as it offers a breathtaking view of Kakusenkei. — Kaga City Office

Another onsen district that will undoubtedly charm you is the Yamashiro Onsen town, which is nearly 1,300 years old. The town was built around two large public bathhouses, the Soyu and the Ko-Soyu, common during the Edo period.

The rows of old Japanese inns with bright red latticework heighten the atmosphere of the town even more.

If you’re an art and history buff, be sure to visit Iroha-Soan, the old temporary abode of Kitaoji Rosanjin, one of Japan’s noted artists, calligrapher and epicure in the early part of the 20th century.

Rosanjin made Yamashiro Onsen his home for nearly half a year as he worked on carved calligraphy signboards and stayed at the old cottage that was built during the 1870s. You get to check out some of his works which are on display at the Iroha-Soan. Seeing Rosanjin’s study and the sunken hearth that kept him warm will give you a good sense of what inspired him.

It is believed that Rosanjin grew in fame after his short stint at the Yamashiro Onsen. Perhaps, that fate awaits you, too.

Meanwhile, the Yunokuni no Mori Traditional Handicrafts Village at Komatsu City might just be the place to unleash your inner Rosanjin. 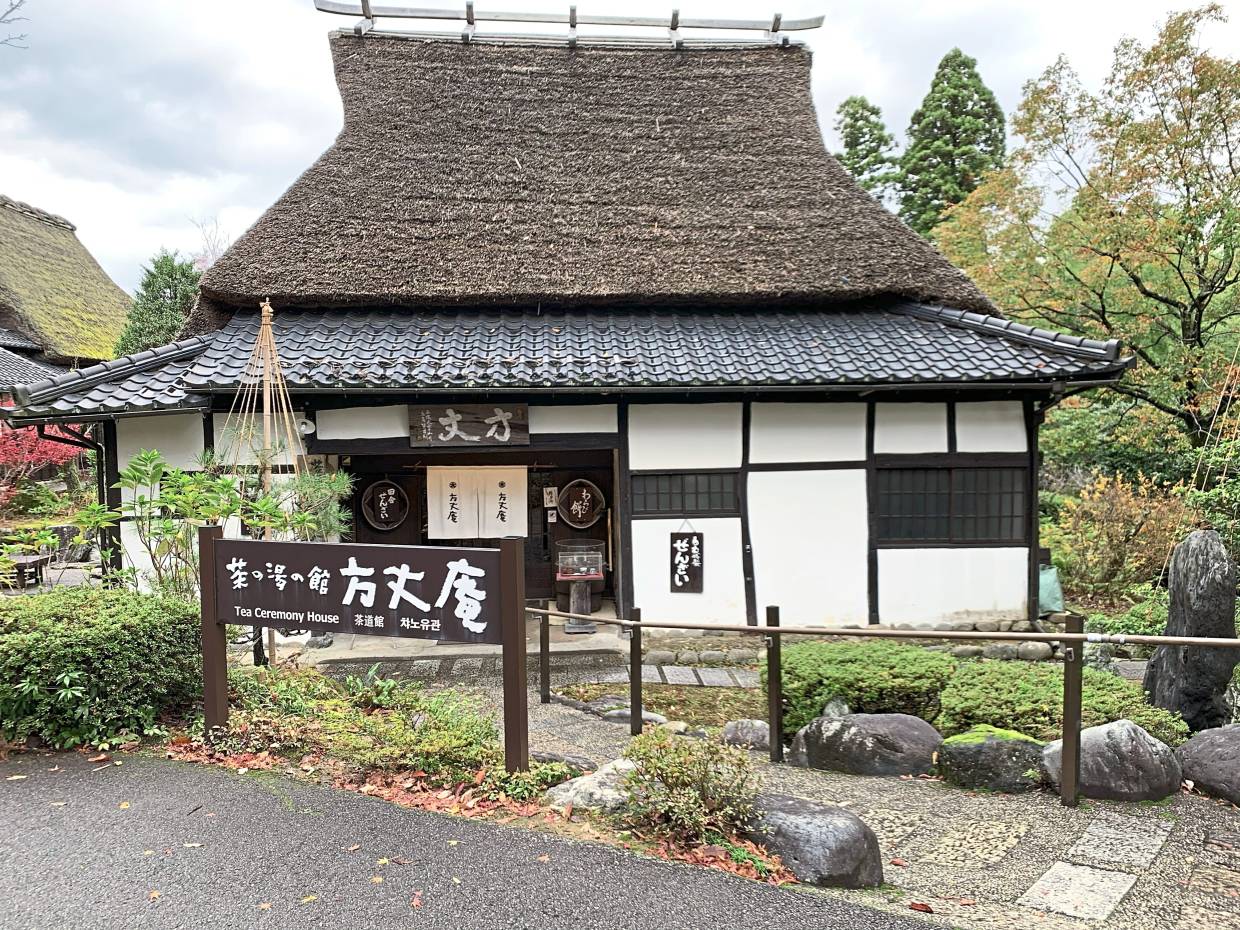 Open daily, this sprawling hamlet with nearly 20 relocated thatched houses reminiscent of a Japanese village from the yesteryears could be a scene plucked out of a Japanese haiku.

Try your hand at some of Kaga’s famous traditional crafts at this extensive park that was established nearly 30 years ago. There are over 50 activities to choose from, including stencil dyeing, Kutani pottery painting, sandblasting, decorating lacquerware with gold and traditional papermaking.

Not only that, you also get to observe Japanese artisans at work in some of the cottages which are dedicated to Wajima lacquerware, Kutani pottery and glasswork.

Heaven isn’t so far away

Once you’re done with walking around the onsen towns and trekking nature trails, head to the temples. Get spiritually refreshed and energised at some of the ancient temples that watch over Kaga City.

One worth checking out is the Natadera Temple, which was founded in 717 by a Buddhist monk. The large temple grounds features a pond garden, meditation caves, temple buildings and the scenic rock outcropping, a sight that will surely take you out of this world. 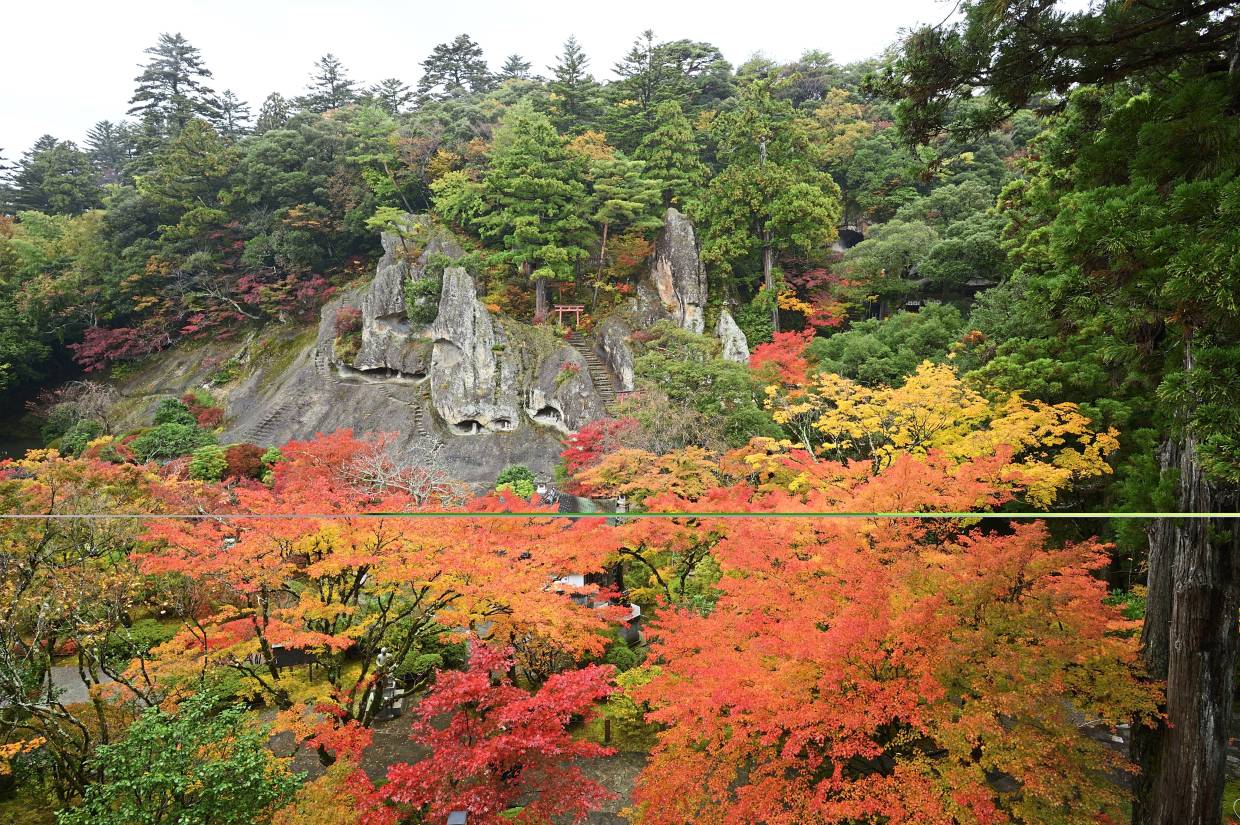 The Natadera Temple was built in 717 and the natural landscape offers a stunning view from the observation platform. — Kaga City Office

The almost cave-like recesses on the rock garden were carved naturally from volcanic eruptions and waves of a now-receded ocean hundreds of years ago.

One could almost see the ancient monks offering prayers and meditating in those outcrops.

To get the best view of this rock garden, get to the observation platform that overlooks the entire temple grounds, offering a breathtaking view of this natural haven.

For a brief moment, you will forget about the world outside and your soul will find a certain solace there.

Kaga City really does feel like the best spot for one to relax, unwind and be transported to a place lost in time with its stunning natural landscape, historic hot spring towns and countless cultural experiences a Japanese city could offer.

Gallery: Enjoy Japan’s old traditions and get in touch with the Japanese spirit at Kaga City 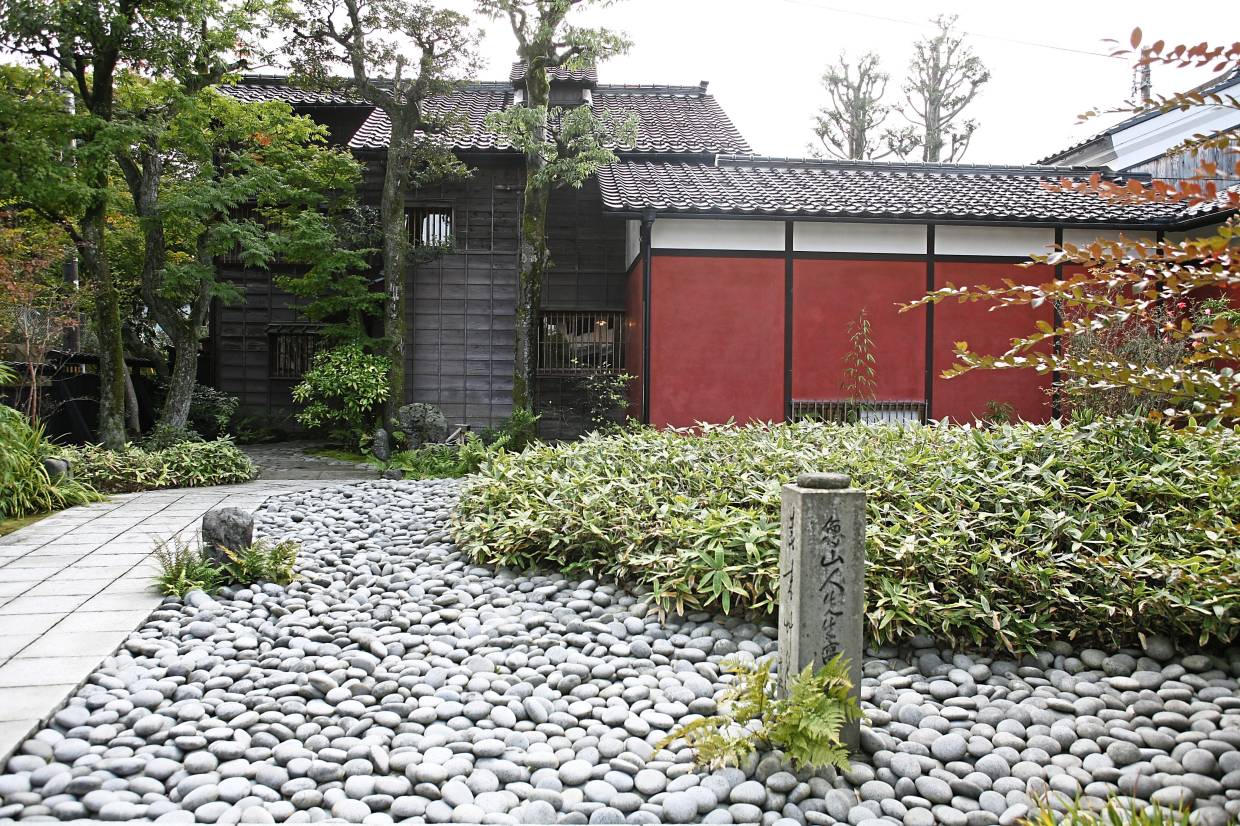 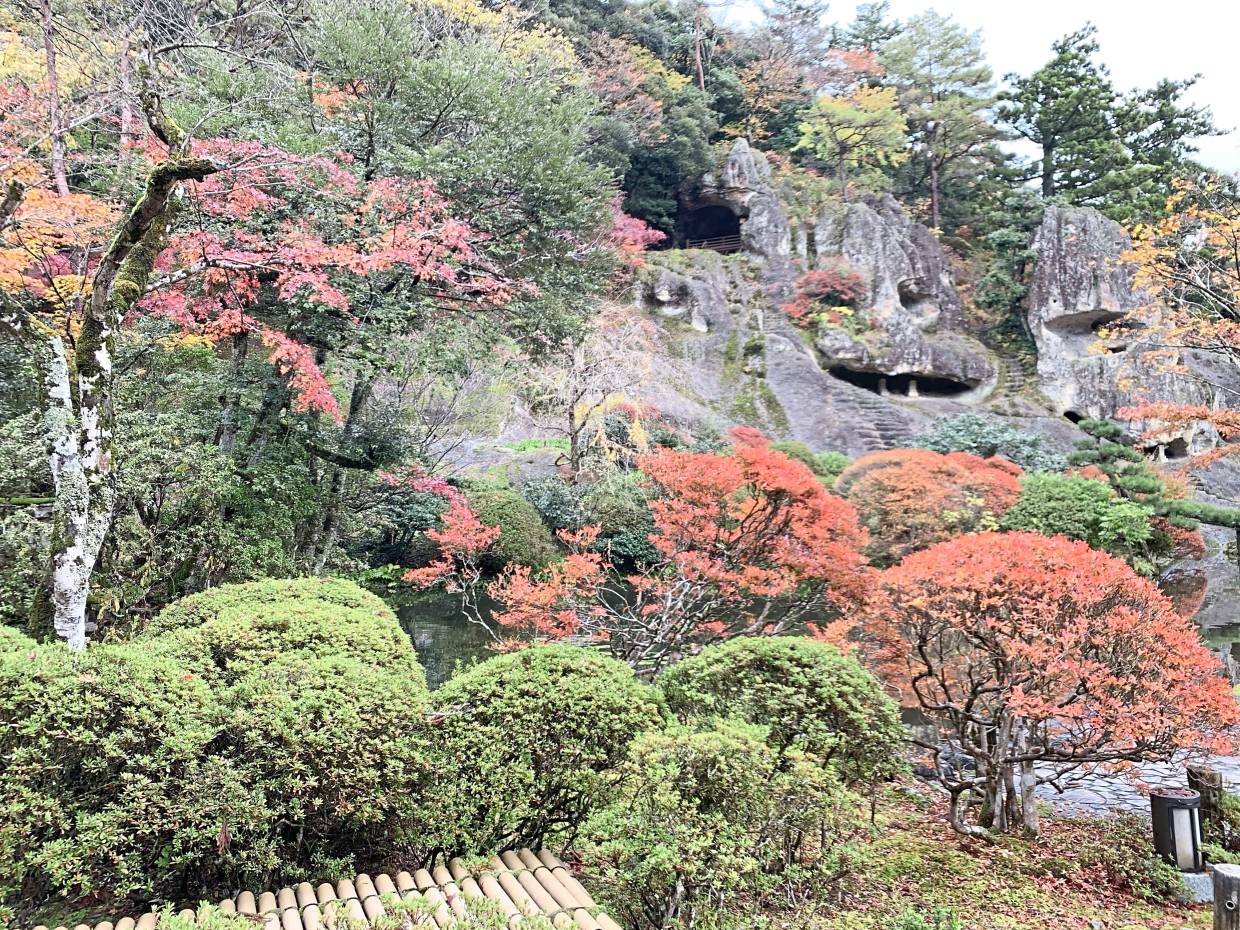 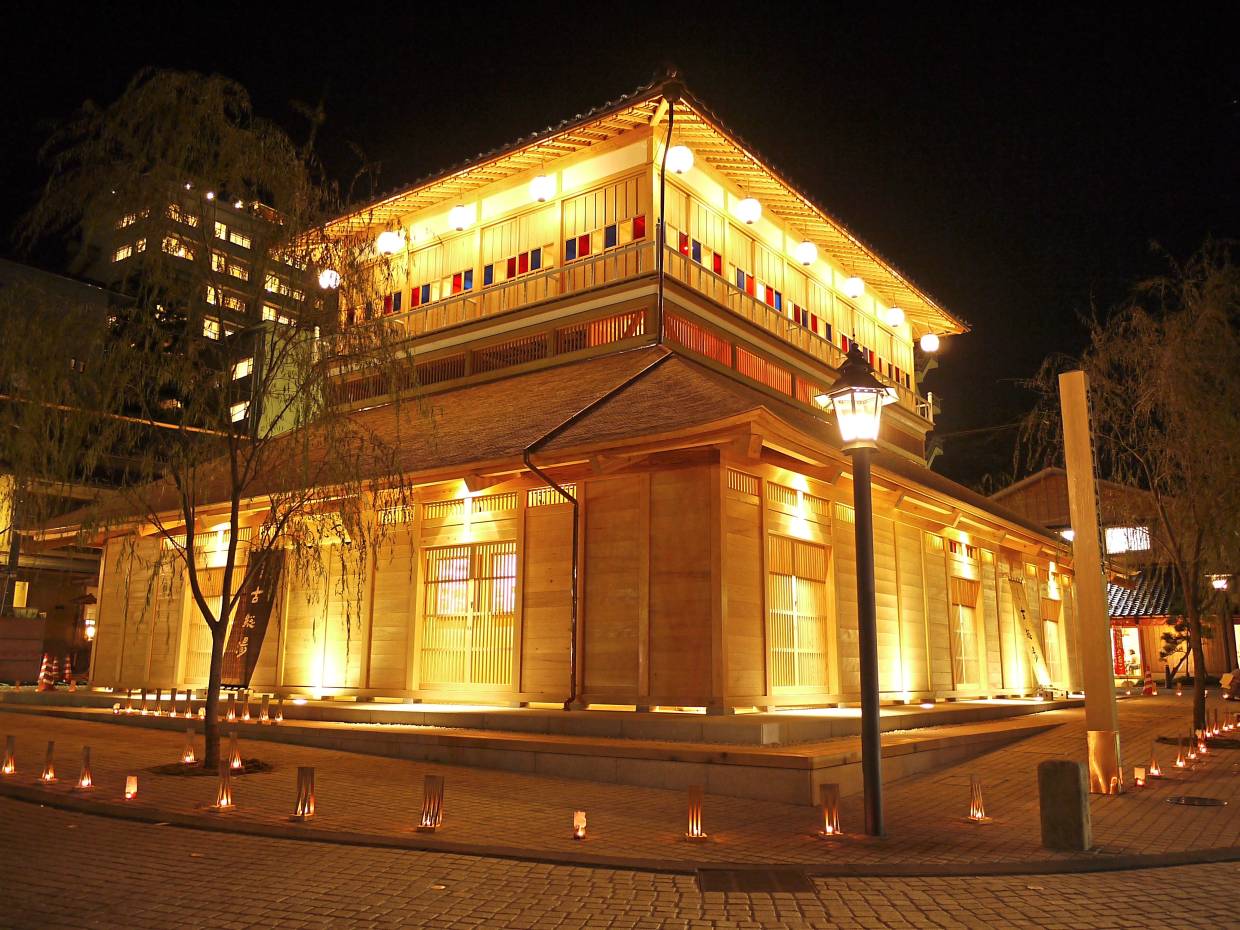 The mighty Daishoji River runs across the Kakusenkei Gorge, which is just a short walk from the Yamanaka Onsen. Photo: Kaga City Office

The Kiku-no-Yu public bath in Yamanaka Onsen town can be freely accessed by visitors who wish to soak their feet in refreshing hot spring water. — Kaga City Office

Be sure to cross the Korogi Bridge, one of the three bridges that cross the gorge, as it offers a breathtaking view of Kakusenkei. — Kaga City Office

The nearly 300-year-old Omicho Market in Kanazawa is rightly called the local kitchen, with its abundance of fresh produce and seafood.

The Natadera Temple was built in 717 and the natural landscape offers a stunning view from the observation platform. — Kaga City Office

The rock outcropping at Natadera Temple were naturally carved by volcanic eruptions and waves of the oceans hundreds of years ago, creating cave-like recesses.

The Kosoyu in Yamashiro Onsen retains much of the old-fashioned atmosphere, giving visitors a taste of the town’s history and culture. — Kaga City Office