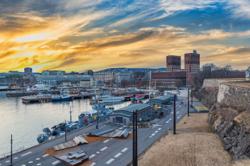 A person walks past the window display of a Guess store which includes the artwork "Flower Thrower" by artist Banksy on Regent Street in London. Photo: Reuters

Banksy has accused fashion brand Guess of using his work on a clothing collection without permission. The elusive artist posted an image of items on display in the window of Guess’s store on Regent Street in London.

He wrote: "Attention all shoplifters. Please go to Guess on Regent Street. They’ve helped themselves to my artwork without asking, how can it be wrong for you to do the same to their clothes?”

His image showed what appeared to be a copy of Banksy’s "Flower Thrower", with five mannequins wearing outfits from the collection.

The words "Guess x Brandalised with graffiti by Banksy” had been applied to the shop window.

Guess previously announced what it described as a "brand new capsule collection inspired by Banksy’s graffiti”, featuring clothing for men, women and children as well as accessories.

In the press release announcing the collection in Belgium, Guess said items used "iconic motifs from Banksy’s graffiti”, describing it as a "fashion-forward range of must-have pieces”.

It featured a quote by Paul Marciano, chief creative officer of Guess, saying: "The graffiti of Banksy has had a phenomenal influence that resonates throughout popular culture.

"This new capsule collection with Brandalised is a way for fashion to show its gratitude.”

The press release said the pieces were in partnership with Brandalised, which it described as "an urban graffiti licence whose mission is to offer Banksy fans affordable graffiti collectibles”.

Last week, Banksy confirmed he had created a series of artworks in Ukraine after a several murals appeared in the country. One piece, in the town of Borodyanka, near Kyiv, depicted a man resembling Russian President Vladimir Putin being flipped during a judo match with a little boy.

Another showed two children using a metal tank trap as a seesaw, while a female gymnast was shown balancing on a damaged building.

Borodyanka, located north-west of the capital, was one of the towns hardest hit by Russia’s bombardment at the beginning of the invasion.

Russian soldiers invaded in February of this year, occupying the town for weeks before it was liberated in April. Since then, the town has been the focus of reconstruction efforts, with several tower blocks demolished as a result of damage caused by the fighting. – dpa

A look inside the fast-paced, ultra-cheap throwaway fashion industry of China