Hermes is renowned in the industry for its careful management of production and stocks, which have helped maintain its aura of exclusivity. Photo: Instagram/Hermes

Birkin bag maker Hermes is not interested in getting involved in the fast-growing second-hand luxury market which has attracted some its rivals, its chief Axel Dumas said last week (July 29).

Unlike Kering, which has invested in reseller Vestiaire Collective and sells some of its labels on platforms for pre-owned wares, Hermes sees the second-hand market as a threat, saying it drives up prices and can fuel counterfeiting.

"It would be to the detriment of our regular client who comes to the store," Dumas told analysts following strong first-half results when asked if he had engaged with any re-seller.

Read more: How Longchamp is looking at the sustainability aspect of its artisanal creations

Luxury brands have traditionally been wary of second-hand dealers, but rising interest in pre-owned fashion from younger, environmentally-conscious shoppers has prompted some labels to reconsider their position.

Hermes is renowned in the industry for its careful management of production and stocks, which have helped maintain its aura of exclusivity. It has output caps so that demand for its high-end handbags always exceeds supply.

Its coveted US$10,000 (RM44,523) plus Birkin model generates waiting lists and can sometimes cost more on the resale market than in Hermes stores. The group does not sell its prized handbags online.

"Demand has always been higher than our offer, we've been confronted with this for years," Dumas said, adding the group would not produce more if it meant compromising on quality.

The company has limited growth in its leather goods production 6% to 7% annually. It is currently building five new leather workshops in France due to come into use over the next five years.

"We produce with one thing in mind, quality, if we don't manage to have this in terms of know-how or beauty of materials, I prefer not to produce," even if this leads to bottlenecks, he said, adding that it takes 15 hours of labour to make a Birkin bag.

Larger rival LVMH has also said it does not intend to participate in the second-hand market and has emphasised efforts to offer repair services for its products instead. – Reuters 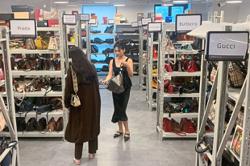 Tudor welcomes watch lovers to a storied exhibition held in the heart of KL
Victoria Beckham debuts at Paris Fashion Week, but will this help her brand?
Perfume in the metaverse? Beauty brands are now getting in the game
Bella Hadid’s spray-on dress: How does it work, and everything you need to know about it
What is 'kidcore', the style trend that's taking Gen-Zs back to childhood?
Cher, 76, stuns guests at Balmain runway show with catwalk in a spandex bodysuit
Style Watch: Malaysian model Sofia Goh is all about the classic chic look
Top beauty-related mistakes you're making, and how to fix them
Designer Daniel Lee replaces Riccardo Tisci at Burberry
Why you should include castor oil as part of your beauty arsenal