Why Park Seo-joon has become the fashion industry's latest obsession Park Seo-joon’s impeccable style is all about combining the best of two aesthetics. Photo: Skechers

Hallyu stars create the biggest buzz when it is something to do with fashion. These well-dressed celebrities can cause their fans to go wild with a simple OOTD (outfit of the day) posting.

The South Korean actor, who is known for starring in numerous television series, is seen actively sharing his fashion looks there – and they range from well-tailored getups to more casual, yet cool ensembles.

He says that it is a matter of convenience for him. His ability to move from one look to another is all about what is best to get him through the day.

“When I have a schedule, I usually wear suits, but since it’s a tight fit, there are some inconveniences in activities,” Park points out, in an email interview.

“That’s why I usually wear comfortable casual clothes. I also think that the natural style can present the true me.”

Read more: Want to dress like BTS? K-pop group's outfits for Grammys to be auctioned off

The 32-year-old was recently named Skecher’s regional brand ambassador for Malaysia, Singapore, Hong Kong, Macau, Thailand and Vietnam. He will front campaigns for the footwear brand.

Seen frequently wearing sneakers in his Instagram snaps, he says it is something that can complement his chameleon-like aesthetic.

“It goes well with training clothes, but I think it will go well with all styles in daily life, either suits or casuals,” Park notes, regarding rocking a nice pair of sneakers in his upcoming television commercial.

Frequently seen on television, Park has made quite a name for himself. He starred in Kill Me, Heal Me, She Was Pretty, Hwarang: The Poet Warrior Youth, Fight For My Way, What’s Wrong With Secretary Kim and Itaewon Class.

That said, he actually made his debut back in 2011 by appearing in singer-songwriter Bang Yong Guk’s music video I Remember. He has also made inroads in films.

Park is currently filming Concrete Utopia, a thriller about the aftermath of a devastating earthquake that ravaged Seoul.

That is in addition to having wrapped up the filming of The Marvels, the upcoming sequel to Captain Marvel.

He is currently on the cover of South Korea’s Marie Claire. In the photo shoot, he managed to pull off both classy and casual looks – which totally underscores his sophisticated and trendy side.

Park told the magazine that he tries to challenge himself with new things and takes pride in having positive influence on someone.

Despite his busy schedule, he still thinks a lot about his loyal fans. To him, it is about presenting himself the best way he can, especially for those who try to emulate his style.

“I think this opportunity has brought me a little closer to overseas fans. I am so grateful to all the interest and support from people,” he says about his recent appointment by Skechers.

“I hope Covid-19 will end soon and there will be an opportunity to meet overseas fans in person. Even if we can’t meet in person, I hope I can show various sides of myself through different contents.”

Want to dress like BTS? K-pop group's outfits for Grammys to be auctioned off

Walk in their shoes? Joe Flizzow and SonaOne turn to designing sneakers

Who is Lena Situations and how is she conquering the global fashion world? 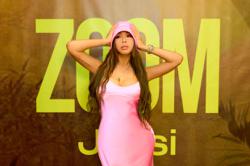 The superwomen of Malaysian fashion and the influence they had on the scene Premium
Burkina Faso designers show there's more to nation than conflict at fashion week
'Jello skin', a new holistic K-beauty trend, is going viral on TikTok
Fashion players will double their investments in tech by 2030, says a new report
How the corset stole the show at this year's Met Gala
Giving yourself a 'sunburnt' look is the latest crazy TikTok beauty trend
As seen at the Met Gala, luxury watches can make a statement on the red carpet
As the hijabi market grows, designers turn their attention to modest activewear Premium
Social media users are craving 'vanilla almond butter'... as a hair shade
Guys, are you ready to travel again? Fashion has got you covered