Models appear at a balconiy of Jean Paul Gaultier's fashion house after the presentation of the Autumn/Winter 2021 collection with Sacai. Photo: AP

The couture season returned last week, bringing with it the usual grandeur of runway shows. There were still some designers who opted for digital presentations, but the number of in-person events increased.

It was reported that France saw more physical shows during the initially planned four-day Paris Couture Week than it had in the last 18 months. A cause for celebration indeed, as the industry declares an impending return to normalcy in the country. 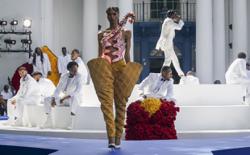 Alexander McQueen's designs on display at Salem witch trial exhibition
The watchmaking world looks beyond time to capture a new generation of consumers Premium
'The ambassador for the non-conformists': Amy Winehouse, as seen by her stylist
Decoding the enduring style of James Bond, the world's favourite secret agent
The faux fur coat could be the star piece of this season's fashion
If you must know, 'green' stockings are fashion's new cool and sexy
Indian actress Deepika Padukone launches her own line of beauty products
Bright colours and bold choices reign on the Emmys red carpet
Style Watch: Malaysian artiste Foo Bihzhu is fashionably larger than life
In bid for sustainability, clothes are being fashioned from recycled car airbags