Angela Bassett arrives on the red carpet at the Oscars. Photo: AP

Red carpet glam was back Sunday (April 25) at the Oscars with Andra Day and Carey Mulligan shimmering in award-worthy gold and Maria Bakalova among several stars in bright white princess gowns during the pandemic era's first big parade of fashion.

There was a strong showing of reds as well, along with belly-baring midriffs, the latter including Zendaya in standout yellow and more than 183 carats of Bulgari diamonds from ears and neck to her fingers.

Day dressed all the way up in a sexy look cut to the thigh on one side with a cutout at the waist. It was custom Vera Wang made of actual metal, paired with a dainty pair of drop earrings tipped with yellow diamonds from Tiffany & Co.

Mulligan stunned in gold Valentino couture, a midriff look with a tiny metallic top and a huge ball skirt.

With nominees scattered around the world, the red carpet was far less hectic.

"Calm. If people were here they would know how absolutely groundbreaking calm is, ” said Viola Davis, dressed in a stunning white custom look with intricate cutouts in a snug bodice that fell to a princess skirt.

Read more: Upcoming Oscars to offer 'a little bit of sparkle' on the red carpet

Bakalova, the breakout star of Borat: Subsequent Movie Film, also brought princess, also in white, with a bit of subdued sparkle and a plunging neckline that fell to a tulle skirt, thanks to Louis Vuitton. She snagged a pair of stunning chandelier diamond earrings for the evening.

Regina King, who opened the show, went for robin's egg blue Louis Vuitton with winged shoulders and silver stripe embellishments. Riz Ahmed, Leslie Odom Jr. and Daniel Kaluuya, in a Bottega Venetta tux, were among many of the guys who went without ties.

Reese Witherspoon got the red memo, in Dior, along with Angela Bassett in a red look with statement short poofy sleeves and Chopard rubies and diamonds. Bassett's train gown was by Alberta Ferretti. 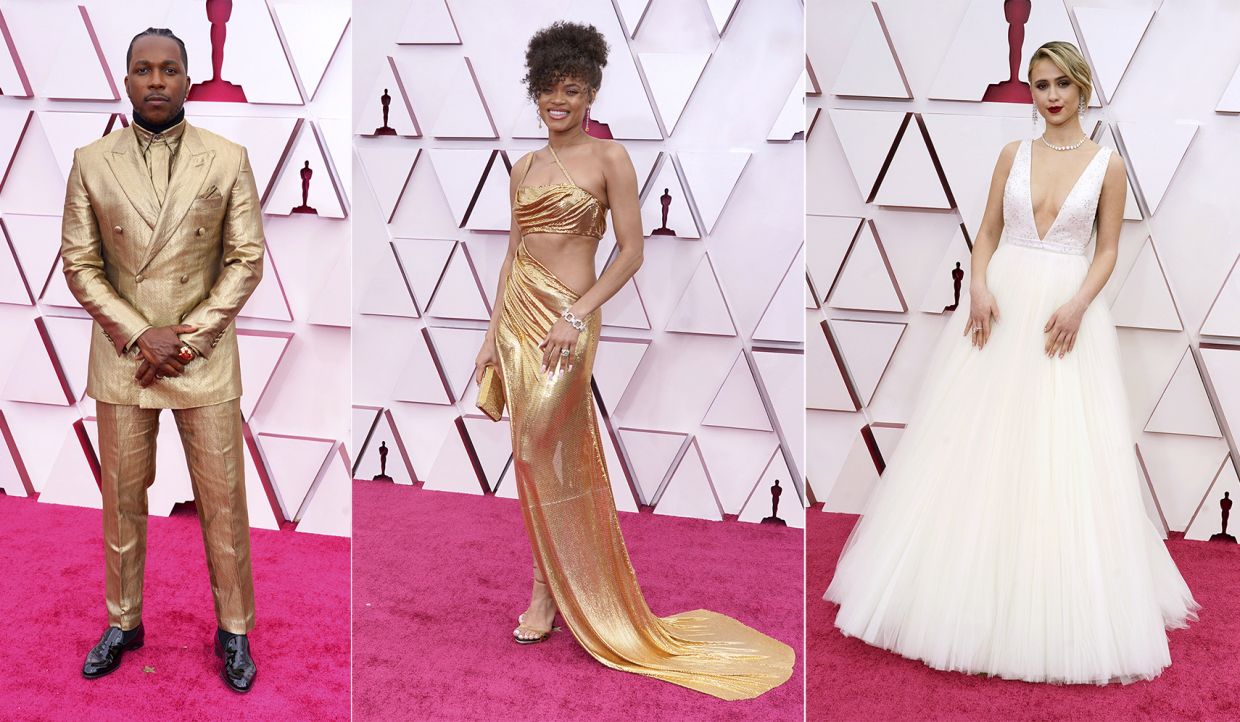 Oscar performer H.E.R. made a red carpet appearance in cobalt blue custom Dundas. It included a hooded cape and a flared jumpsuit.

Diane Warren and Odom kicked off the carpet in Los Angeles in the two trend colours: white and gold, Warren in a Valentino tuxedo white with a sequin turtleneck and Odom in a glistening gold double-breasted tux – gold shirt included – from Brioni.

"I've never been dressed by a designer before," Warren told E!. "How cool is that?”

"I am a lucky, lucky man, ” he said, while Robinson was grateful for no baby spit up. Amanda Seyfried chose vibrant red from Armani Prive, her hair in an Old Hollywood side-swept updo. It was among a slew of classic princess cuts, hers a strapless look with a plunging neckline. Halle Berry was a loner in mauve, unfurling her light-as-air train on the carpet with her hair in a short crop. New mom Emerald Fennell, best director nominee for Promising Young Woman, smiled bright in a flowing spring green and pink gown.

Lately, she's been making up personas to match her outfits. She topped off the look with sparkly lilac eye shadow.

"So tonight I am Susan your pottery teacher who has a business opportunity for you which is absolutely not a pyramid scheme, ” she said.

The 9-year-old star of Minari, Alan Kim, vamped on the carpet in his black shorts suit with high black socks, including one with horizontal white stripes. He just had a birthday and got the bike he was hoping for.

Glenn Close, nominated for Hillbilly Elegy, paired a jewel-tone blue embellished caftan from Armani Prive with dark slacks and gloves. And she, like so many others on hand, was back in heels.

"I'm feeling great. My shoes are comfortable. It's not two miles long so that's lovely, ” she said.

Other stars chose elegant black for the pandemic-era Oscars. Some were in bright oranges and pinks. Nominee LaKeith Stanfield chose a custom black jumpsuit with a belt and wide-lapeled button-down underneath by Saint Laurent. – AP