Their influence around the world is rather phenomenal. The seven-member K-pop boyband BTS performed at the Grammy Awards earlier this year, after receiving a nomination for "Best Pop Duo/Group Performance".

While Jin, Suga, J-Hope, RM, Jimin, V and Jungkook ended up not winning, they still caused quite the buzz – both for their energetic stage performance of Billboard Hot 100 topper Dynamite and red carpet appearance wearing Louis Vuitton suits.

Now, the fashion house has announced that BTS will be its new ambassadors. The press release names them as "one of the most renowned and influential groups in the world”.

"I am delighted BTS are joining Louis Vuitton today. I am looking forward to this wonderful partnership, which adds a modern chapter to the house, merging luxury and contemporary culture," reads the statement by Virgil Abloh, artistic director of Louis Vuitton menswear.

Breaking the news on Twitter, the fashion house said that BTS are pop icons recognised for their "uplifting messages that impart a positive influence".

Abloh has been said to have spent time with the group to go over creative visions and ideas for the brand. It has however, not been revealed what lies in store in the upcoming plans.

For BTS, this is a big achievement indeed. It solidifies their hold on pop culture, especially in the realms of fashion – where the industry is clamouring to remain relevant among the younger generation.

Over the past few years, global fashion houses have been courting K-pop stars by means of invites to runway shows and dressing them for red carpet events. To designers, the K-wave is not something to be dismissive about.

Read more: Fashion in pictures: With 'Dynamite', BTS shows that they are truly in style

BTS' reach in terms of fashion is huge, especially among fans. Their music videos have consistently been dissected and scrutinised, where the way they dress up is copied. They have worked with fashion brands before, but Louis Vuitton's appointment is their biggest so far.

“Becoming global brand ambassadors for Louis Vuitton is a truly exciting moment for us, ” the statement from BTS notes. 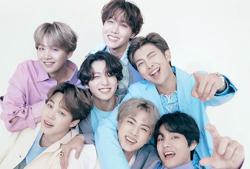