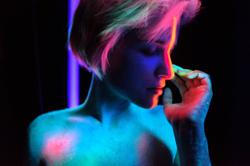 Claudia Schiffer (pictured here), and others like Cindy Crawford and Naomi Campbell, paved the way for the younger generations of top models. Photo: File pic

Can Bella Hadid, Kendall Jenner, Taylor Hill and others be replaced by avatars? If virtual models existed in the past, would Claudia Schiffer be as successful?

This are the questions everyone should be asking after 2020, a year where in the end, models were largely absent.

The cancellation of physical fashion shows and the near-impossibility of campaign shoots suggest that the digital revolution initiated by the fashion industry may spell the end for human top models, who have been reigning in the fashion world for three decades.

It was in the 1990s that the heyday of supermodels really began, to the point where they became the muses of many designers, and generated frenzied attention during some fashion shows.

Schiffer, and others like Cindy Crawford and Naomi Campbell, paved the way for the younger generations of top models, who became true fashion icons and, since the advent of social networks, Influencers with a capital followed by tens of millions of subscribers.

An undeniable force that ready-to-wear and luxury brands were eager to harness. And this was more or less how things were operating until 2020, a year that has totally shaken up the fashion world.

The global pandemic and social distancing measures have put a halt to fashion shows and disrupted the entire creative process of designers and photographers.

While a handful of campaigns were carried out with various online video technologies, it is clear that the presence of models has never been more scarce than this year.

This state of affairs, however, did not prevent them from gaining subscribers on social networks, with Kendall Jenner adding 26 million and Gigi Hadid 11 million.

One thing is for sure, the acceleration of digital in the fashion industry could totally change the modeling landscape, and even create a new genre of supermodels: virtual models.

Avatars on the runway

What would you say if an avatar straight out of your favourite designer's imagination introduced you to their new collection? In fact, it's not that new a phenomenon with some people already testing the experience over a few years now.

In 2011, almost a decade ago, the Forever 21 brand experimented with hologram models, while seven years later the first digital supermodel, Shudu Gram, appeared.

Today Shudu Gram has over 210,000 followers on Instagram. Not bad for a model who doesn't exist.

In 2018, Olivier Rousteing also made headlines by unveiling a daring campaign led by a virtual Balmain Army composed of Margot, Zhi, and... Shudu.

A true feat at the time, which could soon become the norm, if only to allow fashion houses to continue to present their new collections in the event of lockdowns.

Read more: Strike a pose! These models aren't real, but their success sure is lifelike

With the health crisis, the year 2020 also saw major luxury houses, as well as ready-to-wear brands, create a slew of projects with social networks like Snapchat or video games like Animal Crossing.

Such moves represented an opportunity to showcase the emblematic pieces in their new collections, but also to reach a target that has become an essential part of their strategy: generation Z.

Last weekend, Balenciaga generated buzz by unveiling its latest collection in a video game. Demna Gvasalia, artistic director of the house, propelled his virtual guests into 2031 into a plot guided by models composed of computer-generated images.

What do we predict? It may well be that virtual models won't have to wait another decade before making their mark on the fashion world.

And while it is probably still too early to imagine them on a runway at Paris Fashion Week, there is no doubt that they could quickly become a go-to for the digital platforms of the biggest luxury houses. – AFP Relaxnews

Feeling guilty about loving fashion? Don't, you can look good and still do good

Malaysian graffiti artist puts his own stamp on time with exclusive watch design
As big names pull out of Paris Fashion Week, student designers fill the void
Meet the designers who brought colourful diversity to Milan's fashion runways
Wearing a corset in an era marked by body positivity and self-love
Fashion and glam return to the Golden Globes, but at a distance
Supermodel Joan Smalls is on a mission to make fashion more inclusive
Delving into the afro-futuristic fashion of comedy film 'Coming 2 America'
Virtual makeup testers now the next big trend in online cosmetics shopping
How fashion at work is now different: 'I saw someone wearing just their socks'
Supermodel Natalia Vodianova named as the UN's latest goodwill ambassador