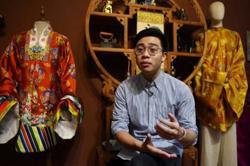 Made from delicate silk, intricately embroidered and with vast, flared sleeves: Vietnamese 19th-century outfits do not seem a perfect fit for life in the country's hectic modern cities.

But Nguyen Duc Loc, a 28-year-old entrepreneur, together with his 11-strong production team in Hanoi, is convinced the attire of their ancestors can make a return to modern-day living.

"My ambition is that in any Vietnamese wardrobe, as well as suits, trousers, dresses, there will be at least one outfit based on an ancient style to wear on important occasions," like festivals and weddings, he said.

Based on his own research, Loc and his company Y Van Hien reproduce outfits largely from the Nguyen dynasty that spanned close to a century and a half from 1802 – a time when the ruling class wore extravagant, brightly coloured designs embellished with symbols of power, such as dragons.

He wants everyone, both men and women, to appreciate the "astonishing beauty" of ancient imperial-style dress, he says, and understand the part this clothing plays in Vietnam's cultural history.

In one of their first major commissions, Y Van Hien was asked to produce costumes for Phuong Khau, an 18-episode YouTube drama about the emperor and empress of the Nguyen Dynasty.

The company – which was set up in 2018 – has also designed costumes for singers, music videos and fashion shows. 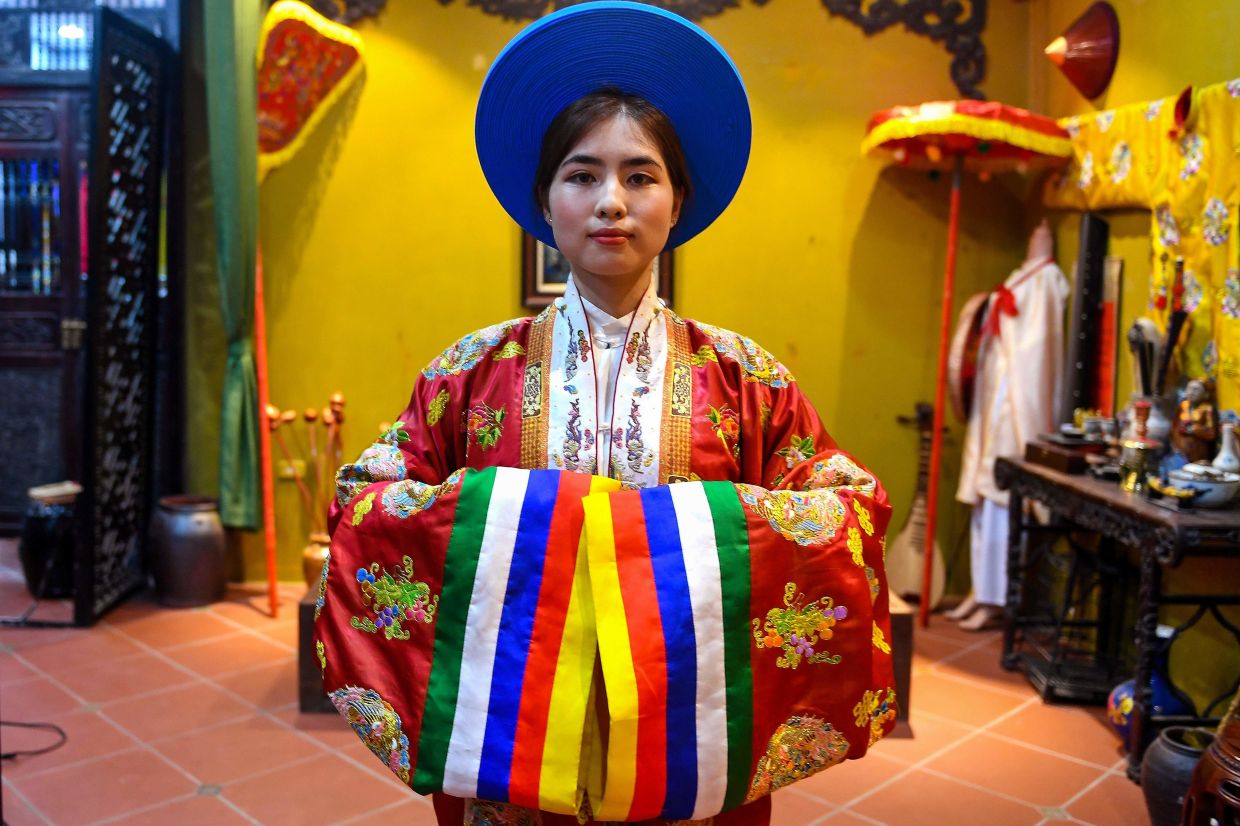 This picture shows student Pham Trang Nhung posing in an outfit based on traditional patterns and styles at the Y Van Hien company studio. Photo: AFP

Despite some criticism that the designs have strayed too far from the originals, they are also seeing a growing interest among young people. Many choose to rent an outfit for a photoshoot, with prices starting at US$17 (RM69).

"I think ancient-style costumes... are part of Vietnamese culture that we need to preserve," said Pham Trang Nhung, a 22-year-old student who had come to see Loc's designs.

Blossoming curiosity over outfits worn by generations past comes as officials from the sports and culture department in the central province of Thua Thien-Hue began wearing the traditional "ao dai" – a long tunic worn over trousers – one day a month as a way to promote and preserve cultural values.

Although a far more comfortable and modern prospect than royal 19th-century clothing, some say they are too restrictive and impractical in today's world.

Nevertheless, a simplified version of a woman's ao dai still forms part of some school uniforms in the south and central regions, is worn by flight attendants on flag carrier Vietnam Airlines and is embraced by many on special occasions.

Social media shows plenty of pictures of young women posing in traditional dress – and with more than a dozen Facebook groups catering to those interested in ancient designs, some aficionados have even banded together to create a rival design company to Loc's.

Nguyen Duc Binh, an editor of an arts magazine and an expert on traditional culture, said the attraction among the young stems from a desire to assert themselves, and their pride in their country, in a similar way to the youth of other Asian nations.

"In some more developed countries such as Japan and South Korea, traditional costumes can be seen as icons for the young people to look at," he said.

Young Vietnamese "admire those countries' development" and "they have tried to find some traditional things" from their own country's past to celebrate. – AFP

If a scar feels like a blemish, here are a few beauty fixes to read up on
Angel Chen, China's rising fashion designer, snags another big collaboration
Expert tips to consider in the battle against irritated skin from face masks
With 'Bridgerton' surging in popularity, corsets are now back in fashion
5 Malaysian beauty queens prove style is more than just the way you dress up
Meet the next big fashion icon... Bernie Sanders?
Why 2021 could be the year ear makeup (finally) goes mainstream
Fashion now gender-neutral? 'Pearl necklace for men' a popular Google search
Inauguration fashion trends: Purple, pearls and American designers
Baggy jeans to oversized jewellery, 90s fashion is making a comeback in 2021