The designs make use of demure colours like white, black and blue to bring out that classic feel. Photo: House Of Toi.

With Covid-19 upending the fashion industry around the world, Malaysian couturier Datuk Zang Toi is creating classic clothes in timeless colours to weather the storm. His Spring 2021 collection returns to a more pared-down aesthetic.

This is in line with reports that consumers are now less interested in buying outwardly trendy garments. More people are instead looking for pieces that can stand the test of time, not just a fashion season or two.

“Timelessness is like comfort food that most everyone craves during this challenging time, ” says Kelantan-born Toi, 59, who is currently in New York, where his atelier is based.

Toi was inspired by the late American socialite and fashion icon Millicent Rogers in coming up with his collection this time around. The designs make use of demure colours like white, black and blue to bring out that classic feel.

Rogers is known for wearing flawless couture outfits. Toi thus drew from her passion for well-tailored, beautiful clothes to come up with his creations.

“She was among the firsts to champion the inclusion of Native American Indian and Navajo turquoise and silver jewellery, plus other crafts in fashion, which also inspired my collection, ” he adds. Datuk Zang Toi is turning to timeless designs for his latest collection. Photo: The Star/GLENN GUAN/

Toi is grateful for those who have continued to support him in these trying times, and remains positive. But he also bemoans the current decline of the market in the fashion capital.

“The fashion scene is almost non-existent in New York at the moment.

“But I have been able to sell lots of couture masks and clothing to my very loyal clients throughout the country since we reopened in mid-June, ” he says.

In the past, Toi has paid tribute to Malaysia with collections denoting his roots. His 30th anniversary collection last year saw him using traditional textiles such as batik, sarong and songket.

He has also constantly talked about not forgetting his home country. Growing up in Malaysia is a big influence for him as a designer. His love for bright colours for example, is attributed to being Malaysian.

Toi was only 20 years old when he first landed in New York City to enroll at the distinguished Parsons School Of Design.

A year after founding his atelier House Of Toi in 1989, he caught the eye of editor-in-chief of Vogue Anna Wintour and was featured in the magazine – which later helped spur his business in the US. 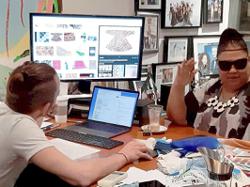 Are film depictions overdramatising the real-life legacy of fashion houses?
Richard Mille celebrates success on the ski peaks with great performance
Fashion is banking on well-known celebrities to boost its fashion films
Belgrade’s last craft perfumery is intent on seeing the trade survive
In bid to be more environmental-friendly, fashion looks to technology
Two-in-one makeup may very well be the best way to 'camouflage' your skin
Model Amber Valletta launches collection of eco-responsible fashion accessories
The pandemic is lending a modern twist to French vintage fashion sales
Strike a pose! Fashion's biggest party, the Met Gala, is returning – twice
Datin Vivy Yusof on Ramadan, Raya, and surviving a pandemic Premium