Lim with the gold medal that she won at the 21st ITF Taekwondo World Championship. Photo: The Star/Azlina Abdullah

Even though Michelle Lim started learning taekwondo from a young age, the importance of it did not hit home until one fateful incident in 2009.

At that time, Lim was training for a world championship held in St Petersburg, Russia and was jogging in a park early in the morning when she was almost sexually assaulted by a man.

“He was naked and tried to grab me. I managed to react quickly by kicking him and then proceeded to scream and escape. I definitely owe my alertness as well as the ability to make quick decisions in that situation to my training in taekwondo.

“After that incident, my training took on a more serious note and I started to relearn the purpose of all the 24 taekwondo patterns I had acquired as I realised that every proper block could save my life, ” she said.

Since she was 19, Lim has participated in over 25 national and international taekwondo tournaments, winning at least one medal in 19 national championships.

In August, the 38-year-old received her first international title by winning the gold medal at the 21st ITF Taekwondo World Championship at Plovdiv, Bulgaria. She also made history by becoming the first Malaysian female gold medallist for seniors (19-39 years old) in the patterns category. Lim at the 21st ITF Taekwondo World Championship this year in Plovdiv, Bulgaria where she won the gold medal and put Malaysia on the world map. Photos: Michelle Lim

Lim’s success did not come easy as she had to juggle her time between taking care of her family, work and intensive training sessions. On top of that, she retired from her last world championship 10 years ago in 2009.

“It was quite taxing having to resume training for such a major event, particularly because my physique was not the same as it was back then. There were times when I felt like giving up. At one point, I even felt like I was a bad competitor, a bad student, a bad daughter, a bad wife, and a bad mother, ” recalled Lim, who works in private client services with Maybank.

“However, things got easier the moment I honoured the struggle and believed that I could reach my goal, ” said the mother-of-two. Winning the world champion title did not come easy for Lim as she had to juggle her time between taking care of her family, working and training for the world championship.Lim’s journey in the martial art began when she was just six years old, encouraged and supported by her father.

“It was my elder brother who first started taekwondo lessons and I was intrigued by the breathing sounds made by the students when they were practising taekwondo patterns. So when my father asked if I wanted to join my brother for lessons, held at our primary school SRJK(C) Khai Chee, Segambut, I immediately agreed, ” said Lim.

Her triumphant achievement as world champion today is the culmination of over 30 years of sacrifice, dedication and perseverance.

While most of her friends quit the martial art upon reaching secondary school, Lim pressed on.

“During school holidays, my friends would always have plans to go somewhere. My plan was always to go for taekwondo training, ” Lim quipped.

For her, taekwondo goes beyond mere interest.

“Taekwondo is my way of life. I conduct my life based on the tenets of taekwondo – courtesy, integrity, perseverance, self-control and indomitable spirit. Taekwondo has taught me to always know my roots, to be loyal, humble and grateful. Taekwondo has also shown me that there are no shortcuts to achieving something. Hard work really pays off, ” she asserted.

Lim is quick to credit her father for her achievement as world champion.

“He has always been my biggest supporter. When I was in secondary school, my brothers and I took taekwondo lessons at the same time. We were not well to do but my father was very committed to sending us for lessons. That became a source of motivation for me to train hard as I always bore in mind the sacrifices that my father had to make, ” said Lim, the second of three siblings.

Aside from her father, Lim also attributes her success to her instructor, Master Tan Eng Kiat, who has 40 years of teaching experience in ITF taekwondo and is known to have produced many champions. 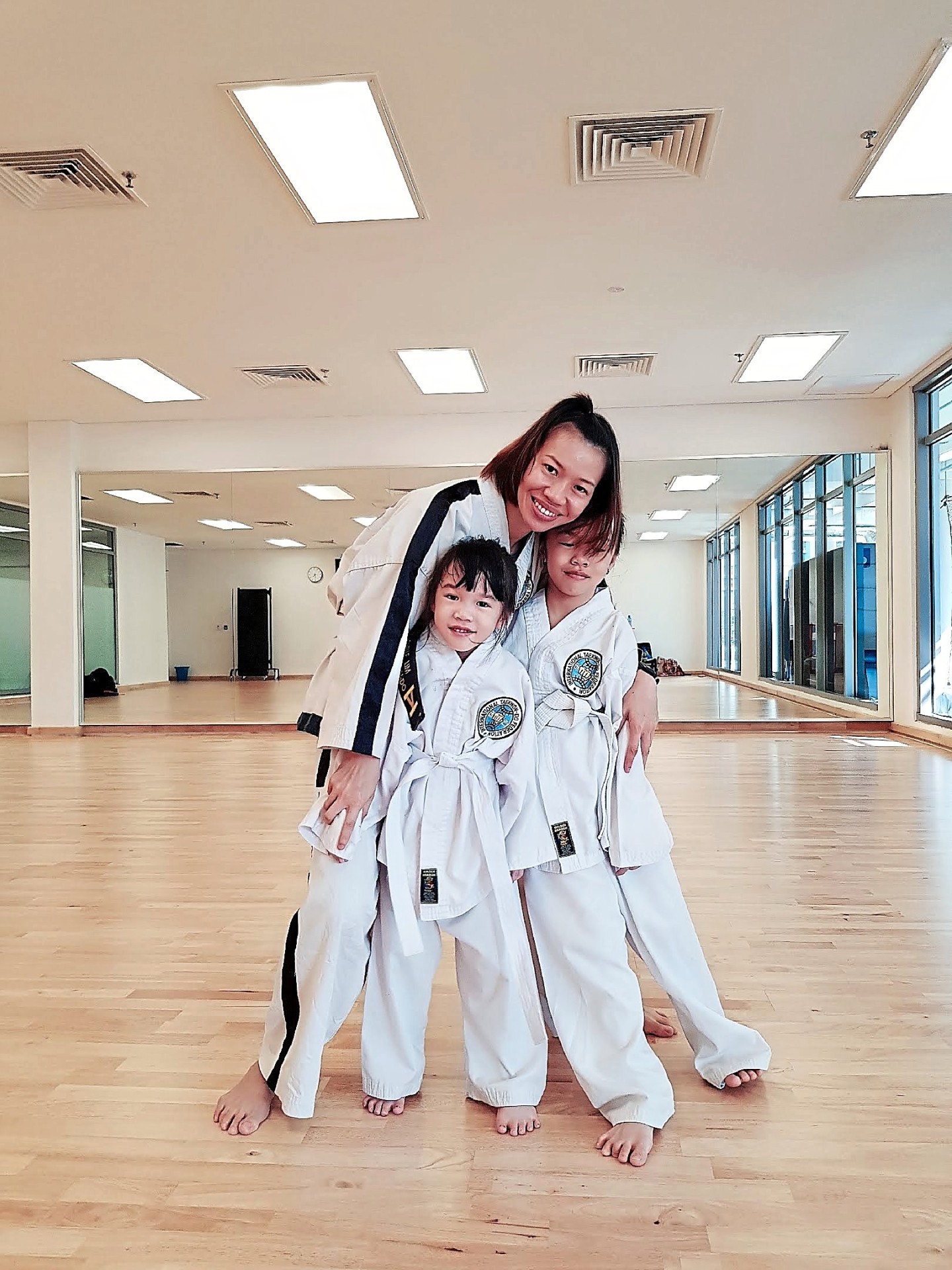 Lim’s two daughters, Daphne Ng Yi Qing, eight, and Sarah Ng Xin Ning, five, started picking up taekwondo early this year.“I met my master when I started learning taekwondo in primary school and he has been my instructor ever since. I feel very grateful that he was willing to coach me for the world championship, ” said Lim.

Her training begins as early as 5am, when she would train for an hour before heading off to work. After work, she would usually continue to train for another three hours.

“It is important to train smart and not train hard; to find a good balance between rest, training and diet. In preparation for the championship, I had training sessions every Monday, Wednesday, Thursday and Saturday. My target was to train for four hours each day with the exception of Saturday. Even so, there were many days when I achieved less than my target as I would be exhausted after a vigorous training session the day before, ” said Lim.

As for finding the right diet, there was a lot of trial and error involved, she explained.

“In general, I eat a normal diet. Whatever that I find lacking in my diet, I add on. I always make sure to replenish my proteins pre- and post-training sessions. I only began to drink protein shakes in the last two months of intensive training as I felt the wear and tear of my muscles, and needed it for fast recovery.”

Recommencing training after a 10-year break due to family and work commitments was difficult for Lim, but fortunately, she had help from her husband and his parents.

“I am very thankful for my husband’s support. Not only did he help to take care of the children, he also made sure that I had enough rest. My parents-in-law were also very understanding of what I set out to achieve and pitched in to help as well, ” said Lim gratefully.

Friends and colleagues also provided much moral support for Lim when she entered the world championship.

“I told everyone I knew that I was going for the championship as I wanted their invaluable support and encouragement. It was also a matter of pride for me to do my best as all my friends knew about my participation. That was the power of their support over me, ” shared Lim. 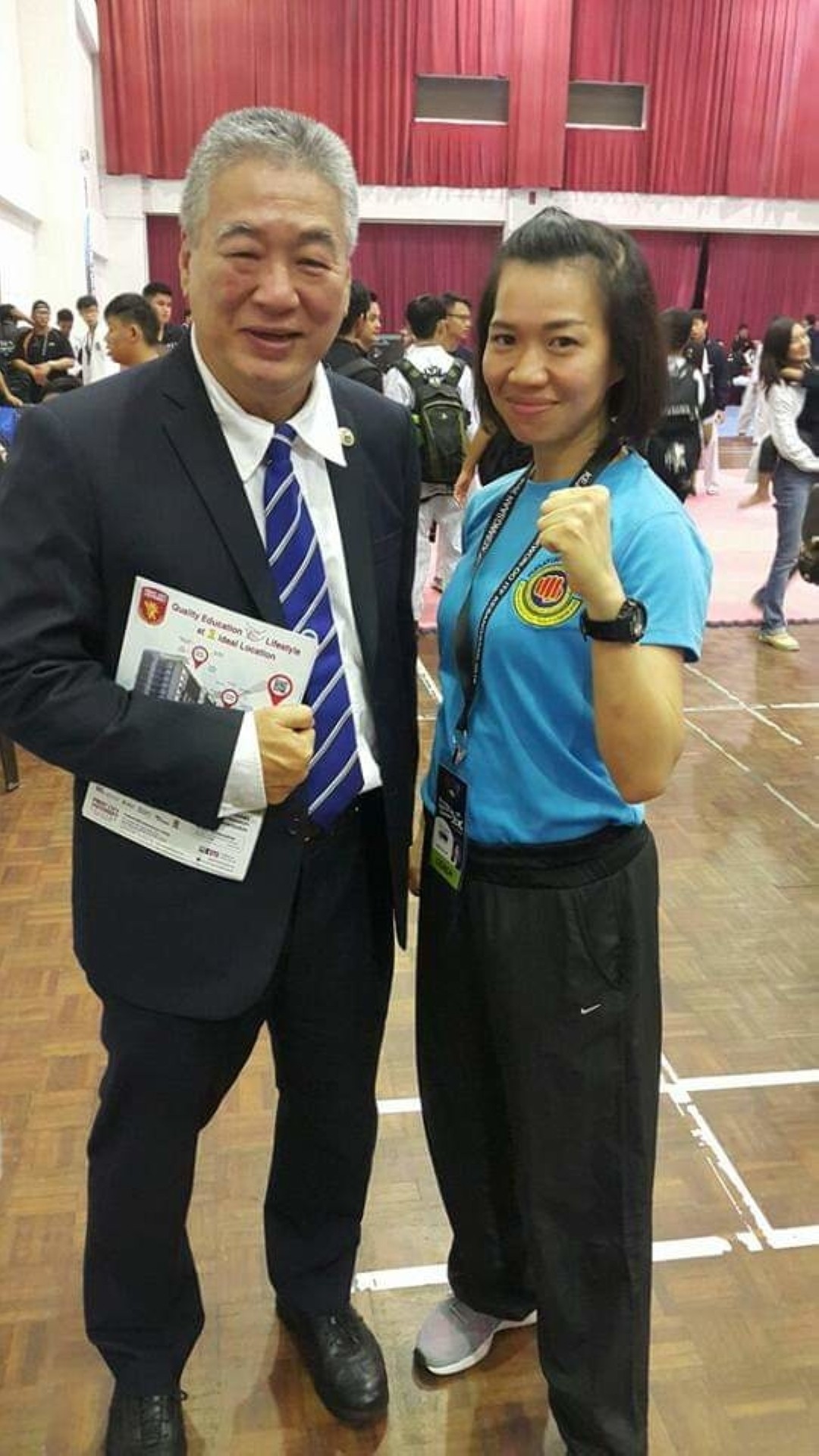 Aside from her father, Lim also credited her recent success to her instructor, Master Tan Eng Kiat.Even after becoming world champion, Lim remains grounded and feels she has much to work on.

“To be honest, I did not think that I could win. I thought that I would at least stand a medal chance if I trained hard for it. For the championship, I knew that my body memory was already there since I had been training hard. So I just needed to prepare myself mentally. After the championship, I realised that I needed to relearn my basics and make sure that they are good in order to be able to go further, ” said Lim firmly.

Unknowingly, in accomplishing such a monumental feat, Lim has become a source of inspiration for those around her.

“I actually inspired many taekwondo practitioners within my group who had given up taekwondo due to family and work commitments. They were my comrades 10 years ago. Now that they have seen me win the world championship, they have started to put on their uniforms again and resume training, ” shared Lim excitedly.

“I still have training sessions every Monday and Thursday. But now I would also go with my daughters on Saturday to accompany them as they train. It is like a bonding session between mother and daughter, ” she said with fondness.

Lim, whose motto is “faith can move mountains”, hopes that one day she will have the opportunity to share with the world her experience in training for the world championship.

“It is interesting to observe that though we may not speak the same language, we can still converse with one another on the basis of our common love for the martial art. That way, we can share our knowledge about taekwondo with each other. I hope that I will receive an invitation from overseas to share my experience in training for the world championship. This is also how we can promote Malaysia, ” Lim enthused.