Yong, who has been based in London since 2013, has been actively involved in theatre productions there. But he is more than open to working on Malaysia-based projects. Photo: Marc Brenner

He would enthusiastically take part in talent competitions during his school days, and there was no denying even back then that he had a certain charisma and presence on stage. But that didn’t stop him from excelling at school and going on to pursue his Bachelors of Law at King’s College London.

During his studies at King’s College London, the Miri-born multihyphenate (actor-singer-aspiring writer-director-vocal coach) undertook private lessons with vocal coach Kevin Fountain, who advised him to start training seriously if he wanted a career in musical theatre.

“That’s when I auditioned for several drama schools,” Yong retraced his journey, revealing what led him to get his Masters in Musical Theatre (for which he earned a distinction) at the Royal Academy of Music in London.

“When you train at drama school, you go through something called an agents’ showcase and you stand a chance at being picked up by agency,” the young man explained how he got signed on to talent agency The Narrow Road Company. The agents showcase happens during the process of training at drama school, and is common in drama schools in Britain, including for Bachelors programmes.

“I graduated in July 2017 and by December the same year I was booked for Miss Saigon. I was quite shocked when I got it,” he said of his professional debut as part of the ensemble in the critically-acclaimed Cameron Mackintosh production, adding that it has been a year full of hard work, new experiences and lots of fun.

The 2018/19 UK & International Miss Saigon tour took Yong, along with 38 cast members, to six cities in England, then for two months to Switzerland and Germany as well.

“I was able to learn so much from all the different departments, from wardrobe to sound and lighting. I got to see so many new places, sight-seeing during the day, performing at night! Touring life was a bit hectic ... it’s eight shows a week, you only spend about four to eight weeks at each place, and you basically have to find everything there on your own – from a doctor to a gym to your own accommodation.”

Yong used to perform in school talent shows, including the 2011 MY Challenge competition.

Yong speaks in a polished English accent that belies his local roots. It’s only when he makes a call to his mum, that he switches back to Mandarin with ease.

Based in London, he is back in Kuala Lumpur to spend time with his parents for the summer, and will be dabbling in local theatre while he’s in town.

Last weekend, he was in Dama Orchestra’s tribute concert The Moon Speaks For My Heart at the Tropicana Golf & Country Resort in Petaling Jaya narrating Teresa Teng’s life story, and performing two solos.

Yong is also part of a collaborative creative team for the multilingual, multi-genre tribute to Datuk Dr Usman Awang which will be staged from July 11 onwards at KLPac, where seven emerging theatremakers will put a fresh spin on the national poet laureate’s works in Don’t Let Usman Awang Know.

“I had booked an upcoming acting job in London which would only start in about three months so I thought it would be the perfect time for me to come back home and get involved in the performing arts scene here. I thought there was plenty for me to learn here in Malaysia, and at the same time, I could contribute back with what I had learned abroad,” said Yong.

After asking around for suggestions and emailing several theatre companies and organisations, Yong was overwhelmed by the support he got on social media, and was elated when KLPac got back to him and asked if he would be interested in directing.

In an interview before rehearsals for this show began, Yong shared: “I’m only halfway through the process, so I’m sure there are many more things that I’ll learn from it. But so far, I’ve learned how busy and thriving the arts scene is back home. In addition to the abundance of productions being staged, there are a lot of new works written by Malaysians. Having to cast talent for my show also made me realise the wealth of talent here. It’s very exciting and I cannot wait to work with my fellow Malaysians.”

Yong, who has been based in London since 2013, has been actively involved in theatre productions there. But he is more than open to working on Malaysia-based projects. Photo: Marc Brenner

Since the works in Don’t Let Usman Awang Know are all inspired by or related to the famous poet, Yong had to do some legwork leading up to his visit.

“I learnt a lot about Datuk Usman Awang’s works, and his contribution to the country. When I was writing my piece Pisang Goreng (inspired by Usman’s Penjual Air Batu), I had to do a lot of research about the street vendor licensing issue in Malaysia and also read the opinions of the different parties involved, of both the authorities and street vendors.”

Yong’s piece is a 10-minute two-hander, made up of a duologue that culminates in a song, and will feature the young director alongside his co-star Alia Nabil.

When Yong heads back to London, it will be for his next show (a rather exciting role in a Stephen Sondheim musical no less!) and he hopes to continue establishing himself as an internationally sought-after actor in both stage and screen.

Yong admitted that competition is very tough there with so much talent in the mature industry, but he hopes that with his unique skillset, he will be able to find success.

Dreams and hopes in the next five years?

“I’d like to be at least in the early stages of getting a Malaysian-themed musical into the West End or Broadway!” he offered optimistically, adding that he also hopes to help build the arts scene here in Malaysia, perhaps by founding or supporting a drama school, creating exchange opportunities, or putting on shows back home.

Catch Zheng Xi Yong in action at 'Don’t Let Usman Awang Know' from July 11-13 at 8.30pm at KLPac, Sentul Park, Jalan Strachan, off Jalan Sultan Azlan Shah in KL. There will be a 3pm matinee show on July 13 and 14. Tickets are priced at RM60 an RM50. For more information, visit www.klpac.org or www.proticket.com.my. 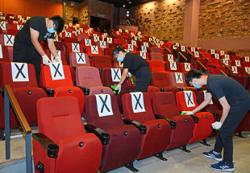