Do you need a listening ear? Thelma is here to help. Email lifestyle@thestar.com.my.

I have been married for two weeks now to a man whom I was in love with for nine years.

We started dating when we were doing the first year of our university degrees. I would say it's a love that happened out of possessiveness. I was in need of mental support as my family condition was really bad, with no one to support me morally or financially.

We started dating and everything was perfect, although I did tell him that I wasn't physically attracted to him.

Eventually, though, love blossomed and I started to love him deeply.

Like any other couple, we had a lot of fights but always made up after that.

In the fourth year, he chose to leave the city we had studied in.

Basically, I don't have anyone here, yet he choose his family over me.

Later on, when he tried to find a job here, he was unable to find one. So he went home and stayed on in his hometown for almost five years. I had no one to share my happiness and hardship with. Only his calls and visits (three to four times a year) helped me.

I was devoted to him.

Then Covid hit, and in the fourth and fifth year, we could not see each other.

Throughout the fifth year, we had so many fights and arguments yet I chose to stay. I was so depressed and lonely.

After Covid restrictions were loosened, we met. Both our families also met to discuss our wedding. By then, I had already secured a job.

So, we got engaged and the wedding date was fixed. He transferred back here as he secured a shift job.

We started to live together as the wedding would take place in just a couple of months.

Then things turned upside-down. There is a guy in my company who started to have feelings for me. Initially I rejected him, but eventually I fell for his care and love. I started to lie to my fiance.

The wedding day was nearing but I was not involved in any preparations for it.

Then I opened up to him and told him the truth.

He was very angry. Still, he asked me to stay and proceed with the wedding. He was not ready to lose me.

I agreed to do so, yet my heart never settled and I kept contacting the other guy. I told this to one of my stepbrothers, and asked that the wedding be stopped. But somehow he managed to convince me, and I agreed to carry on with it.

I was not even a little happy in my marriage.

I tried to surrender, yet something was raging in my heart. I have thought about suicide many times, but there is no courage to act on it.

On the side, the other guy keeps asking me to leave and start a new life with him.

My husband is looking to patch things up but I can't move on as fast as he expects.

I started to avoid everyone; I just don't want to meet anyone. I just hate this life. I've started to take sedatives.

Several things stand out in this letter. You have never gotten along with your family, and you met a man who liked you. It's no wonder you fell in love. We all need validation.

However, after being separated for over five years by work, the pandemic and various circumstances, the relationship was in trouble. You say you were alone and desperate but still clung to hope. Again, not at all unusual.

In the pandemic, many people who were separated from loved ones hoped to reconnect after the enforced distance. For some, it did. For many, it did not. Distance can kill relationships.

When you came back together, you knew your relationship was over. You said so to your partner and then again to your stepbrother. However, neither was interested in your feelings. All they cared about was bulldozing you into this marriage. What on earth were they thinking?

As for you, from the timeline, you're in your late 20s. My dear, why on earth did you not put your foot down? Why did you let yourself be bullied into this awful commitment that you didn't want? This lack of care for your own needs concerns me deeply.

As you are suicidal, I urge you to go straight to a hospital and ask to see a psychiatrist, a medical doctor specialising in mental health issues. You should be assessed for suicidal ideation, stress, depression and anxiety.

As soon as you can after, hopefully on the same day, also sign up for sessions with a therapist, a psychologist or counsellor who can talk to you. If you're short on cash, check the numbers above.

In the first few sessions, focus on managing your anxiety, stress and work out your support group. Discuss why you don't prioritise your needs and start doing so.

As you are deeply unhappy and you don't plan to spend the rest of your life with your husband, a third urgent call should be to see a lawyer to discuss an annulment or separation.

When you've done this, spend some time thinking about your ideal life.

Frankly, I don't like the sound of this other man because you rejected him and he persisted. That sounds like a man who cares about his own interests, not yours. And I think you've had enough people in your life who are like that.

Get urgent help so you can manage your anxiety and suicidal thoughts. Discuss healthy connections in therapy and take the next few years very slowly. Know I'm thinking of you, OK?

Dear Thelma: Our relationship seems off but I'm not sure how to deal with it 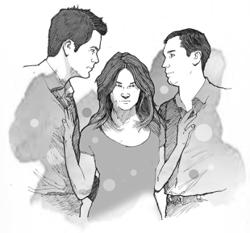