Agricultural workers clearing weeds from a Malanga plantation in Batabano, Cuba, on Oct 25. The rainy season, already an obstacle to Cuban agricultural production, has gotten longer and wetter. Photos: AP

Yordan Diaz Gonzales pulled weeds from his fields with a tractor until Cuba’s summer rainy season turned them into foot-deep red mud.

Now it takes five farmhands to tend to Diaz’s crop. That shrinks Diaz’s profit margin and lowers Cuba‘s agricultural productivity, already burdened by a US embargo and an unproductive state-controlled economy.

Like the rest of the Caribbean, Cuba is suffering from longer droughts, warmer waters, more intense storms, and higher sea levels because of climate change. The rainy season, already an obstacle, has gotten longer and wetter.

“We’re producing a lot less because of the weather,” said Diaz, a 38-year-old father of two. “We’re going to have to adapt to eating less because with every crop, we harvest less.”

Diaz used to produce black beans, a staple of the Cuban diet and his most profitable crop. His black-bean production has dropped 70%, which he attributes to climate change. A month after Hurricane Ian hit Cuba, Diaz was farming malanga root, a Cuban staple that is more resilient to climate change, but less profitable than beans.

Diaz used to buy supplies a year or two ahead of needing them but his earnings are so unpredictable now that he buys his supplies right before the harvest.

Agriculture has long been a relative bright spot in Cuba’s struggling economy. The socialist government has had a relatively liberal hand with food producers, allowing them to pursue their economic interests more openly than others in Cuba.

Cuba has ample sun, water and soil, the basic ingredients needed to grow plants and feed animals. By changing the way nature functions in the Caribbean, however, climate change is tinkering with the raw elements of productivity.

When Ian hit Batabano, about an hour south of Havana, it flooded fisherman Orbelis Silega’s home and destroyed his fridge and TV. He was already struggling due to reduced fish stocks.

“The house was halfway full of water,” said Silega, 54. “Everything was underwater.”

Cubans are leaving the island in the highest numbers in decades.

American authorities encountered nearly 221,000 Cubans on the US-Mexico border in fiscal year 2022. It was a 471% increase from the year before, according to US Customs and Border Protection.

As with everything in Cuba, the outflow is being driven by a complex mix of domestic management of politics and the economy, and relations with the United States and other countries.

A part of what’s driving the flow is climate change, which cost Cuba US$65.85bil (RM295bil) in gross domestic product between 1990 and 2014 alone, 9% of its total GDP, according to Dartmouth College.

“Caribbean economies, tourism, agriculture and fishing, are at the forefront” of climate change, said Donovan Campbell, a climate-change expert at Jamaica’s University of the West Indies. 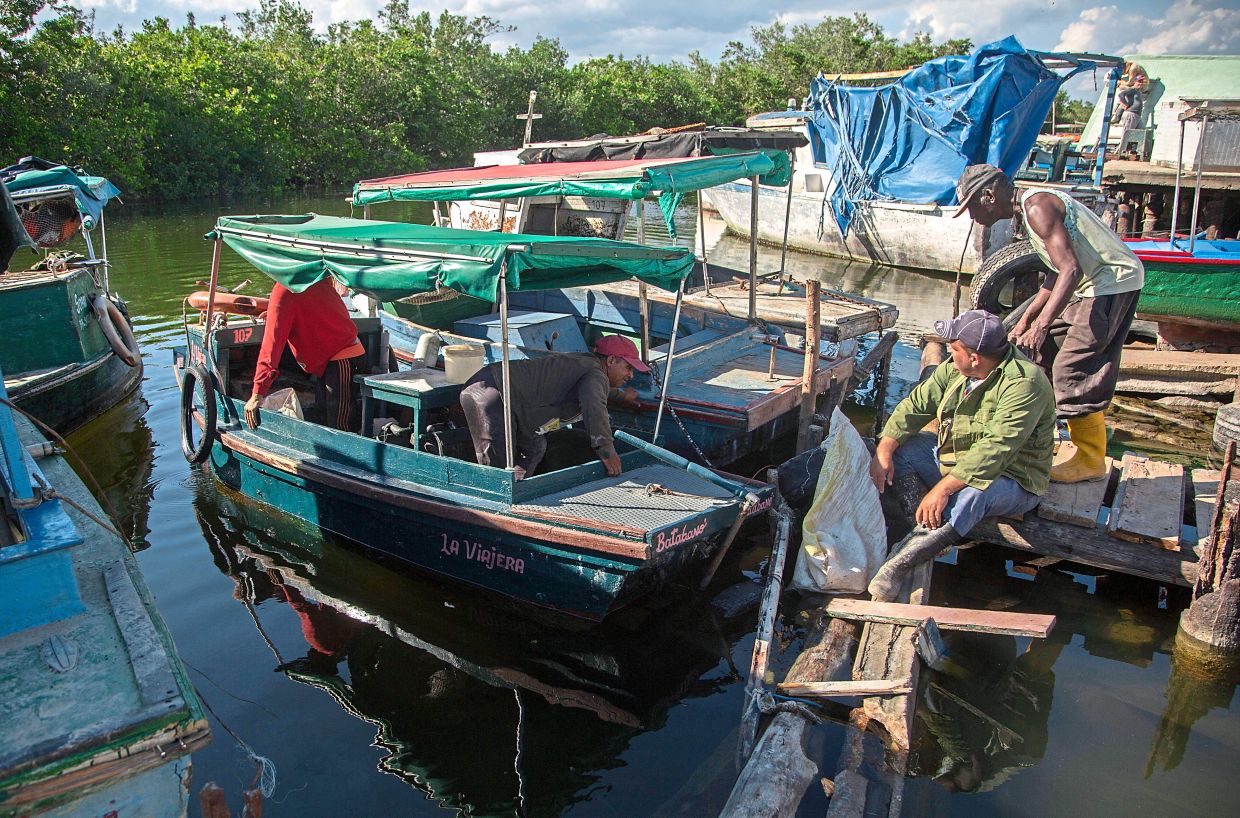 Fishermen park their boats, after returning in Batabano, Cuba, Oct 25. Their catch has been badly affected by climate change.

The US$2-US$3 (RM9-RM13) that farm hand Romelio Acosta earns for 10 hours of work isn’t enough to pay his expenses.

“Right now there’s no money and there’s no food,” said Acosta, 77. ”Everything is more expensive than people’s salaries can pay for.”

Cuba was already in one of its worst economic, political and energy crises in decades, thanks to the coronavirus pandemic and the Russian war with Ukraine, among other factors.

The US trade embargo “impedes us from accessing the resources we could have that would make it possible for us to recover from these events as quickly as possible,” said Adianez Taboada, vice minister of Cuba’s Science, Technology and Environmental Ministry.

Around Batabano, the coastal town hit by Ian, mattresses soaked by the storm still hang on the wobbly wooden houses. 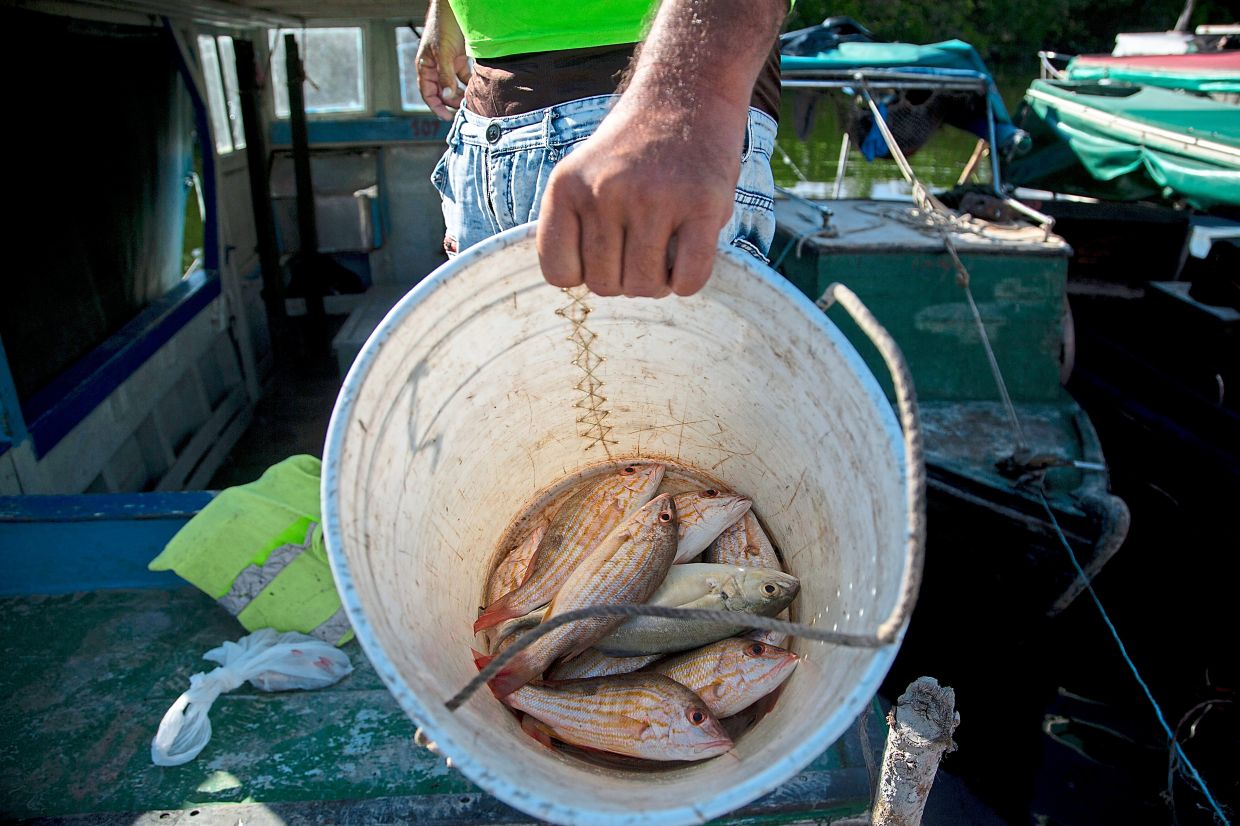 A fisherman shows his poor catch of fish in Batabano, Cuba, Oct 25.

“You try to salvage what you can,” Silega, the fisherman, said.

“This town without fish is nothing,” Silega said. “The best fish, the ones that still appear, you have to go much further to find them.” – AP

There are no ‘natural disasters’, just man-made vulnerabilities