Veterinarian Nataliya Mazur (left) and an employee examining a dog in a temporary animal shelter in the Ukrainian capital Kyiv recently. Photo: AFP

The three-year-old cat comes from Bucha, a suburb of the Ukrainian capital now synonymous with alleged Russian war crimes since Moscow launched its invasion of Ukraine nearly four months ago.

“His owner in Bucha survived shelling and the occupation,” Mazur explains. “But eventually she died. She couldn’t endure the situation.”

Murzik’s fate is shared by animals across the country, who have suffered alongside humans since Russia invaded on Feb 24 despite great lengths to save them.

Footage of Ukrainian civilians evacuating their devastated homes with their beloved dogs and cats in their arms went viral at the start of the conflict.

But like people who stayed behind, animals have been killed or wounded by Russian shelling. Many have lost their homes or owners.

Other pets have been lucky. Rescued by civilians or soldiers and brought to shelters like Mazur’s to be fed and cared for, they have a chance of a new life and potentially new owners.New homes

Since Mazur set up her temporary shelter at the end of March in southern Kyiv, 132 animals from the region around the capital and the east – the current epicentre of the fighting – have lived here.

Ninety-seven of them have already found new owners, a sign perhaps of the human need for positivity and kindness to offset the bleakness of war.

There are currently 19 dogs and nine cats in the sanctuary, some jumping about and barking, others curled up in their enclosures.

A dark dog lies peacefully on a rug.

The paper card attached to his wooden door says his name is Kai.

He is seven and he arrived on April 19 from Borodianka – a northwest suburb of Kyiv where Ukrainian President Volodymyr Zelensky accused the Russians of atrocities “much more horrific” even than Bucha.

Kai has been de-flead and has a good appetite.

“When the war began, the number of homeless pets shot up,” says Mazur, who also heads Kyiv’s animal hospital.

“We set up this shelter with the help of the Kyiv authorities and volunteers, to look after pets and help find them new families.”

It is housed in one of the pavilions of an open-air exhibition centre.

Volunteers come and go, inspecting the animals, feeding them and taking them for walks around the grassy grounds.

“If the pet has lost its owner and remained in a place where there’s fighting and explosions, then first of all it needs socialisation,” Mazur explains.

“They’re used to being with humans, so they need tenderness and care. They need someone to sit and talk to them.”

Animals have also helped the war effort, some famous in Ukraine for their unusual abilities.

Patron, who has more than 290,000 followers on Instagram, received a medal for Dedicated Service from Zelensky in May and was awarded a special prize at the Cannes Film Festival the same month.

In the Kyiv shelter, volunteers shower the animals with affection.

“My wife and I love animals very much,” says Dmytro Popov, after walking a small dog with a fluffy tail across the park.

“We want a dog, but we’re not allowed to have one in our rented apartment. So, we decided to come here and help as much as we can,” the 28-year-old botanist smiles.

Earlier in the day, another two dogs were picked up by their new owners.

“I’ve been friends with dogs since I was a child,” 31-year-old volunteer Yuriy Manko says.

“I don’t know what will happen tomorrow, but I want to keep coming here.” – AFP/Dmytro Gorshkov

Abandoned in east Ukraine, cats and dogs look for new homes in Russia

Equestrians race to save horses abandoned in Ukraine warzones 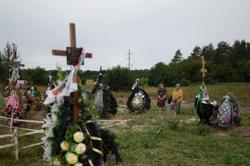 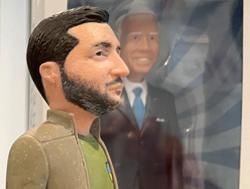