A pop-up bike lane in Berlin's city centre. The bike path was put up during the Covid-19 lockdown to help people commute to work without having to use public transportation. Photo: AFP

A Berlin collective is campaigning for the German capital's entire city centre to be closed to cars and become a zone reserved for pedestrians, public transport, bicycles and scooters, for example.

A petition that counts more than 50,000 signatures is calling for the launch of a referendum, with a view to implement the project by 2027.

For the citizens behind this initiative, called Berlin Autofrei ("Car-free Berlin"), a car-free city centre ensures a better quality of life, cleaner air, more space for everyone, safer streets and, of course, is better for the environment.

The idea is to prohibit access to private cars in an 88sq km zone, delimited by the "S-Bahn-Ring" railway line that encircles the city centre.

Berliners have the opportunity to pass certain laws in their city by referendum. And this is why this increasingly popular initiative could well be on the road to success. In the best case, a referendum could take place in 2023 and the project could really come to life after a four-year transition period.

Berliners who support the idea of a virtually car-free city centre are in line with the times, as so-called "low-emission zones" are now springing up everywhere.

As soon as 2022, Paris will set an example, by reducing traffic in the very centre of the city, which will then be closed to most cars. Elsewhere in Europe, cities such as Barcelona in Spain, Bristol in England and Leuven in Belgium are adopting similar policies.

In Canada, Montreal tested the concept this summer by making many of its shopping streets pedestrian – a solution that could soon become permanent in certain areas. – AFP Relaxnews 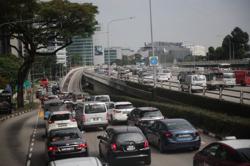