Heart and Soul: Soaking up the Merdeka spirit 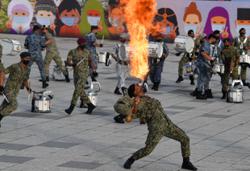 Do you have any real-life, heart-warming stories to share with readers? E-mail them to star2.heart@thestar.com.my. We’d love to hear from you. Please keep your story within 900 words. You may send in 1-2 photos (1MB, captioned) to accompany the story.

From 2011 to 2017, the National Day celebration was held at Merdeka Square (Dataran Merdeka), in Kuala Lumpur. But since 2018, Merdeka Day celebrations have been held in different states in Malaysia.

The Merdeka Day parade was a highly anticipated event for my late mother, Dawn Usharani Biswas.

As my parents had retired and now lived in their hometown far from the city, all my mother could do was anticipate and savour the moments via her television screen. She would remind everyone within hearing range not to disturb her with questions, errands or kitchen duties unless the house was on fire!

The night before, she would buff up her comfortable arm chair with cushions, place the Jalur Gemilang flag across her seat and arrange her snacks in a rattan basket. On watching her enthusiasm, my father would shake his head and smile sneakily at her childish excitement.

It had been my mother’s lifelong wish to see a live Merdeka parade. Finally, in 2017, on a short holiday to Penang, her wish came true. Unknowingly, we had booked a stay in a hotel that faced the road that was going to be used for the state-level National Day parade.

People turned up as early as 7am to get themselves the best spot to view the colourful parade. Both tourists and Malaysians of all ages were observed celebrating this event with excitement and flag-waving cheers, and some in their Jalur Gemilang costumes. The state flag and Jalur Gemilang lined the route of the parade, while showcasing Penang as a melting pot of cultures.

Seated in her trusty wheelchair, my mother who had just passed her 88th birthday that August, was accorded a special area to view the parade along Light Street, Penang. She was overwhelmed by the Merdeka spirit as she watched the traditional dances which kept the crowds entertained around the packed streets of the Esplanade.

The Yang di-Pertua Negeri Tun Abdul Rahman Abbas and his consort were in attendance to mark the start of the celebration. It began with the inspection of the guard of honour followed by the marchpast of the main flag bearers and the flag-raising ceremony.

The band for the celebration was the Second Division Territorial Army Regiment battalion. A total of 5,800 people from various government agencies, school bands, uniformed bodies, universities, the private sector, and NGOs took part in the parade.

My mother had tears in her eyes as she soaked up the Merdeka spirit at the parade.

As my mother continued waving her flag in high spirits, she suddenly was surrounded by many photographers from the local press who were there to capture the sense of national unity among the crowd. Many took candid shots of her presence, and she was also interviewed by the press that day. And just like a celebrity, she shared what that special moment felt like for a Malaysian citizen who was born in 1929. Her strong display of loyalty to the country and sense of patriotism, appeared in StarMetro on Sept 1, 2017.

Her words of wisdom were: “Life is full of parades. Few, if any, can participate in every parade. But neither should we spend our lives simply watching these victory parades.”

Life with its trials and tribulations are also about helping one another, sharing good and bad experiences, celebrating customs and traditions while embracing one another as family. Without participating, it is hard to do that. Yet, if all we ever do is watch, then there is no purpose in celebrating the historical events that may just end up being known as “forgotten parades”.

I believe that, by the goodness of God, life is meant to be lived in harmony and not merely observed. This Merdeka Day, wave the Jalur Gemilang in celebration and let us have faith in the respectable symbol of a peaceful nation.