Love and hot dogs: The US couple that competitively eats together

A hot dog eating contest, with soggy hot dog buns being shoved into mouths, might not be the most romantic setting.

But for Sarah and Juan Rodriguez, it helped spur their first kiss.

The spouses from Naperville, a western suburb of Chicago, competed in Nathan’s Famous Fourth of July International Hot Dog Eating Contest, a nationally televised event that welcomed 28 competitors to Coney Island in New York in July.

Sarah came in second place and set a personal record in the women's competition by consuming 24 hot dogs and buns. She was beaten by Michelle Lesco, who ate 30.75 hot dogs and buns in just 10 minutes.

It was arguably another highlight in what's been a big year for Juan and Sarah.

The two met in 2017 at this same event. He had noticed her social media posts; they had briefly chatted through Instagram.

But it wasn't until he was at the gym in the weight area with other competitors that they met in person. 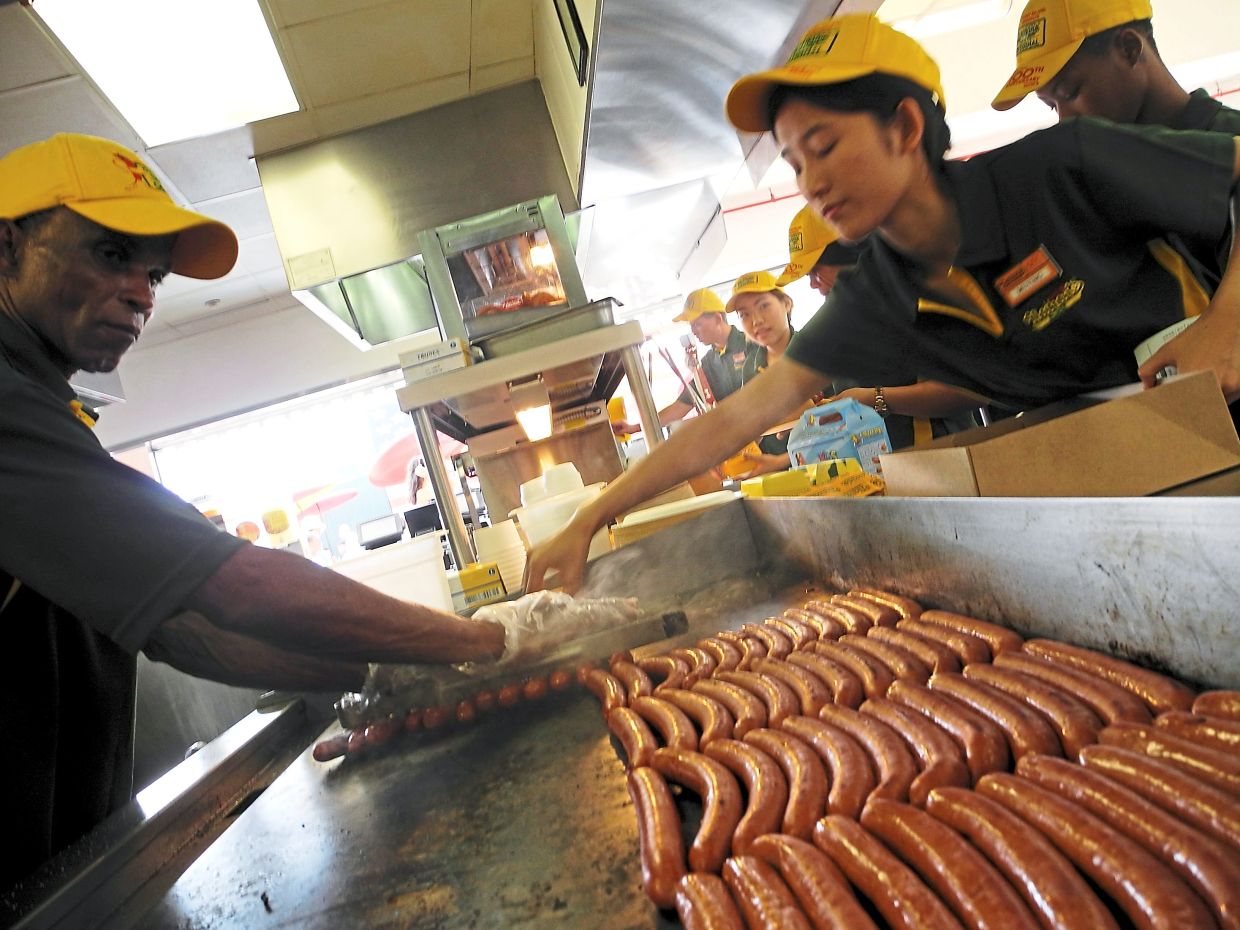 She came in with her red hair blazing, he remembers.

"My impression of her was that she's a loudmouth, just like me, and has a big personality, " Juan says. "We show it in different ways. I think that's what attracted me to her."

All she knew of him was a boisterous onstage persona – he wears tights with pictures of himself, shakes his butt and entertains the crowd.

"He steals the show, " she says. "It turns out underneath all of that clout, that was just a character. Underneath is a very, very, very, good, loving man who is my best friend."One night, they ended up at a bar the group had rented out – the eaters consider it like their Oscars party – and began talking. He walked her back to the hotel, where they had their first kiss.

"That first hug, that first kiss, pretty much changed both of our lives, " she says. 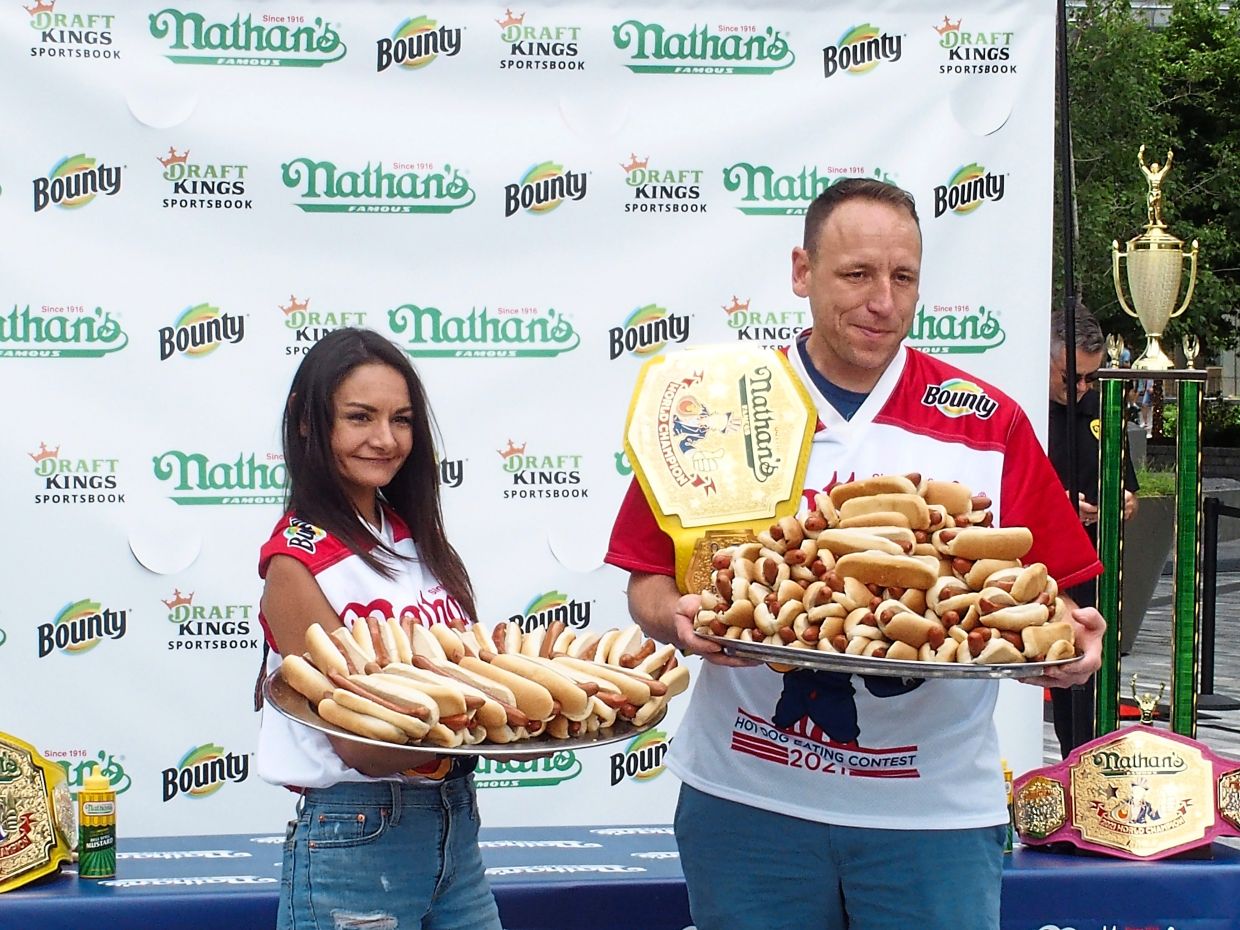 From there, they began a long-distance relationship. He was living in Illinois; she was in Seattle. They tried to see each other at least once a month, flying back and forth, spending time downtown walking Michigan Avenue.

Meanwhile, they grew their own careers; he is a personal trainer and model while she is a bodybuilder and fitness and nutritional coach through her company, Whatever It Takes Health.Her first contest was chowing down Peeps (marshmallows in animal shapes), 67 in five minutes. "I would smoke that now, " she says.

In 2019, he moved to Seattle so they could be together, and they ended up transitioning from long distance to living within six metres of each other during the pandemic. The year was hard on people in their field, with contests cancelled.

Their home became a refuge for people to stay the night or seek support. "Our house was the house to come to, " he says. "We love to make sure everyone is taken care of."In March this year, the two married on a friend's bar patio in Seattle. Continuing their big year, they moved to Naperville in April and have a dog, a miniature dachshund – as they note a "wiener" dog – named Kujo.

In previous years, both qualified multiple times for Nathan's.

Sarah, the 26th-ranked eater by Major League Eating (MLE) – the organising body – has participated in the contest four times now, while Juan is the 16th-ranked eater by MLE and has competed in the hot dog competition for 10 years – his highest placing was 6th in 2014 (32 hot dogs and buns).

He prefers water training, where someone drinks a lot of water to train the stomach to expand. She prefers to pair water with high-density, low-calorie food like salads, and vegetables like cauliflower and broccoli.

Sarah learned she had a special skill for putting food away after college nights out with friends. After ordering food like pizza and wings, friends would ask where all the food went. She'd point to her belly and wave. Eventually, someone suggested she consider competitive eating.

She watched online videos and noticed not many women were in the sport.

"Women in society are very much told, 'Don't eat too much, don't take up too much space, don't appear gross or disgusting', " she says. "Competitive eating is friggin' gross. This is not a glamorous thing."

As a child, Juan would race his siblings to finish dinner, graduating to a family Easter tradition of seeing who could eat the most pancakes. From there, he attended local restaurant food challenges and then contests that paved the way to Nathan's.

"I'm a showman through and through, an entertainer, " he says. "This is essentially wrestling and eating at the same time."

The couple's chemistry is clear in videos like one where they eat 432 doughnut holes. They each have nicknames; his is "More Bite" and hers is "BAB", including a tattoo, for "bad a-- b----".

But Juan and Sarah want to dispel that misconception; it is a sport people take seriously, keeping their bodies fit and in shape to eat as efficiently as possible. – dpa

Paris gets a taste of pizza-making robots

Calling all Sudoku enthusiasts: The Championship returns to Malaysia
Don't let your dog slurp from dirty puddles
First ever KL Design Festival kicks off today, aims to rejuvenate downtown KL
Droughts and rising seas put Cuba’s agriculture under threat
What is 'carchitecture' or the art of including the car in the interior design?
Climate crisis: There is no Planet B
How to safely dispose of your old e-bike battery
Saving Malaysia's songbirds – the straw-headed bulbul and white-rumped sharma
COP27: The climate summit flinched on phasing out all fossil fuels
In Cape Verde, ocean waste is being turned into bags and bracelets