A schoolgirl in southern China has shot to fame with her car repair skills and triggered a heated debate on gender boundaries at work and the value of vocational education.

Gu Huijing, a 17-year-old student at Shenzhen No. 2 Vocational Technical School, outshone her peers after her passion for car mechanics saw her win a car repair competition in the male-dominated field.

Gu won first place in an auto repair contest among vocational school students in Guangdong province in April, becoming the first female in the province to attend and win the prize, the Southern Metropolis Daily reported earlier this week.

She also broke the school’s record for car engine disassembly and assembly, which she did in just 26 minutes, half a minute faster than the last record holder, the report said.

Gu has since become a celebrity on Chinese social media, with many praising her for breaking gender stereotypes as well as prejudice against vocational education.

“Many people think auto repair belongs to men, and that it doesn’t suit women. This is a stereotype. Women actually have their own advantages in this regard. For example, they’re more focused on details. I think there’s no gender boundary at work,” she was quoted as saying.

She has had a natural affinity for vehicles since childhood, she said. She said petrol smells good and the sound of an engine is pleasing to her ears.

However, despite her talents, her family didn’t support her decision to major in auto technology after finishing her secondary education in 2019.

“Because they thought auto repair is useless for girls. They wanted me to learn something easy for girls to work on, something leading to a job with a comfortable working environment,” she said.

What a brave and great girl ... Whether one can succeed in an area is not about gender. You’ll see results as long as you work hard
Online commenter

Despite some initial discomfort with the dirt and grease that comes with the field, she said she gradually conquered her unease because of her passion for the trade.

For the four months leading up to the contest, she woke at 6am each day and worked until late in the night.

“I firmly believe that girls can do well in positions that are widely tagged for men. On the other hand, vocational education is another choice for many students to stand out. It can help people find what fits them in future development,” she said.

The topic about the post-2000s girl winning first place in the provincial auto repair competition on Weibo hit 200 million reads and over 22,000 comments by Thursday, with many calling for the elimination of gender stereotypes. 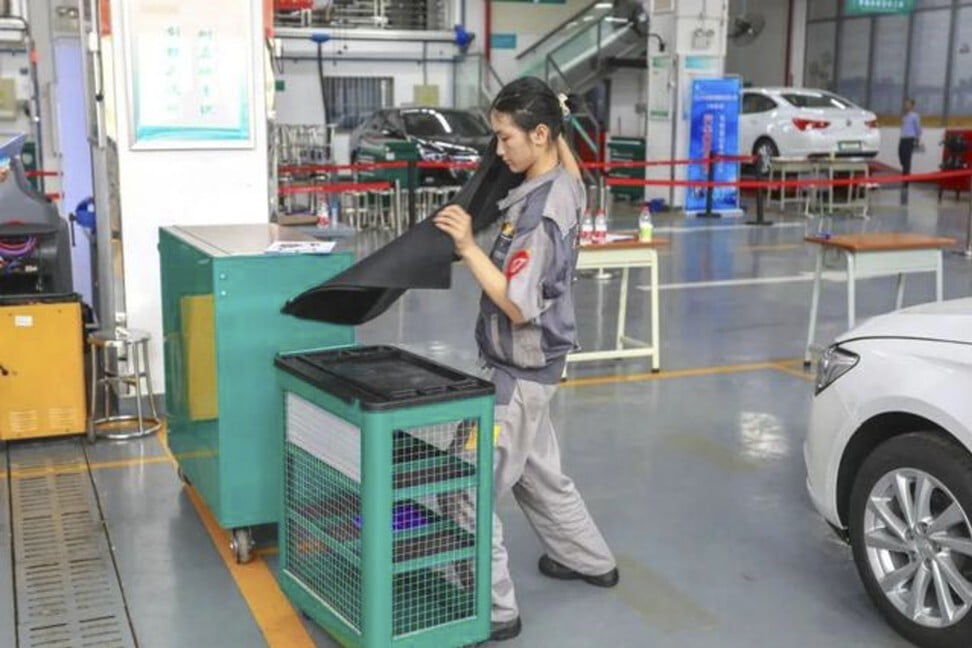 “For issues that don’t require large muscles to solve, men and women start from the same starting line. The difference lies only in whether one is willing to spend more effort,” one user commented.

“What a brave and great girl ... Whether one can succeed in an area is not about gender. You’ll see results as long as you work hard,” another said.

Gender sterotypes absorbed at a young age can harm the health of adolescents for the rest of their lives, according to the latest findings by the Johns Hopkins Global Early Adolescent Study.

Based on in-depth surveys conducted with more than 10,000 boys and girls living in communities with low incomes in China, Indonesia, the Democratic Republic of Congo, Ecuador and Belgium, researchers found that youth who embraced more gender-equal perceptions were less likely to report depression.

Gu’s story also generated heated discussion about China’s vocational education system, which the authorities have been working to promote but parents are no longer in favour of as salaries are higher for white-collar work.

In a bid to stabilise the job market and improve the quality of its labour force, Premier Li Keqiang vowed that vocational schools across China would enrol 2 million more students than previously planned for the years 2020 and 2021.

Over 35 million people would receive occupational skills training in the same period, he said.

In China, after a nine-year compulsory education, students must pass zhongkao to enter a senior high school and spend three years there before they can sit college entrance exams or gaokao.

“Yes, it’s OK that you do poorly in the zhongkao and fail to be admitted by a senior high school. You can be a great blue-collar worker after attending a vocational school. But as parents, the difference between an outstanding blue collar and an outstanding white collar is the smell of them; one wears high-quality perfume and the other petrol. What kind of smell would you like your child to wear?” a Weibo user asked, commenting on Gu’s case.