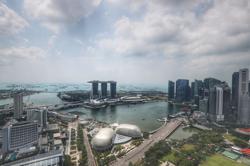 Aleksi street, Helsinki, Finland. The Finnish capital took first place in the ranking. It scored well in all areas, especially in the ‘Happiness, culture and leisure’ criterion (100/100). — AFP

While the study, carried out by the company Kisi, naturally focuses on the working conditions of city residents, factors such as physical activity, overall well-being and access to places of culture and leisure were also taken into account.

The index also shows how cities have adapted to the pandemic, notably with the rise of home working. And once again, Scandinavian countries have made a good showing.

The Finnish capital takes first place in the list. While its inhabitants may not be spared cold weather and “white nights” in the summer, they benefit from enjoying the most days off per year (30). Helsinki also scores well in all areas, whether in regard to remote working possibilities (38.9%), well-being level of inhabitants (97.7/100) or safety within the city (97.3/100).

With a minimum of 25 paid vacations offered per year, a score of 41% for remote job opportunities and optimal access to health care (100/100), the Norwegian capital was propelled to second place in this ranking.

This city, located in the German part of Switzerland, seems to be a good place to work, as it is the one in the top 5 where remote working is the most developed (44.9%). The overall happiness rate of its inhabitants is estimated at 94.3/100.

Sweden, the European champion of parental leave, offers 240 days (for both mother and father) after the birth of a baby. This means a total of 480 days to be shared between the two parents. Its capital, Stockholm, also gets a score of 98.3 for inclusivity and tolerance, the best in this category just after the city of Berlin (100/100).

Those lucky enough to be working in the Danish capital are able to take advantage of a minimum of 28 days of paid vacation per year. This is almost as much as in some German cities, such as Munich or Hamburg, which offer 30 days.

At the very bottom of the ranking is Malaysian capital Kuala Lumpur, with an overall score of 50/100. Also near the end of the list are Thai capital Bangkok (51.3), Argentine capital Buenos Aires (51.6), Brazilian city Sao Paulo (52) and Los Angeles (54.2).

Anyone dreaming of working in Paris a la Emily of Netflix fame should know that it came in 27th place with an overall score of 77/100, just below the average. Its remote jobs offer was evaluated at 37.7%, which is close to that of Seoul, the capital of South Korea, which has one of the lowest scores in the ranking in terms of overworked population (19.5%). – AFP Relaxnews

How green spaces can improve the health of city dwellers