The return of the wall: How the pandemic is transforming home layouts

High-walled sofas and other furniture (like the modular S5000 Retreat system by Thonet) can create a room within a room. Here tables and sockets are added to turn these spaces into workplaces. Photo: Giacomo Giannini/Thonet/dpa

The majority of new designs for homes and offices in Western countries share one trademark feature: an open-plan layout.

The kitchen, dining room and living room all flow into one another. The study, playroom and, in extreme cases, even the bedrooms are part of a large space, almost completely without walls. It's been the dream for years.

But then came the pandemic and the restrictions on everyday life, working from home and home schooling, with family members practically sitting on top of each other – all without walls and doors that can be closed.

"Open-plan living is not all that practical right now," says Gabriela Kaiser, an analyst on interior design trends.

There's a lack of quiet places to make phone calls, work and, above all, a space to take a breather and just be alone. She recommends equipping the space with moveable partition walls, or with modular furniture that can be taken apart. This "Room in a Room" planning concept by Leicht was actually intended as a walk-in utility cupboard. But in a time of working from home, it takes on a new function: the cube integrated into the room becomes a work corner. Photo: Constantin Meyer/LEICHT/dpa

Screens are the quickest and easiest solution to partition off a corner of the room. For example, the work corner in the bedroom that you don't want to see while you're relaxing in bed. You also probably don't want your teammates to see your bed on video calls.

Screens can also help corner off your island of retreat. Partitions like this are a signal to your flatmates, as Kaiser explains: "When I'm behind it, I need a moment to myself without being disturbed."

Before the pandemic, experts like Kaiser were talking about the fact that in a large open-plan living space, it makes sense to separate islands from each other, at least visually, in order to give structure to the large area. Certain areas were assigned certain functions – for eating, watching TV and working, for example.

Things have moved in the opposite direction again, at least temporarily, with separated spaces now being created within the open floor plan. Large bookshelves placed in the middle of the room are suitable for both – creating a visual island as well as a real separation.

They can be well stocked, or have less books and be more loosely organised. Chests of drawers and modular elements complement the typical bookshelf look. If you have enough space, you can also separate off a work area. Some manufacturers offer a desk-bookshelf combination. Shelves arranged in an airy way can be a room divider, but at the same time, leave a large living space with its open flair. Photo: AMK/dpa

Moving away from the dining table

In recent years, the desk or even the study has increasingly fallen victim to technological developments. It's been possible to work on a small notebook or tablet from the couch, but also at the large dining table in the living room.

It became the centre of family life. It's where we ate, played, talked. Many people also ended up working on their laptops here, when they still had a few things to do after they got home from work.

All this has now intensified: The dining table has replaced the office, and has even become the classroom – and still has to perform all the other tasks from the time before the pandemic. But this system is no longer working for most people. The solution can be to break up the hub – for example, by creating real work corners or rooms again. Think of them as side tables. The small FK12 FortyForty cubes by e15 can also be assembled into a flexible room divider. Photo: e15/dpa

High-walled sofas as a retreat

A number of manufacturers are currently developing space-saving desks – for instance in the form of panels that fold out onto wall shelves. Some furniture manufacturers are also creating sofas and dining nooks with extra high back and side walls, creating a cube that's closed on three sides. A small side table or integrated table turns it not only into a cosy retreat but also into a mini study.

And what will happen to open-plan living after the pandemic?

Kaiser is sceptical: "In the past, the trend was for everything to be broken up and merged into one large living space. The walls were reduced to a minimum. I think there will now be a radical change in how we think. We've all realised in this past year: it's nice to have somewhere to retreat to."

A long-term solution could be, depending on the living situation, to install sliding walls or partitions that separate off a space for working during the day. – dpa 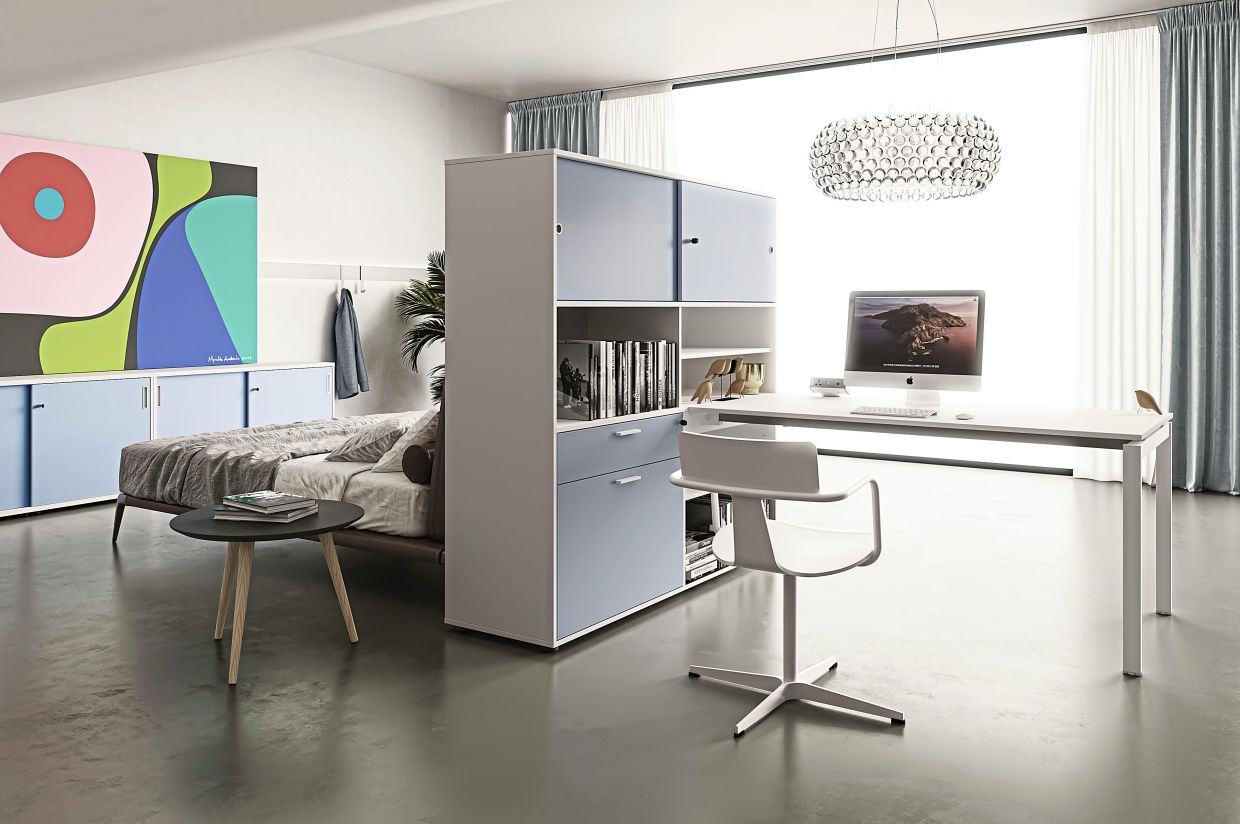 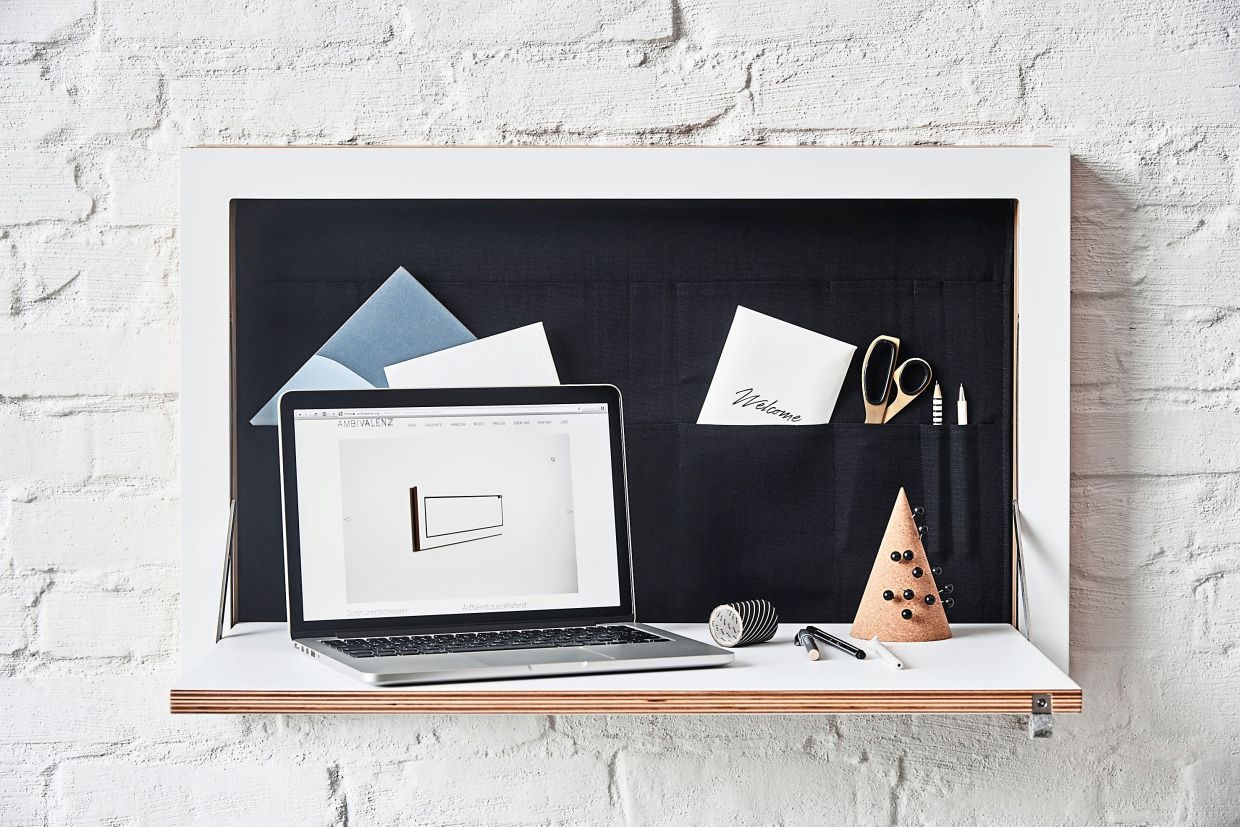 High-walled sofas and other furniture (like the modular S5000 Retreat system by Thonet) can create a room within a room. Here tables and sockets are added to turn these spaces into workplaces. Photo: Giacomo Giannini/Thonet/dpa

Think of them as side tables. The small FK12 FortyForty cubes by e15 can also be assembled into a flexible room divider. Photo: e15/dpa

This "Room in a Room" planning concept by Leicht was actually intended as a walk-in utility cupboard. But in a time of working from home, it takes on a new function: the cube integrated into the room becomes a work corner. Photo: Constantin Meyer/LEICHT/dpa

Shelves arranged in an airy way can be a room divider, but at the same time, leave a large living space with its open flair. Photo: AMK/dpa

One large room, but with separate areas: With a wardrobe in between, you can't see the cosy, beckoning bed when you're working and vice versa when you're falling asleep. Here is a room solution from the manufacturer DVO. Photo: DVO/dpa

Slim desks that fold away when you don't need them work great for the whole family in the home office and homeschooling environment. Here, for example, the Flapps system by Ambivalenz. Photo: Ambivalenz/dpa

Room dividers are a quick solution for creating new spaces – here is an example from Arper. Photo: Marco Covi & RNDR/Arper/dpa

Don't have much space at home to work in? Here's how you can work around that

5 tips for creating a workstation in small spaces For the love of birds: Backyard sleuths boost scientists' work
What we can do to prevent road traffic accidents
World's costliest city for foreign workers is Turkmenistan capital Ashgabat
Entering the workforce: Negotiating your first salary
Bitter fight for 'green gold' as gangs target South Africa's avocados
'Women build the city': Vienna's space for female architects
Tipsy-Turvy: How many different styles of beer are there?
Contradictheory: Blowing our chances to hit the reset button
Your Pet Story: Cats are not our whole lives, but they make our lives whole
10 golden rules for reforestation programmes we need to heed Premium