Cats tails send a lot of signals about the inner cat's feelings but while some signals are fairly standard, others are personal quirks.

Generally speaking, a cat will stick their tail high up in the air when they're happy and confident. If that flagpole tail is quivering, it's likely a sign that they're super happy to see you. If cats were dogs, that would be the happy tail wag.

A tail that's kept low as they approach you means they're a bit neutral or perhaps cautious. Speak nicely and don't make hasty moves.

A tail that's bushed usually means a cat is angry, or they are playing a wild game and they're pretending to be angry. Cats playing with cats adore make-believe, so just sit back and watch the fun.

A bushed tail and flat ears can also indicate a cat is afraid. So if you're in the vet, your pet is cornered, or it fears something bad is about to happen, be very careful. You may be clawed. Wait until your kitty unfluffs; this can take around 15 to 20 minutes.

A flicking tail has to be interpreted carefully. If it's just waving slowly, your pet is thinking or quietly watching something. But if it's lashing about, it usually means your pet is upset about something, perhaps becoming angry or nervous.

A tail curled around the paws as they watch you also needs to be interpreted. If their ears are up and they are chatting to you, then you can go in and pet them or be social. But if the ears are back or flat, your pet may be chastising you or signalling they want alone time.

The second I heard the meow at the door, I knew it was trouble. Swooner never comes home in the middle of the day, yet there he was.

Our middle cat is sensible, so when there are delivery people, strangers or dogs about, Swoon comes home.

But he wasn't bouncing in with his ears up and his tail at a jaunty angle and meowing at the inconvenience of random strangers. The way he trooped in silently with his ears flattened and his tail down spoke for him; our boy was upset.

Making an informed guess, I picked him up and cuddled him. "You quarrelled with Charlie?"

The headbutt confirmed it. Swooner looking sad after a fight with his bestie. — Ellen Whyte

I hugged my pet for comfort, thinking it would blow over. Charlie is 10 years older than Swooner but the two boys are like brothers. They hang out across the street at Charlie's house all day long but, like all friends, they get on each other's nerves occasionally.

Usually, there is a bit of a shouting match, and then the cats stalk off, making it clear with every dignified step that they're upset.

But an hour later an incoming distraction like a bird, a moth or perhaps a neighbourhood tom trying to enter their territory, ensures their differences are forgotten.

Charlie wasn't anywhere about and Swooner was moping, so when Tic Tac came running down the stairs, super excited to see her brother home in the middle of the day, I hoped she would cheer him up.

Tic Tac loves playing with Swooner and she's so utterly beguiling that he was soon persuaded to wrestle. They battled on the living room rug, and then went upstairs to hang out on the roof.

At the end of the afternoon when the shadows lengthened, Swooner went out, looking a bit cheerier. I looked out 10 minutes later, expecting to see him across the street. But contrary to expectations, he was hanging out at the end of our drive. Charlie was nowhere to be seen.

Now Swooner is a big cat and very macho in that he'll take down any intruder who dares enter his garden. He has also bagged a rat, so his hunter street cred is in fine form.

However, Swoon has a nervy side. It may be because he was kicked out of his birth home when he was a kitten. As he had a dislocated paw, the poor boy was unable to look after himself. When our neighbour found him, he was literally starving to death.

So while our big boy struts as though he owns the street, he is sensitive to stress. Knowing him well, I watched him hang out alone with deepening concern.

When it was time to come in for the night, I offered him extra cuddles. Swooner normally limits hugs to a minute or two. As he sat on me for a full 20 minutes, headbutting and asking for his chin to be stroked, I really felt for him.

Worried, I texted Charlie's mum. Her text winged back: that morning Swooner had cuddled her and Charlie had been jealous, hence the quarrel. It had been a quiet one, just a growl and hiss, but cats being cats, Swooner had marched out.

Like me, Charlie's mum thought it was temporary. Once the boys had slept on it, they'd make up.

But the next day, Swooner was out for a quick pee and then back at home. He lay on the floor, tail flicking as he pondered. This is typical Swoon. It's as if his brain is set to pendulum clock; it the tail wags, he's thinking.

What he was thinking of, none of us can know. He looked sad.

Thankfully, Tic Tac distracted him again, playing her best games and chewing on him the way kittens do. It cheered him up but he wasn't himself. Again, we had a whole day without sight or sound of Charlie.

When we went to bed that night, all cats piling in as usual, I realised precisely how upset my pet was when he woke me up at 3am – by peeing on me.

It's never a fun experience but it's always deeply significant. Cats pee on humans from sheer terror, a physical illness, to claim their human as their territory, or from mental distress.

So I wasn't even temporarily annoyed. All I felt was pity for my poor boy. I had a quick wash, found Swoon luring sadly in the office, and gave him a cuddle. Then I took him back to bed, tucking him under my arm and rubbing his ears.

He stress-purred for a while, a breathy, racy sound, but it slowed down as I talked to him. Fussing worked. The tense body soothed, the agitated tail flicking slowed down and the restless sound settled into a proper deep purr.

We cuddled for about an hour, with me whispering silly nonsense in his ear as his face tucked into my neck. Gradually, his tail flicked slower and slower, finally stopping as he dozed off.

The next morning, I put out breakfast, watched Swooner eat and then let him out. Seeing him settle on the doorstep, I resolved it was time to put an end to the fight. I was getting dressed properly and planning to put the two boys together over two plates of our finest tuna when my phone buzzed.

Picking it up, my heart skipped a beat: it was Charlie's mum saying Swooner was over for breakfast. The text was followed by a badly lit super fuzzy snapshot of the two boys munching away.

It was too dark to see clearly but I knew all was well: Swooner's tail was straight up in the air. 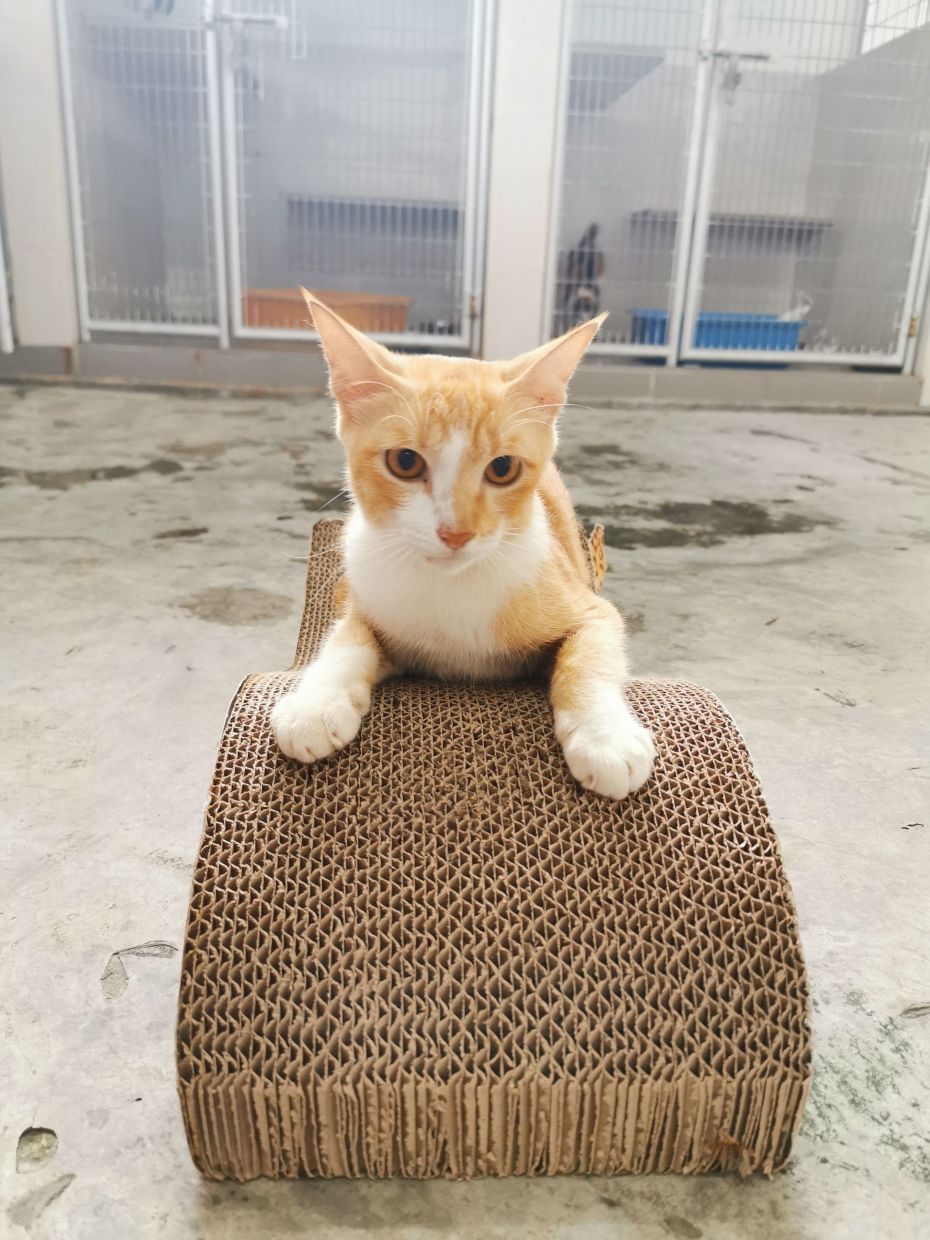 Mango is still a baby at nine months but she's spayed and vaccinated. This sweetheart is friendly and loves to be cuddled. Mango would make an excellent companion cat if you're working from home. Interested adopters please contact SPCA Penang, Jalan Jeti Jelutong, Jelutong, 11600 Jelutong, Penang or call 04-281 6559.

How to teach your cat table manners

WWII weapons bunker now houses a scientist’s insect collection
This Copenhagen eco-district is rising to an unprecedented challenge
Dear Thelma: I feel guilty about breaking up with my ex-girlfriend
Climbing temperatures have wrought major changes to ocean stability faster than previously thought
Amsterdam unveils its largest bike garage, and it's underwater
INTERACTIVE: Funny bunny facts for the Year of the Rabbit
Russia's conflict diamonds: Who profits most from the ongoing trade?
Ukraine's Odessa wins Unesco status despite Russia opposition
Graves sink and fisheries shrink as a result of climate change in Fiji
Venice of Africa threatened by severe flooding due to climate change