Ghost was living in a stray colony. — Sharon Bakar

A house isn't a home without a cat, and when you are blessed with three furries, life is very good indeed. Looking at our brood last week, we were celebrating our luck and thinking over how they came into our lives.

We adopted Target from a rescuer but Swooner turned up in the street, and Tic Tac was handed to us by our neighbour. It prompted a question: how do people meet their pets? 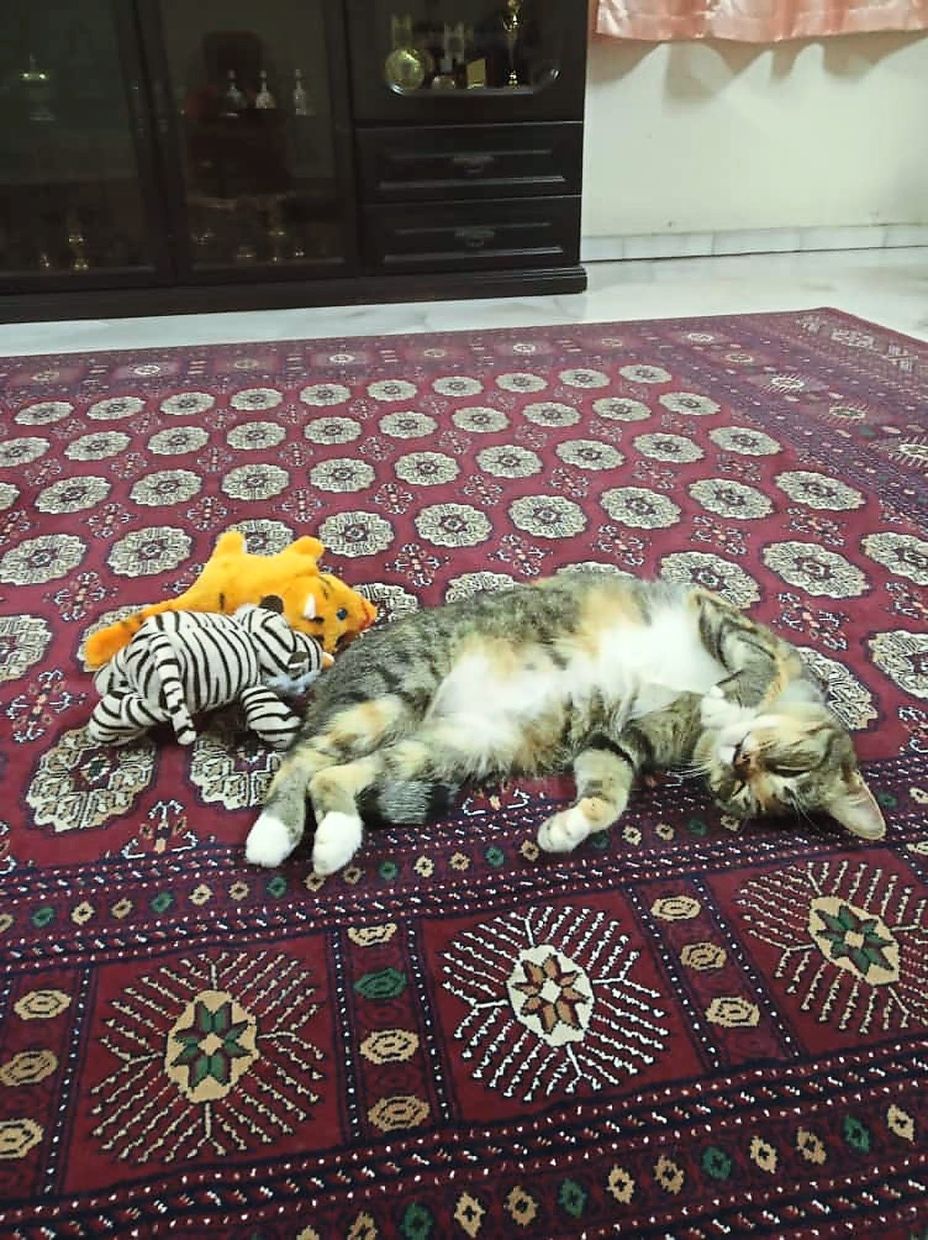 "Four years ago, a kitten turned up on our doorstep," Hawa Abdullah Ibrahim, an English lecturer at a teacher's training college in Johor Baru, recalls. "As it was hairless and less than two months old, we thought it had been abandoned by the mother. We had too many cats already so we fed her but kept her outside the house.

"Two days later, there was a thunderstorm. We discovered the kitten had climbed into an umbrella that was hanging up to get away from the wet. Seeing it, my husband took pity and decided we could adopt it.

"We thought the kitten was a boy so we were going to register it as Mamat. That's when we found it was a girl. So we called her Bedah, nicknamed Bed.

"Bed remains an extraordinarily clever cat. About a year after she moved in, we came home one night to find her dragging something over from the back compound. It was dark but she was determined to show us something. When my husband took a closer look, he realised she'd killed a python – and it was bigger than her!"

"Tigger Miow was born in September 2011 under my staircase," Loh Lay Peng, business owner and cat activist in Penang, shares. "There are always strays and so I thought I would neuter her and put her back. But after living with her for a week, I released her and found myself running after her. She didn't want to go back either, so I scooped her up and took her back home.

"She's a special cat and very clever. When I let her out in the morning, she wanders through the apartment, follows my kids for their baths, and drinks from the running tap. Afterwards, she'll pee in the sink. We didn't teach her; she taught herself.

"She's also a hunter. When she spots a lizard, she will jump up the wall. Sometimes she gets stuck and we have to help her back down! Her other skills include hiding. Tigger Miow can get into a cupboard or drawer, slide in between things and be totally invisible.

"The only drawback to her hunter skills is that she scratches the sofas. We’ve told her it's not what we want, but it's in her nature. I should maybe be more upset but she's my special cat."

The cat with two homes "Garfield just turned up at the house a year ago," Farida Wan, a retiree in Petaling Jaya, says. "He was probably a year or so in age and as he looked well and had a collar, we thought he was a pet. I noticed his collar was tight, he let me loosen it and he was affectionate, but not going anywhere. He wasn't neutered, and I wondered if he was after a girl cat.

"He was quarrelling with my cats because he wasn't neutered. After two months of that, I got him fixed and invited him to stay.

"But when I got him a new collar, he went for a walk and came back without it! So I put on his old collar, and he came back with two collars!

"I think he must have an owner but he's decided to move in with us. He sleeps on my bed at night and goes out for his daily walks but he doesn't go far. He's still fat, and lazy with it, therefore we call him Garfield. People keep asking, when will he deliver?"

"She made a beeline for my husband the first time she saw him. Over the weeks, we got to know her. She was very friendly, and would come running to greet us. Sadly, some of our neighbours don't like cats. They were hassling the management to get rid of them.

"We were worried about Tot because she was getting bigger. We thought she was pregnant. As we were down to three cats, we thought we'd take her in, make her comfy during her pregnancy and get homes for the kittens.

"Tot moved in but, a week later, she was sitting on the sofa and we noticed a little bit of blood. She was spotting.

"When we took her to the vet, an ultrasound showed she wasn't pregnant. We still don't know if she perhaps miscarried or whether there were other issues. We had her spayed, and from that moment, she's been healthy.

"Tot likes me but she is my husband's shadow. It doesn't matter what he's doing; she's right with him. And when my third son visits, Tot plays wild acrobatic games. It's not like she's a middle-aged lady at all. She also loves to be tickled by my youngest son's girlfriend.

"She's a sweet cat and we really enjoy having her."

"When we were still in the city, I'd feed a colony of strays," Sharon Bakar, creative writing teacher based in Nilai, shares. "About three years ago, at Halloween, this little shape darted out of nowhere.

"I screamed and she screamed, too. When I looked again, I saw she was an orange and black kitten, exactly the right colours for a Halloween scream queen. So, I called her Ghost.

"She was tiny and she's remained small. I think it's because she was underfed as a kitten. Now that she's grown up, she's still retiring and quiet. She loves to sit on my lap for hours every morning as I'm reading. But while she's mostly just Being, she just adores chicken. It gets her all excited!" 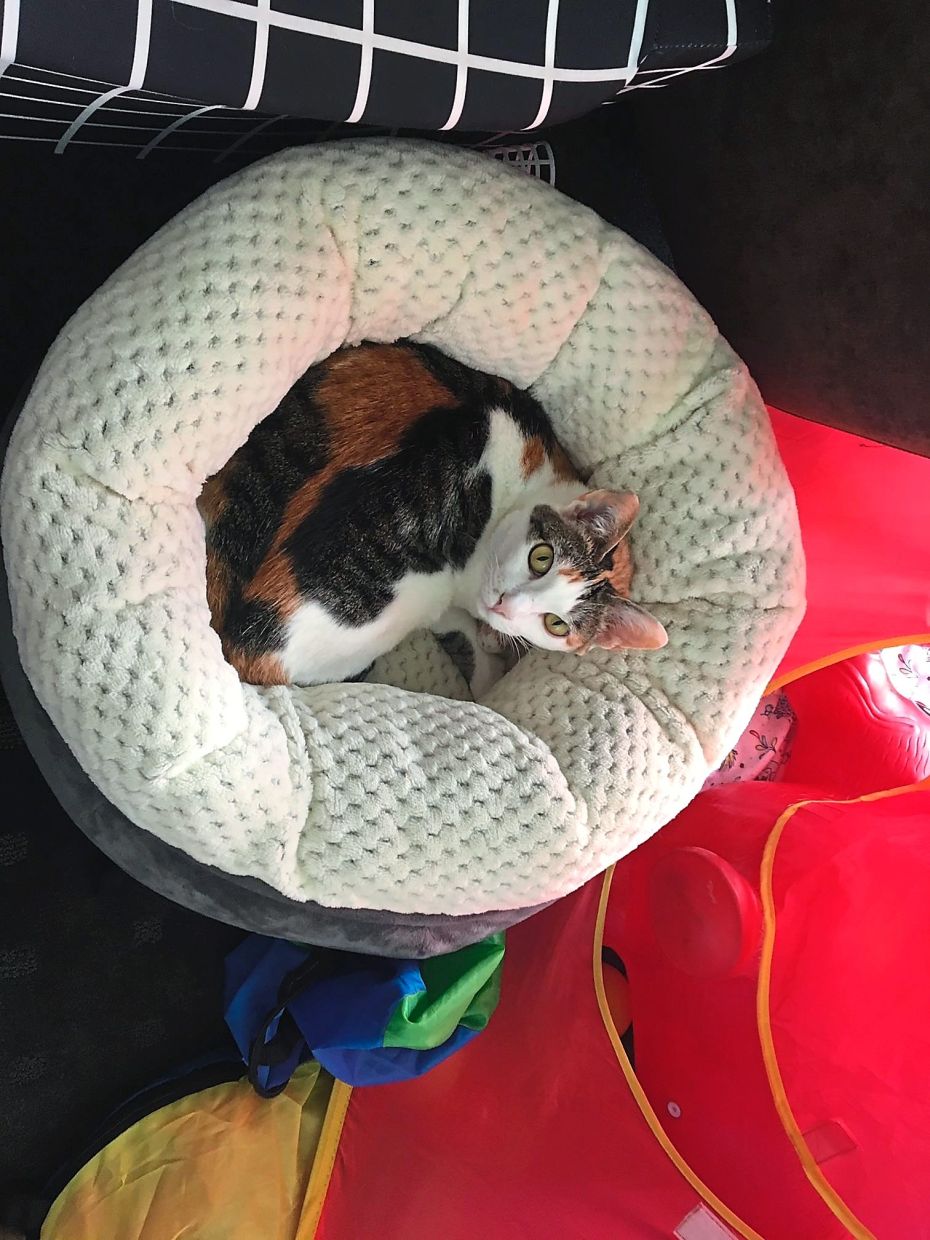 Nutmeg was found in a dumpster. — Sharlene Phuah-Giddens

"Five years ago, I walked past a dumpster in SS14, Subang Jaya, and heard meowing," says Sharlene Phuah-Giddens, a Malaysian mum now living in Australia. "There was a tiny kitten, really small. Her eyes were open but she looked less than two weeks old. I thought mum would be near, so I went about and did my shopping.

"An hour later, when I walked past again, the baby was still there, distressed and there was no sign of mum. When I checked the area, there were no other cats or kittens nearby. With her being in the dumpster, it looked like someone left it there.

"Years before, one of our cats turned out to be a less-than-stellar mum, so we knew about kitten formula, special droppers and so on. So, I took the kitten home.

"Today, Nutmeg is all grown up – and she's living in Australia. We moved here 18 months ago, with Nutmeg and our other cat, Garlic. The first winter was a bit of a shock but Nutmeg has grown a thick coat, and she's very good about curling up in all the warm spaces in the house.

"She adores Maya, our seven-year-old daughter, who is very gentle. She likes our son Caleb, four, but he's still young so he can be a bit rough. But she's not sociable with visitors. When we have company, she hides."

So many stories, and so much love. If you can offer a cat a happy home, do consider adopting.

Tips for adopting a stray

Kitties who've been living rough are usually run down. Also, as living wild is difficult and dangerous, they are often tired and stressed.

To get them into good shape, mentally and physically, they need patience, love, lots of rest, clean water and very good food.

They should also visit the vet. During the first examination, your new pet will probably get a deworming tablet, some spot-on flea medication, and ear mite checks.

If they are in reasonably good shape and old enough, you may be able to schedule a vaccination or neutering.

However, if the kitty isn't very robust, you may be told to let the little one rest and grow stronger for a week or month first. You can expect an upset tummy for the first week or so. This may be stress-related, come from scavenging rotten food or just from the change to a good diet.

Keep your cool and make sure your pet has several small meals rather than two large ones. Also, provide lots of clean fresh water. And most of all, just be happy together. Spike is up for adoption. Photo: Lily Leng/SPCA Penang

Spike is a year old, neutered, vaccinated and healthy. This incredibly handsome boy is a cuddle bug. He loves to be petted and stroked! If you're looking for a sweet companion to adopt, please contact SPCA Penang at Jalan Jeti Jelutong, Jelutong, 11600 Jelutong, Penang (tel: 04-281 6559). Or visit https://spca-penang.net

How 6 cat guardians met their pets 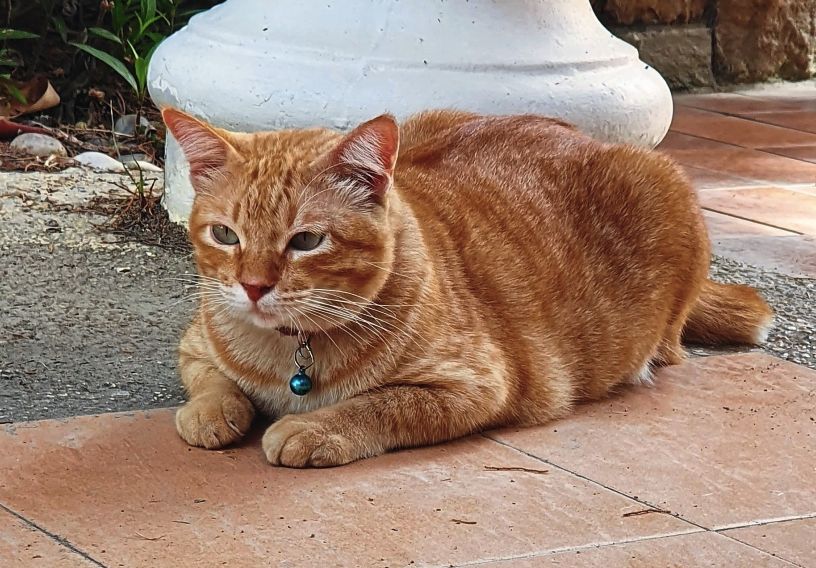 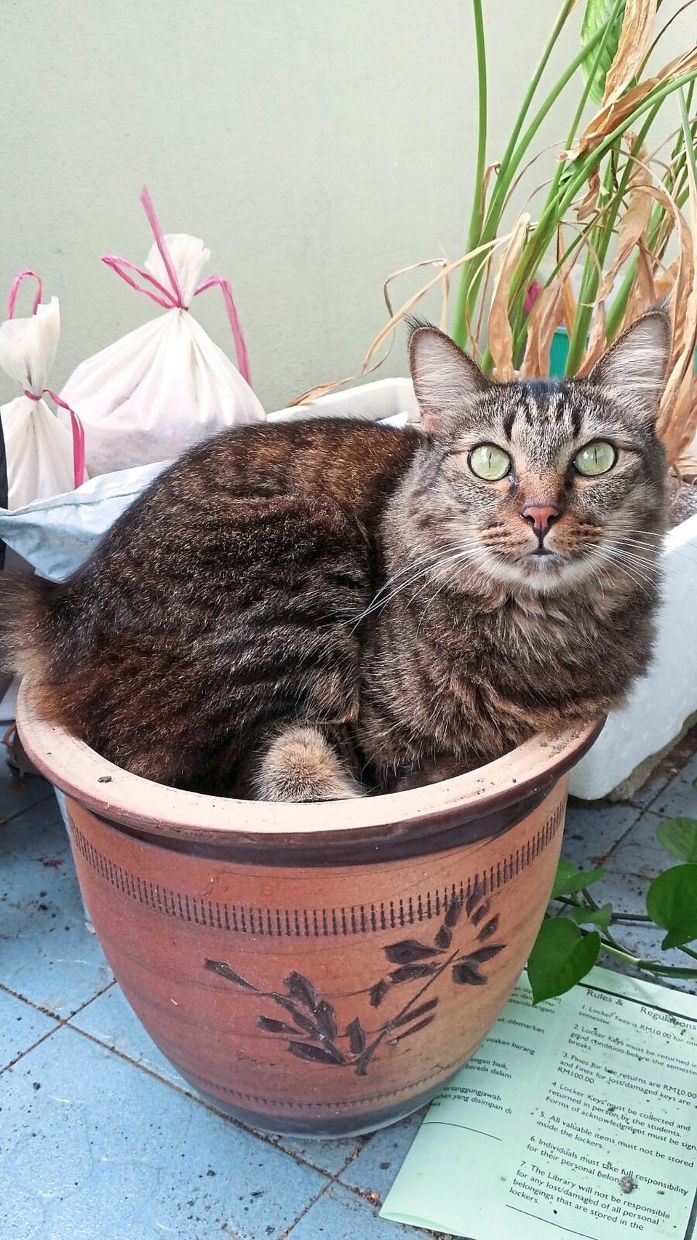 Ghost was living in a stray colony. — Sharon Bakar

Spike is up for adoption. Photo: Lily Leng/SPCA Penang

Tigger Miow was born under the stairs. — Loh Lay Peng

Nutmeg was found in a dumpster. — Sharlene Phuah-Giddens

Tot was born in a car park. — Rowena Yap

Bedah killed a cobra as if to say thanks to her new owners. — Hawa Abdullah Ibrahim

When Harry the hummingbird met the Sallys