When Harry the hummingbird met the Sallys

It was the beauty and fragility of hummingbirds that drew Rena Warmath to them.

The 64-year-old medical records analyst works from home – in Connecticut, the United States – where she loves watching the birds while sitting at her desk.

“We live in a very wooded area on a dead-end road, so we do have a lot of wildlife. We even have coyote up in the woods. We live over the hill from the Naval Submarine Base and when they play the Retreat at dusk, the coyote join in like a symphony!”

Though surrounded by a great variety of birds, Warmath has a special love for hummers.

“I enjoy the hummingbirds for several reasons. One, they’re so delicate and beautiful... they are amazing little creatures! Two, the feeder is on our back deck so when we’re in our kitchen and dining room, we watch them. I guess the convenience of their location makes it easy to watch them. One of the Sallys at the sugar feeder.

“The other birds and the squirrels are in our side yard, so we enjoy watching them from our bedroom windows. Even though we’re not in the bedroom much during the day, I do like to sit by the window and watch them a couple of times a day.

“I love the sound that their wings make, and they do actually make chirpy noises when they sit in the trees.

“I love that sometimes when I remove the feeder to clean it and replace the sugar water, they perch on the hook and wait for me to come back. And once I put the feeder back on the hook, one of them immediately perches on the feeder to drink. I love watching them chase each other from one side of the yard to the other, and through the trees.”

Warmath describes herself and her husband Ed Parchaiski, 76, as “snowbirds” – northerners who move to a warmer southern state in the winter.

“We have an RV (recreational vehicle) and live in Florida from Nov 1 through April 30. When we arrive back in Connecticut, the hummingbirds usually show up about a week later. I have seen on my town FB page that the hummingbirds start showing up around mid-April, ” she relates.

One day, her husband found a hummingbird on the ground, which he thought was dead.

Placing him in a dustpan, Parchaiski brought him up onto the deck where his wife could look at him. (They would later name him Harry.) “Harry’s eyes were closed and he was very still. I watched his chest and thought I saw a teensy breath. So I picked him up and quietly held him in my hand. I was rubbing his body and saw slight breathing movement.

“Then we thought that maybe some sugar water would help him, so hubby got a bottle cap of sugar water and I gently dipped Harry’s beak into the sugar water.

“The response was amazing. It took a while, but as he sipped the sugar water, his breathing grew stronger, his eyes opened and he slowly raised to a sitting position. We continued this for about half an hour and then I took him over to the feeder and he flew off! The whole process took about 45 minutes, and it was amazing to watch him revive.”

Two female hummingbirds came onto the scene not long after, around the first week of May.

“Sally 1 arrived shortly after Harry. Harry has bright green feathers and a red underbelly; he’s the one we saved.

“Sally 1 and Sally 2 are duller in colouring. I realised that there was a Sally 2 when I posted (on Facebook) about Harry being selfish with the sugar feeder. All of a sudden, there were three hummingbirds instead of two. I probably didn’t realise there have always been three, because Sally 1 and Sally 2 look alike and I’ve only seen one at a time!” quips Warmath. Harry keeping a lookout at the sugar feeder in Rena Warmath's home.

Harry’s recent attitude could be described as aggressive, cheeky, playful and dominant.

“He sits on his perch and constantly looks around for the Sallys! When one or both of them come over to drink, he dive-bombs them immediately. Harry drinks at times but when he’s sitting on the perch, he’s guarding ‘his’ feeder. I don’t think he’s being playful with the Sallys... he really doesn’t want them to use his feeder!” says Warmath.

“Even though Harry is selfish about the feeder, I think that all three really do enjoy buzzing around after each other. I just really enjoy watching them feed and play.”

“All I do is replace their sugar water every week, so that mould doesn’t form in the water. I make the sugar water with a 4:1 ratio of hot water to sugar. I just make sure that the sugar is fully dissolved, and then I refrigerate it before I replace the old with the new.

“We also get bees and ants around the feeder, so while I’m cleaning the feeder, hubby sometimes sprays the hook and railing to keep the ants and bees away. I wait awhile before I put the feeder back so hummingbirds aren’t affected by the spray.”

In addition to the birds, there are also squirrels and chipmunks that come to feed in their yard.

“I have a squirrel-proof bird feeder and suet feeder. The suet feeder is designed to keep the squirrels out by enclosing the feeder in a cage. But the cage had such small holes that the birds weren’t going in. So I cut some of the holes to make the entrance bigger, and now the birds go in to eat the suet... but so do the squirrels!

“I’ve caught the squirrels more than once squished inside the cage, and when they see me, they go crazy trying to find the entrance so they can get away! I also have a squirrel feeder, so don’t think that I’m starving them!

“This year, I spotted some orioles, so I put an oriole feeder out, with oranges and grape jelly in it. There was a male and a female oriole and they loved the feeder. I think they have moved on, as I haven’t seen them around for a couple of weeks.

“We have a male and a female cardinal as well. They feed on the regular bird seed. I have a special place in my heart for them. It’s said that cardinals are messengers from the departed. My parents are both deceased, and it seems that whenever I’m having a tough time, a cardinal appears. I believe that these are messengers from my mum, reminding me that she’s present in my life always, ” Warmath says.

“In the past, we’ve had other pets. We had five cats at one time, each with its own unique personality. We lost our beloved boxer, Emma, three years ago, at the age of 12. She was our baby and she travelled with us everywhere.

“After she passed, we decided that we were getting too old to own another dog, mainly because we were afraid of what would happen to our pet if something happened to us... no one could spoil our pet like we did!” Rena Warmath with her ‘baby’, Emma the boxer.

Hummingbirds and other creatures in Rena Warmath's garden 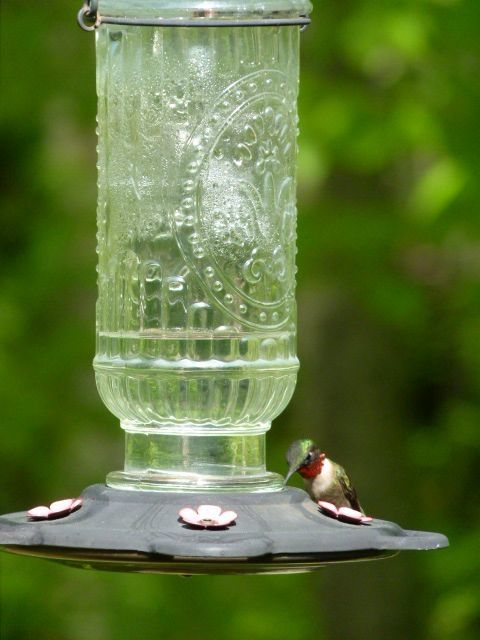 One of the Sallys at the sugar feeder.

Rena Warmath with her ‘baby’, Emma the boxer.

A pair of sparrows and a downy woodpecker getting a nibble at the bird feeder in Rena Warmath's home.

Harry keeping a lookout at the sugar feeder in Rena Warmath's home.

Harry relishing the sweet liquid at the sugar feeder .

Group sues to stop Connecticut aquarium from getting beluga whales