Earthquake isolator is a Malaysian innovation

By K. PARKARAN
Photos By Malaysian Rubber Board 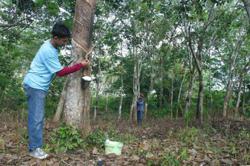 The rubber quake isolators in place on the Second Penang Bridge.

How many of us happen to know that our very own scientists are behind the creation of rubber bearings that protect buildings and bridges in many parts of the world? Not many, I am sure. Yes, behind these innovative creations are our scientists from the Malaysian Rubber Board (MRB), formerly known as the Rubber Research Institute of Malaysia (RRIM).

Besides the Sultan Abdul Halim Muadzam Shah Bridge (Second Penang Bridge) and a few buildings in Malaysia, earthquake-prone countries like Indonesia, Japan, New Zealand, China and Chile have incorporated these bearings as base isolation for quake protection.

The MRB’s high damping rubber bearing is among many of MRB’s own downstream innovations that have helped boost the upstream industry which has seen declining local rubber and latex production. 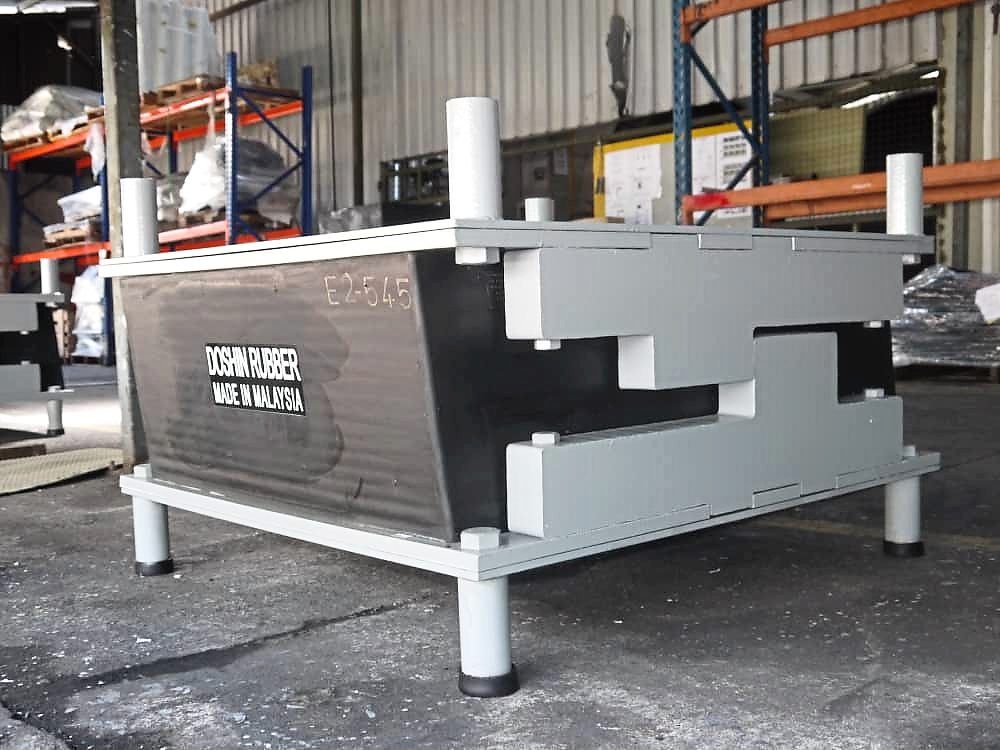 A close-up of a Malaysian Rubber Board quake isolator before installation.

MRB Director-General Datuk Dr Zairossani Mohd Nor said the success was a result of collaboration between the Board’s UK-based Tun Abdul Razak Research Centre (TARRC), formerly known as the Malaysian Rubber Producers’ Research Association (MRPRA) and a professor from the Civil and Environmental Engineering Department of the University of California, Berkeley.

“The feasibility of using natural rubber for protection of structures (buildings and bridges) from earthquakes started back in the 1970s. Studies and experiments were carried out in the laboratory of the university using the simulation facilities on-site," said Datuk Dr Zairossani.

“Large-scale tests were carried out using the rubber bearings made from Malaysia. Subsequent funding from the United States' National Science Foundation allowed for larger and more realistic models to be constructed and tested, and finally demonstrated that the use of natural rubber bearings for earthquake protection is feasible and cost-effective.”

Here, Dr Zairossani paid tribute to the Malaysian Rubber Export Promotion Council (MREPC) for its sterling role in assisting the promotion of Malaysian-made seismic rubber bearings on a global stage. “They were crucial in getting the countries abroad to use our product, ” he said. According to Datuk Zairossani Mohd Nor, the rubber quake isolators are among some of the board’s creations that have had a global impact.

Explaining how they came up with the bearing, Dr Zairossani says the first building in the world to use rubber cushions for earthquake protection dates back to 1965, adding that the Pestalozzi primary school building in Skopje, in the former Yugoslav Republic of Macedonia, was constructed on rubber blocks to prevent the earthquake energy from being transmitted to the building.

“The rubber blocks used in this building were unlike modern rubber bearings, i.e. they did not have reinforcing steel plates in them. As a result, this technology did not work very well because these rubber blocks have altered the vibration frequencies of the building to be similar in the vertical and horizontal directions, causing the building to bounce and rock back and forth during earthquakes, ” he said.

In addition, he said, due to the lack of steel reinforcing plates, the rubber blocks bulge sideways under the weight of the building.

He said, to overcome this setback, steel plates were introduced in the rubber bearings (laminated rubber bearings). “The alternate layers of rubber and steel make the bearing more stable under the weight of the building, without compromising the horizontal property required to provide sufficient protection to the structure during earthquakes (horizontal shaking). Combo image showing (clockwise, from top) the Second Penang Bridge; one of the rubber quake isolators before installation; and the isolators mid-installation.

“This technology of using high damping rubber bearings for earthquake protection was not patented when it was first invented. However, subsequent research and development work around the world has resulted in numerous patents being filed in various aspects.”

Dr Lee Jiang Jun, one of MRB’s senior scientists who was among key personnel in the creation of this earthquake isolator, said structures can be protected from earthquakes using various techniques – one of them is base isolation, which separates the structure from the ground shakings through the dynamics of the structure to protect not only the structure but also the contents of the structure.

“Of the various techniques in earthquake protection of structures, base isolation is the only technique that can protect both the structure and the contents inside. As a result, this technique is extremely important for critical structures such as bridges, hospitals, emergency centres and schools." 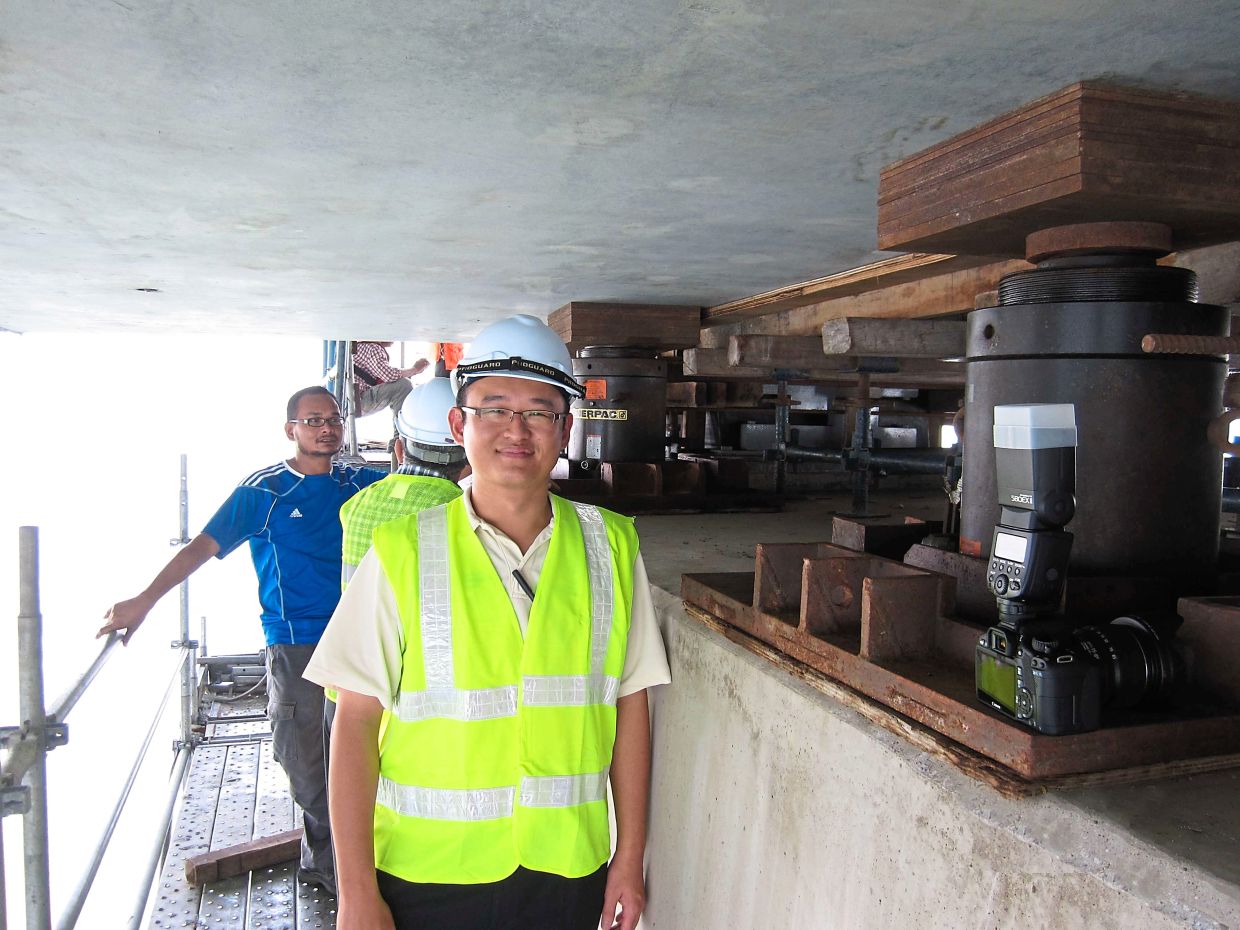 Dr Lee Jiang Jun is one of the Malaysian Rubber Board’s senior scientists involved in creating an earthquake isolator used around the world. Here he’s on site at the Second Penang Bridge during the installation of the isolators.

“As a result, several demonstration buildings were constructed, including a small four-family housing block in Santiago, Chile, an eight-storey condominium in Shantou, China, and a four-storey reinforced concrete demonstration building in Pelabuhan Ratu in West Java, Indonesia. These buildings were the first in their countries, which then further promoted the use of this technology, ” he added.

In Malaysia, he said, there are currently three structures constructed using the technology of high damping rubber bearings. The first one is a three-storey office building in Lahad Datu, Sabah, belonging to the Malaysian Palm Oil Board – its Lahad Datu Research Station, built in the early 2000s. Located next to it is another building that's identical but built without using rubber bearings.

“These buildings were instrumented to record their response during earthquakes. The base isolated building sits on 28 pieces of high damping natural rubber bearings produced and tested in the MRB Sungai Buloh Research Station, ” said Dr Zairossani.
Dr Zairossani said the first commercial project in Malaysia using this technology was the Sultan Abdul Halim Muadzam Shah Bridge. This project was initiated in the early 2010s with the involvement of MRB as the consultant for the design and development, manufacturing and test supervision of the earthquake bearings.

“In mid-2010, a 10-storey serviced apartment in Langkawi, Kedah, was constructed. This building is owned by MRB and sits on 31 pieces of high damping natural rubber bearings designed by MRB and manufactured by a local manufacturer, ” he said. 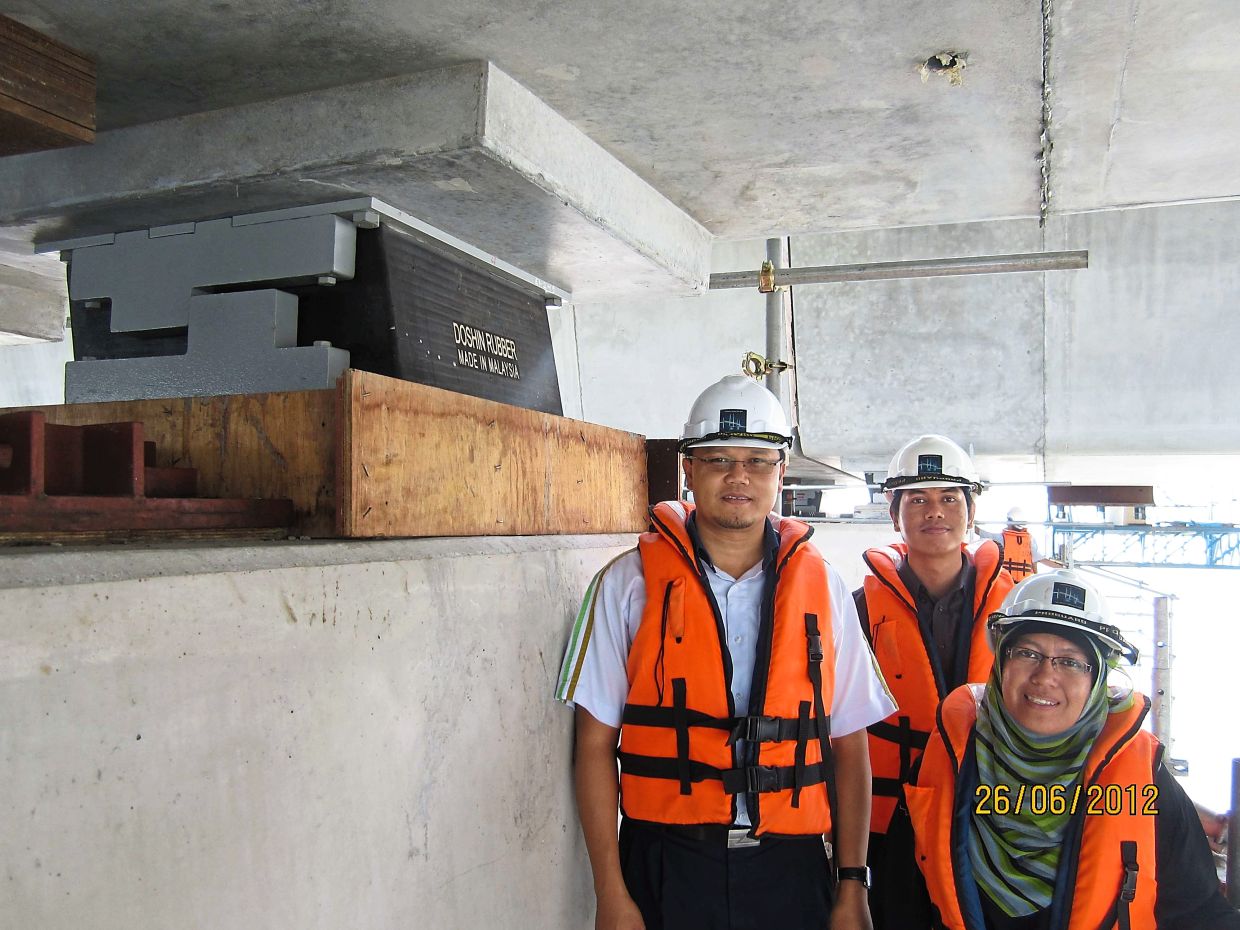 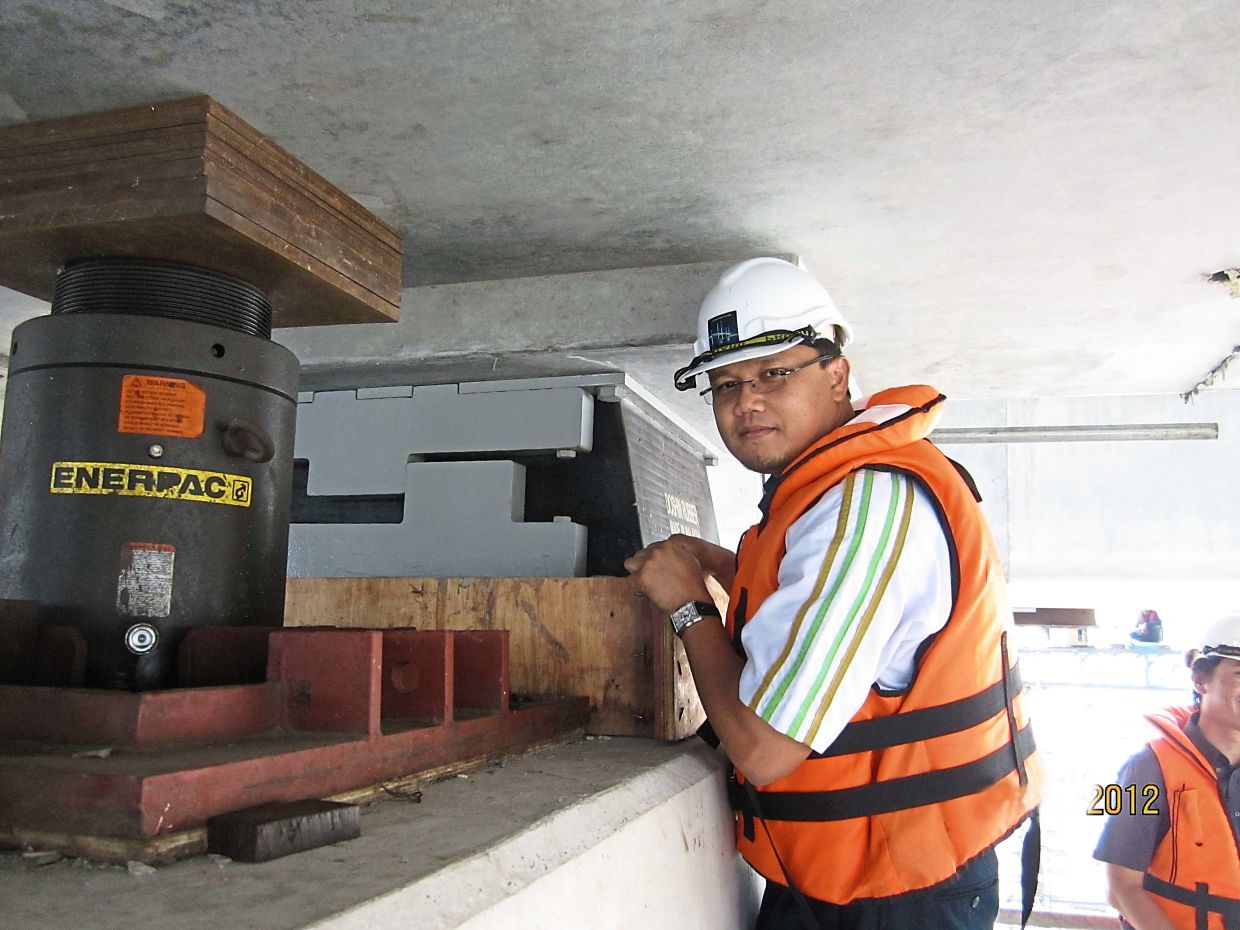 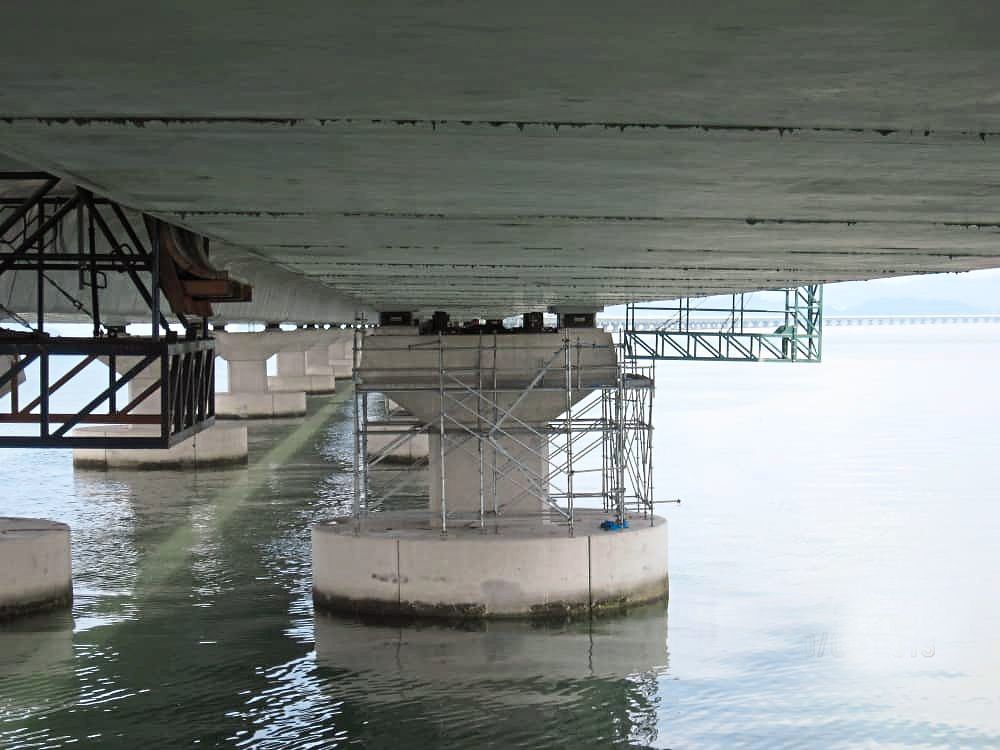 The rubber quake isolators in place on the Second Penang Bridge.

Current Malaysian Rubber Board director-general Datuk Zairossani Mohd Nor (left) with MRB scientist Dr Nazirah Ahmad (right) and a team member (centre, back) on the Second Penang Bridge during the installation of the quake isolators.

Dr Lee Jiang Jun is one of the Malaysian Rubber Board’s senior scientists involved in creating an earthquake isolator used around the world. Here he’s on site at the Second Penang Bridge during the installation of the isolators.

Malaysian Rubber Board director-general Datuk Dr Zairossani Mohd Nor checking out one of the isolators on the Second Penang Bridge during installation.

Combo image showing (clockwise, from top) the Second Penang Bridge; one of the rubber quake isolators before installation; and the isolators mid-installation.

A close-up of a Malaysian Rubber Board quake isolator before installation.

According to Datuk Zairossani Mohd Nor, the rubber quake isolators are among some of the board’s creations that have had a global impact.

One of the rubber isolators being installed at the Second Penang Bridge.