Not just a soup kitchen, Pit Stop wants to empower their clients to get back on their feet

It started out personal.

Unfulfilled by their corporate jobs and stressful days, Joycelyn Lee and Andrea Tan were both looking to add more meaning to their lives. Their search led them to the streets of Kuala Lumpur where they listened to the stories of the many street dwellers they met.

“Have you noticed that once you make an overture and ask a few questions, most people tend to start talking? I’m not by nature the most sociable person, but when you’re sitting in front of a 24-hour convenience store, chugging down cold water and snacking on mystery meat and someone looks at your food and water hungrily ...

“It opened my eyes ... so I let them talk and I found their stories fascinating,” says Lee, a former journalist and communications consultant.

The stories they heard stirred the two women into action: they set up the Pit Stop Community Café in Kuala Lumpur, a social enterprise that aims to tackle urban issues, including homelessness and urban poverty and empower the people they work with.

At the heart of the enterprise is the cafe, located in Jalan Tun H.S. Lee, that’s open six days a week.

During the day, the Pit Stop is a commercial kitchen that prepares meals for their growing catering business which specialises in Peranakan cuisine.

In the evenings, the café’s dinner service caters to the less fortunate – the homeless and destitute who cannot afford a meal. The cafe serves between 350 and 400 portions of food a day and clients are given the choice to “pay whatever they can”, if they can, for a meal. 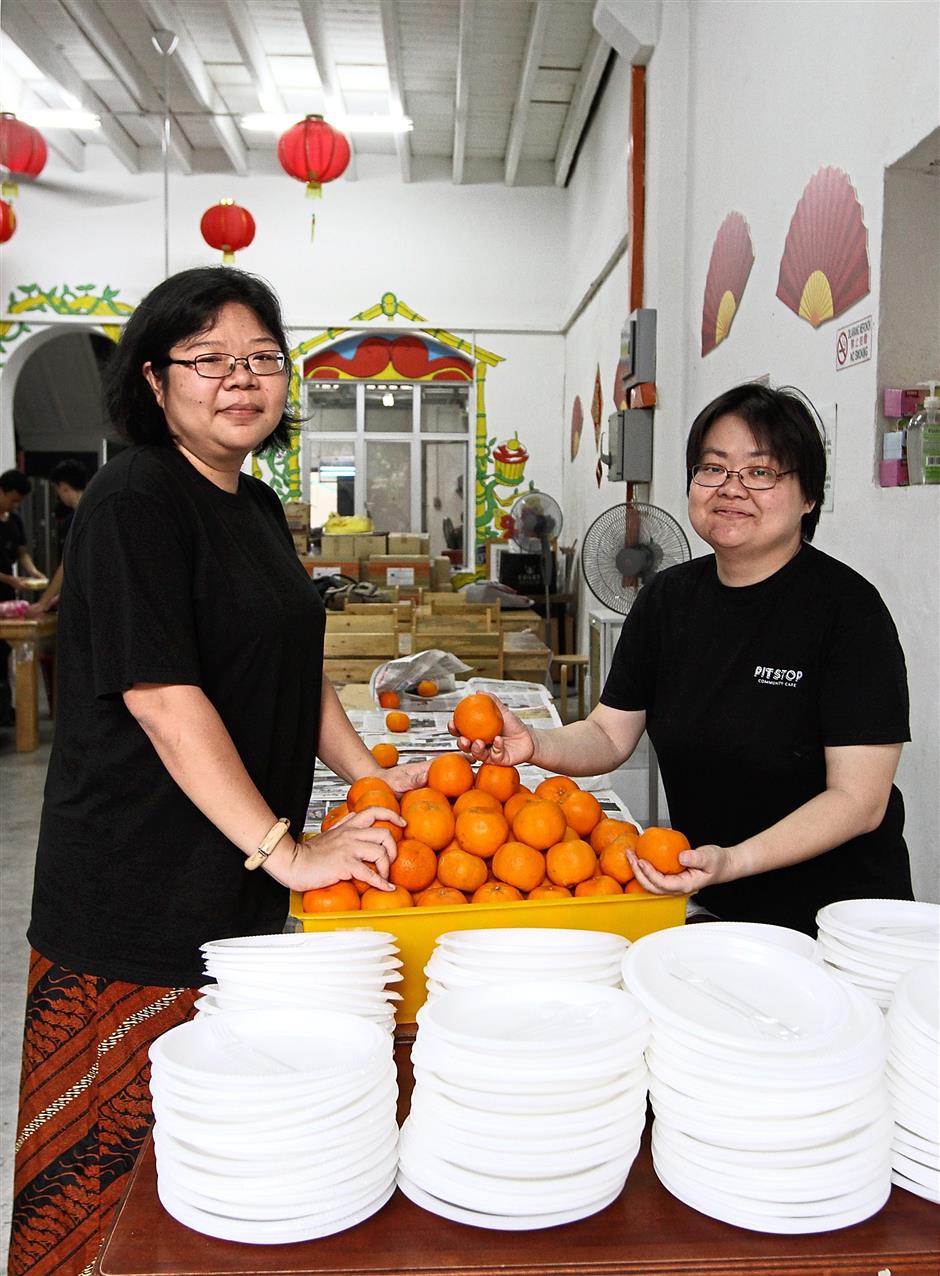 As much as Lee (left) and Tan hope to empower their clients, they find themselves nourished by the many that step into Pit Stop. Photos: SAMUEL ONG/The Star

But Lee and Tan are quick to point out that Pit Stop is more than a soup kitchen. They also aim to empower their clients to get back on their feet.

It’s a place where people can refuel and move on, hopefully healthier, happier, stronger and more importantly, empowered.

“Growing up, I was always cautioned that if I didn’t study hard, I’d grow up to be like ‘these people’. But years ago when Joycelyn dragged me on her walkabouts, I began to see the bigger picture.

“We really wanted Pit Stop to be a cafe where people who have little opportunity can come to ... where they can regain dignity and experience humanity,” explains Tan, also a former writer.

Lee adds: “The worst thing isn’t not having food. It is not having dignity, not being treated like a human being. Here, at the Pit Stop, it doesn’t matter who or what you are. We see you.

“We call you by name, by honorific – uncle, aunty, abang, adik, kakak. And when you come for dinner service, you’re not just given a pack of food – you are given the power of choice. Volunteers are told to ask them what they want ... porridge, red bean, green bean, oatmeal, mix?

“We’ve seen some of them choose some really strange mixes – we have one uncle who will always mix his red and green beans, and another who mixes his vegetable stew with oatmeal. But the point is this – they chose it.”

The Pit Stop Community Café has been operating for about two years and has quickly become a refuge for those seeking a second chance. They are known to their “street clients” as “tempat bubur” or “kafe peluang kedua”. 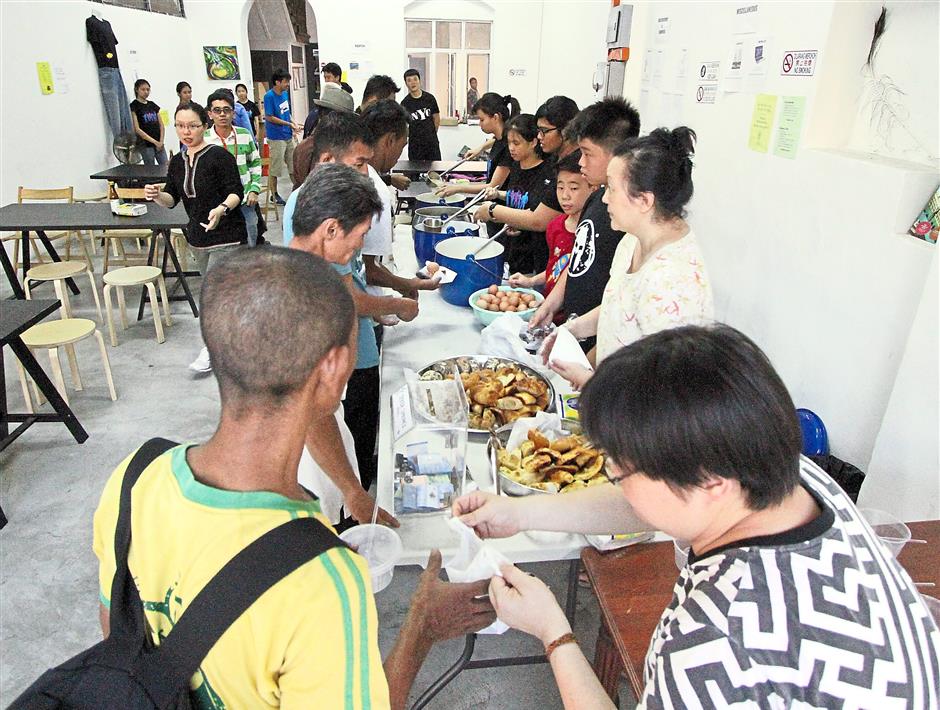 It isn't just their street clients that find comfort in Pit Stop; it's also the volunteers that serve in the cafe. Photo: file pic

“We saw a need for skills training. And since we’re involved in food, we decided to focus on what we knew best,” explains Lee.

“After the six-month programme, we do an evaluation to gauge the students’ specialisation. We currently have one trainee specialising in Peranakan, Chinese and Indian cuisine and another in baking.

“We’ve had a lot of ups and downs. Many of our previous trainees grew up with trauma or are still dealing with addiction issues, which is why we also built in counselling sessions,” shares Lee.

Pit Stop also collaborates with non-profits like Kechara and Food Aid Foundation to run a food rescue programme where they source “not pretty” vegetables from wholesalers and use them in their kitchens or distribute them to beneficiaries to reduce food waste. Pit Stop rescues between two and three tonnes of food a month.

Their food rescue and lunch sales and, most recently, their catering services, help fund their programmes. But funding remains the biggest challenge in sustaining Pit Stop’s mission.

“When we first started, we were told it would never work, because people are just not that generous. Well, almost two years on, we’ve proven them wrong. Malaysians have heart, are generous, and do care and that they just want to have opportunities to give back.

“Having said that, it’s still an uphill struggle – some months like during Ramadan, Christmas and Chinese New Year, people feel more generous, we see more sponsorships. Other months, not so good. 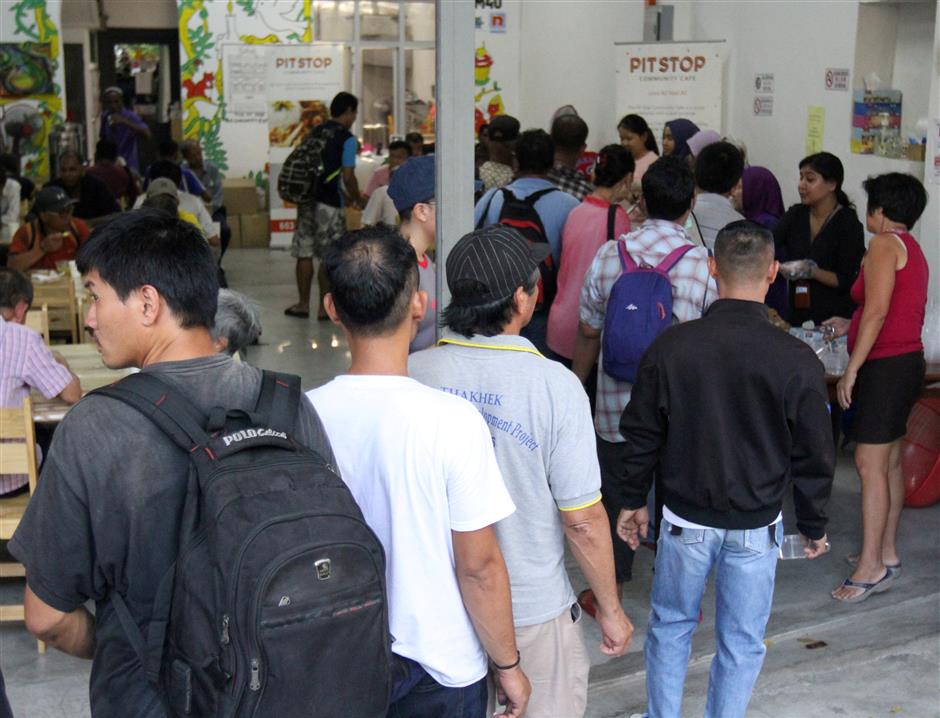 Apart from their dinner service for the homeless and disadvantage, Pit Stop runs a culinary apprenticeship programme for disadvantaged youth and a food rescue programme to reduce waste.

“We are not backed by any large corporations but we hope someone or a company will throw a pickup or a truck our way soon, so we can rescue more food,” says Lee.

They hope to expand their culinary programme too and are hoping to enrol paying students to subsidise their underprivileged trainees.

Manpower is another challenge. The core team behind Pit Stop is Lee, Tan and their chef Neoh Kean Soon (a cook who used to be one of their street clients) and a handful of regular volunteers.

This includes Pranay Prem, a 16-year-old student who started volunteering more than a year ago and now manages their website.

“We would be nothing if not for our regular volunteers. Interestingly enough, more than 80% of our regular volunteers are women. And we have some amazing women, Wonder Women in their own right, professionals with careers, who now juggle their responsibilities at the Pit Stop with their careers,” says Lee.

The place to be

Their days are still hectic. Finding new ways to sustain their social enterprise and help their clients is hard work but Lee and Tan reckon that they have found the meaning and fulfilment they were looking for in the people that wander into Pit Stop.

“On the fifth day we were open, a young street kid came up to me and asked if she could adopt us as her family because we were the first group of people who have not raised a hand in anger at her.

“She named us – I became Kak Long, Andrea became Kak Su. I did not realise how important this was to her, until the next day. She dragged a few of her friends by and introduced us to them as her new family. She told them that we could be their family too, if they wanted. How can we draw down our shutters after that?” says Lee.

“Knowing that we have changed someone’s life for the better makes the long hours, demanding physical work and heartache of watching them rise and fall off the wagon again and again worthwhile, the satisfaction of having our street clients come back to us and say, ‘You don’t have to worry. I am ok now. I have work now, I have a place to live’ is really humbling,” shares Tan.

Pit Stop, adds Lee, has also succeeded in changing perceptions of Malaysians through the many people who have volunteered with the enterprise.

“Here, we give those who may not have had opportunities, another chance. Trying to integrate them into society is a long, slow road but we see more and more of our street clients opening up. There are old uncles and aunties who now come here not just for food but to sit and gossip with friends that they have made here. They come and say hello to some of our regular volunteers. We see a building of trust and the forming of relationships across the table. And that’s good to see.

“We may not be everyone’s cup of tea but we do see more and more people becoming interested in what we do – and that’s a good start,” says Lee.

Not just a soup kitchen , Pit Stop wants to empower their clients to get back on their feet

Indian food memories: Go on an epic culinary journey in this lovely food memoir
Madagascar’s unique biodiversity could take millions of years to restore
How pets motivate children to want to interact with it, promoting development
Showing kindness and empathy for animals
Danish firm designs the SUV of cargo bikes
Coffee Meets Whisky In Perfect Harmony With The Macallan‘s Latest Release
Imaginenation: just drive, don't worry about how to pay that toll
Dear Thelma: My in-laws are intrusive and make decisions for us
London to turn disused rail viaduct into its own High Line
Is space tourism the bane of the environment?