‘I have seen immense growth along the corridors of the SAE,’ says Kamarudin Mohd Shah, Director of Era Global Construction.

In the past when one mentioned Klang or Shah Alam, often the conversation would touch on how far it was from KL city centre and how long it took to travel. Such exchange probably took place in the early millennium when development did not stretch any further than Subang Jaya.

The journey from there to Shah Alam and Klang in the late 1990s was either through the busy Federal Highway or the Shah Alam Expressway (SAE) with sprawling greenery and oil palm estates on both sides.

After 20 years, the SAE (which most motorists refer to as the Kesas Highway) has played a pivotal role in the emergence of new suburban towns like Bukit Jalil, Bandar Kinrara, Bandar Sunway, Putra Heights, Kota Kemuning, Bandar Puteri, Bandar Botanic, Bukit Tinggi and Glenmarie Cove. The SAE, with its easy accessibility to a wide network of Klang Valley highways, has increased the popularity of these towns which boast a population of over 2 million people.

Considered one of the most convenient and fastest travelling modes, the SAE serves as a catalyst to property development in the vicinity. It has attracted many major developers to acquire a land bank along the SAE. IOI Properties Group is among the country’s prominent developers which have two townships located beside the SAE – Bandar Putera and Bandar Puteri in Klang.

“One of the key considerations of a good property is location and accessibility. By having an interchange with an expressway like SAE, such infrastructure has greatly augmented the township masterplan as purchasers will want to stay or invest in a location where there is potential for growth and property appreciation. Residents will be able to enjoy the serenity of a suburban area, whilst having convenient accessibility to the city,” said Teh Chin Guan, COO of IOI Properties Group Bhd.

Such urbanisation has also inspired a more holistic living experience. Many of the developments along the SAE are surrounded by lakes, parks and pristine golf courses such as the 18-hole Kota Permai Golf & Country Club, Bukit Kemuning Golf & Country Resort, Amverton Cove Golf & Island Resort and Kinrara Golf Club. 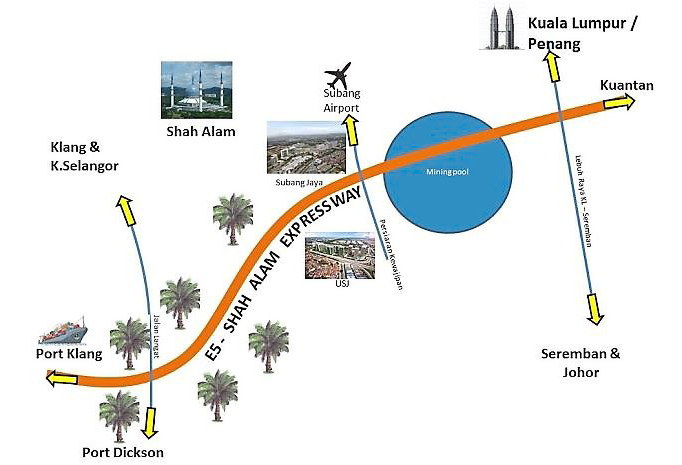 Back in 1996, areas along the East-West of Klang Valley were considered remote with vast stretches of green fields.

For many residents who are staying in one of the townships along the SAE, the daily drive from Shah Alam to KL has always been interesting.

“Over the past 10 years, I have seen immense growth along the corridors of the SAE. Every now and then, I will see a new residential or commercial development on the plains of the once-green fields. A link house used to cost about RM250,000. Now the price has tripled,” shared Kamarudin Mohd Shah, Director of Era Global Construction whose office is in Bandar Botanic.

The increase in population has created a higher demand for new residential and commercial estates. Projects that are being developed such as Bandar Rimbayu, Eco Santuary, Tropicana Aman, Alam Impian, Paradigm OUG and Empire Remix, to name a few, have a Gross Development Value (GDV) of over RM100bil. This in turn has spurred new links connecting the SAE to the Kemuning-Shah Alam Highway (LKSA), West Coast Expressway (WCE) and Kajang Dispersal Link Expressway (SILK).

The suburban centres along the SAE are dotted with popular hangout spots such as eateries and shopping malls.

The SAE is connected to 13 interchanges and has benefited shopping malls such as Aeon Bukit Tinggi (the largest Aeon in South-East Asia and third largest in the world), The Main Place, One City and USJ City Mall. It has also spurred the establishment of many hotels (Empire Hotel Subang Jaya and Sunway Resort Hotel & Spa) and popular tourist attractions such as Sunway Lagoon and Bukit Jalil National Stadium. Whether it is shopping around Subang Jaya or Sunway, the SAE provides easy access to other malls within KL and PJ.

The SAE is not just a means of transportation from one point to another, it is also a fruitful infrastructure investment. When travelling along the SAE during off-peak hours, you may notice the increase in logistic vehicles such as lorries, trucks and cargo trailers.

Seamless connectivity brought about by the construction of the SAE has created conducive conditions for the growth of West Port, South Port and North Port in Port Klang. This allows goods to be transported at a faster, safer and more cost-efficient mode. With the increase in such economic activities, Port Klang has become the second busiest port in Malaysia.

Datuk Michael Tio, CEO and Managing Director of PKT Logistics Group, could not agree more on this. He knew he made the right choice by locating his business close to the SAE.

“As a leading logistics company, it is important to continuously offer our customers increased efficiency and reduced transit time in the operation of logistics solutions. With our office in Shah Alam which is easily accessible via the SAE, this has allowed us to leverage on our extensive supply chain,” he said.

Indeed, the SAE has contributed to nation-building. One cannot help but wonder at the tremendous growth potential of the areas surrounding the SAE.