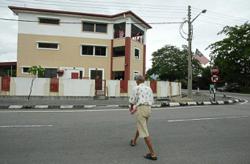 Connery, seen here in a 2013 filepic, reportedly suffered from the effects of dementia in his final years. — AFP

I was very sad to read about the passing of Sean Connery, the actor who first portrayed James Bond on the silver screen. He was my idol when I was growing up. I read that he was diagnosed with dementia. Is that the cause of his death?

Connery was reported to have “slipped away” in his sleep at the age of 90, a few years after he was found to have dementia.

So, yes, it is very possible that dementia and all its complications may have caused his death.

His widow was reported as saying that “dementia took its toll” on the great actor.

I thought that dementia caused memory loss. How can it kill a person?

Dementia is now the leading cause of death in England and Wales, even overtaking heart disease.

In the United States, dementia deaths have doubled as well.

This is as so many people are living to old age, and there are plenty of medications to help people cope with heart disease – the number one killer globally for many years – better than there were a decade ago.

Dementia is a progressive disease that has many causes. Its symptoms worsen gradually over time.

People who have late stage dementia cannot converse any more with their carers.

So they are unable to easily inform them about what is going wrong with them like people without dementia can.

They cannot respond to their environment, or even what their own bodies are telling them if they get a disease or illness.

They cannot walk around or sit down without someone’s help.

They can’t even tell you if they have an infection.

If the carer can readily spot all the signs of an infection in the person with dementia on their own, then the patient is in good stead under their care.

But most carers are unable to easily catch such signs.

I am a carer of someone who has dementia. Do you mean that her life and death may depend on my ability as a carer to spot signs of an infection?

It may. It is just like having a newborn baby. The baby cannot tell you when he is ill.

He can only cry or refuse to feed, or he may have a fever.

You have to look out for the same kind of signs in a loved one with dementia.

They may be moody, tell you the same things over and over again, lose their appetite, or have different bowel and urination patterns.

You can also feel their forehead or neck to discern if they have a fever.

That is why it is always good to have items like a thermometer, blood pressure monitor or glucose test kit at home when you live with a dementia patient.

This is so that you can do a preliminary check on the relevant readings before you take the patient to the clinic or hospital.

Why would someone with dementia die if I fail to spot such signs as a carer?

A common example is when a person with dementia catches an infection.

Because she is unable to tell you that she is feeling feverish or unwell, the infection can rage on unchecked.

People who have dementia are at higher risk of catching infections than you or I, as they spend most of their time just sitting or lying down.

They also have difficulty with bladder and bowel functions.

As a result, they can get bed sores, pneumonia, urinary tract infections and gut infections much easier than we can.

And they are unable to easily inform you about it.

Unattended or if caught and diagnosed too late, the person with dementia simply just dies of the raging infection.

Even the common flu can be very deadly to the dementia patient as it can spread throughout her lungs.

And you can imagine what catching the SARS-CoV-2 virus that causes Covid-19 can do to a dementia patient.

Additionally, a person with dementia will eventually be unable to swallow properly.

Food and water end up getting into her lungs, causing aspiration pneumonia.

Couple this with the fact that her immune system is already weak, and therefore cannot fight off infections as easily as you and I can.

People with dementia can also suffer from heart attacks easily because of their unfortunately sedentary lifestyle.

Once again, they may not be able to tell you about the pain they are experiencing during a heart attack.

Other less common causes of death in dementia are dehydration or malnutrition.

Dehydration and malnutrition? Who would let their loved one starve?

Sometimes, dementia patients are put in care homes where the carers might have too many patients in their charge to pay sufficient attention to each patient, are not trained well or simply don’t care enough about their responsibilities.

Even when the patient is living at home, there may be carers who don’t care enough about their responsibilities and/or the patient, or who don’t know what needs to done for the patient.

Some patients might just refuse to drink or eat properly.

And a carer who does not have enough time or does not care enough about the patient might not bother to ensure that they do drink or eat sufficiently.

So dehydration and malnutrition can occur.

In addition, people with dementia can also die from a fall.

They tend to fall more easily than other people as they need someone to assist them all the time in getting in and out of their chair or wheelchair.

Sean Connery's widow reveals he had dementia, which 'took its toll on him'

Helping children deal with a grandparent who has dementia

Unmasking Beauty Through Nutrition
University students are more sedentary and eating less healthily since the pandemic began
Here's how to handle your needle phobia
Four nutrition tips for 2021
16 tips to ensure you get a good night's rest
Psoriasis Is More Than Skin Deep
Covid-19 vaccines found to be effective against superspreading coronavirus
Forget about diets, just eat intuitively
When young children tell tall tales
Helping your kid deal with exam stress