The more road intersections a person with dementia has to navigate, the higher the chances of them getting lost. — Filepic

People with dementia are more likely to go missing in areas where road networks are dense, complicated and disordered, finds new research from the University of East Anglia (UEA) in the United Kingdom.

Researchers studied hundreds of “missing person” police reports for people with dementia and compared each case to the surrounding road network.

They hope their findings can help inform future safeguarding guidelines.

“Around 70% of people with dementia may go missing at least once, with some at risk of going missing multiple times.

“Around 40,000 people with dementia go missing for the first time every year in the UK, and this figure is likely to grow with the projected increase in the dementia population.

“Unfortunately, the first event when people with dementia go missing comes completely out of the blue, when doing such routine activities as going for a walk with the dog or getting the newspaper from the local shop.

“When a person with dementia goes missing, it can have life-threatening consequences.

“But very little is known about what actually causes people with dementia to go missing.”

The research team set out to find whether the design of road networks could be linked to these people going missing.

They looked at 210 police records of people with dementia going missing in Norfolk over three years and compared each case to the nearby road network.

Team member and PhD student Vaisakh Puthusseryppady said: “We know that people with dementia have difficulty navigating, so we wanted to see whether there was a relationship between people going missing and the outdoor environment they went missing from.

“We found that the higher the density of road intersections, the more complicated the road intersections are and the less ordered or less grid-like the overall road network layout, the greater the risk for people with dementia to get lost.

“We think this is because each road intersection represents a point at which a person needs to make a critical navigation decision.

“The more intersections there are, the more complex these intersections are and the more disorganised the overall road network is, the bigger the problem for people with dementia.

“This is because these factors can make it more likely for people with dementia to make an error and make a wrong turn, causing them to get lost and go missing.”

He added: “We hope that by identifying these environmental risk factors, our findings can potentially help identify or predict areas where people with dementia may be at higher risk of going missing from and contribute to the development of safeguarding guidelines to prevent them from going missing in future.

“It will also inform future recommendations for dementia-friendly urban design.”

The study was led by UEA in collaboration with University College London, the University of Leeds, the Norfolk and Norwich University Hospital, and Norfolk Constabulary.

The study was published in the journal Scientific Reports on Oct 29 (2020).

Helping children deal with a grandparent who has dementia 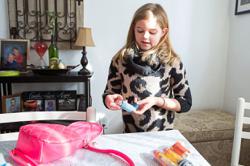