The plank, which builds the core muscles, is one of Nisha’s favourite exercises. She even won a planking challenge over younger contestants! — Photos: RAJA FAISAL HISHAN/The Star

It pays to stay physically fit, and it is never too late to start – just ask Nisha Mohd Ibrahim.

She was 66 when she first joined a gym, and it happened by chance.

Prior to the movement control order (MCO), she would make a trip from Penang where she lives, to Kuala Lumpur, once every one to two months, as all her children – three daughters and a granddaughter – live here.

“I was walking down the LRT station in Petaling Jaya (Selangor) and a group of people were giving out flyers for a one-week free trial at a gym.

“Since I had a week left in KL, I thought I’d give it a try. Prior to that, I had never entered a gym before!

“I tried a couple of classes such as Pilates, yoga, RPM (an indoor cycling workout) and liked it, so I signed up at the branch in Penang.

Older people at fitness centres are not exactly a dime a dozen, so the septuagenarian – also being a woman – naturally draws plenty of attention when she is working out.

“At the gym, nobody my age attends Body Pump (a resistance workout using a barbell and light weights) classes.

“I’m always standing in front of the instructor, while the rest of the members will stand behind.

“I’m not worried about what other people are saying because I’m in class to exercise, ” she shares.

Slowly, she learnt how to use gym equipment and do body weight exercises such as planks, push-ups and squats, among others.

Last year, she even emerged as the planking champion in a mini challenge organised by the gym – she managed to hold the position for an impressive five minutes!

The person who came in second was 30 years younger and called it quits a few seconds before Nisha.

“It was all in the name of fun! Who would’ve imagined I’d be taking part in challenges at this age?” she says, smiling.

Also read: Work out your frustrations with StarFit

Since her schooldays, Nisha has been active in sports and represented her school in the 4x100m sprint relay.

At the age of 23, she got married and was introduced to hiking by her late husband.

“That started my love affair with the forest trails, ” she recalls.

“We’d hike a few times a week after work, but once my three daughters came along, I didn’t have much time for anything else.”

Also read: Jog on the spot for a simple home workout 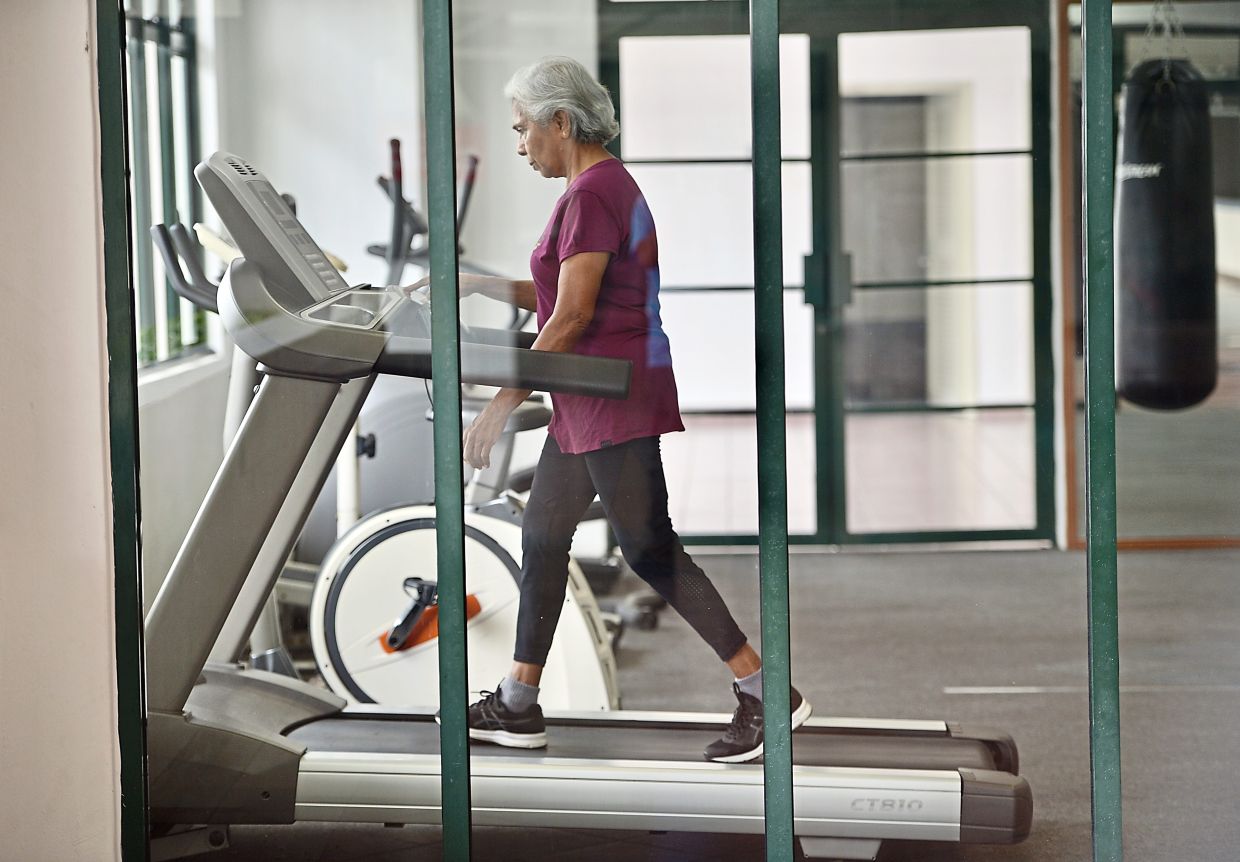 Not even a visit to her daughters in Kuala Lumpur will keep Nisha from the gym.

It was in the 1970s that her husband joined one of the Penang chapters of the Hash House Harriers (HHH), an international group of non-competitive running social clubs.

“My husband would come home excitedly and try to persuade me to join, but I kept saying no because the children were still small and I had to take care of them.

“Also, seeing how muddy and filthy he’d be after a hash run, l wasn’t the least bit interested – and I had to wash his clothes!

“The thought of getting dirty put me off.”

After months of convincing by her husband though, Nisha relented and agreed to follow him on a trail. She told herself she’d try it once.

The location, Bukit Hijau (hashers called it Tembaga waterfalls then), was just 10 minutes away from her house.

That first try hooked her completely – she loved the scenic trails, the fresh air, the singing insects, the clear streams and the myriad of animals in the forest.

The camaraderie among like-minded people with all types of personalities was also a lure.

To her pleasure, the trail was dry, so she returned home clean.

Soon, she became a regular face among the HHH.

Unless she’s out of town, Nisha, who currently belongs to the Rainforest HHH, never misses a hash run, which are organised once or twice a week.

Even after her husband’s demise, she continued to run as hashing helped her cope with the grief of losing him.

She is highly respected in the hashing community, especially in terms of her age and seniority.

To date, Nisha has covered almost every trail in Penang and has participated in over 2,000 hash runs.

“Of course, I’m careful, although I’ve fallen, twisted my ankle, and hurt myself here and there!” she admits, laughing.

“But I just rest for a few days, then pick myself up and continue. I consider these slight hiccups.

“My children are always telling me to be careful, because sometimes, I head out to the trails alone, but there are always other hikers there. Anyway, I enjoy my own company.”

Going into the jungle

One time, while running a trail in Cameron Highlands, Pahang, Nisha was in the middle of the pack, with no one in sight either in front or behind her.

Suddenly, an Orang Asli armed with a blowpipe jumped from a tree and stood in front of her.

The natural surroundings of the jungle was what hooked Nisha onto hashing. — NISHA MOHD IBRAHIMPetrified that he was going to hurt her, Nisha stopped in her tracks, not knowing what to do or who to call for help. There were no mobile phones then.

“I gave him my sweetest smile and he let me pass. I ran so fast and never looked back!” she recollects, still shuddering at the incident.

That did not stop her from exploring other trails alone however.

She says, “I feel at peace inside the jungle. There’s a different dimension, something I cannot put into words.

“There are many people who fear going into the jungle, but it’s actually good to overcome your fear.

“In the beginning, I was also a little apprehensive, but now, I no longer fear anything.”

Her best achievement was completing a 32km hash challenge in Kuala Lumpur a few years back. She was the only woman in a team of four.

“It took me eight hours to finish the challenge, but I’m proud to say I’ve a certificate to show for my achievement, ” says Nisha, who keeps her collection of medals and certificates stashed in a few showcase cabinets.

Unfortunately, none of her kids share her hashing passion, although her youngest daughter joined a hash run Nisha organised last year (2019) – and struggled to keep up!

The petite lady has no formula to keeping trim and healthy.

Citing Indian food as her favourite, she eats whatever she wants (mostly homecooked meals), but controls her portions.

“I do everything in moderation, ” she says.

Like most active people, the MCO has taken a toll on the senior citizen.

Before the MCO, her fitness regime consisted of hiking, hashing and strength training at the gym three or four times a week.

Her routine has since changed due to the current restrictions.

“At the beginning, I was feeling terribly sad because everything was locked down – I couldn’t go to the gym or into the forest.

“I would only go to the market or supermarket once a fortnight, and at other times, I kept myself occupied with housework and gardening, ” she says. 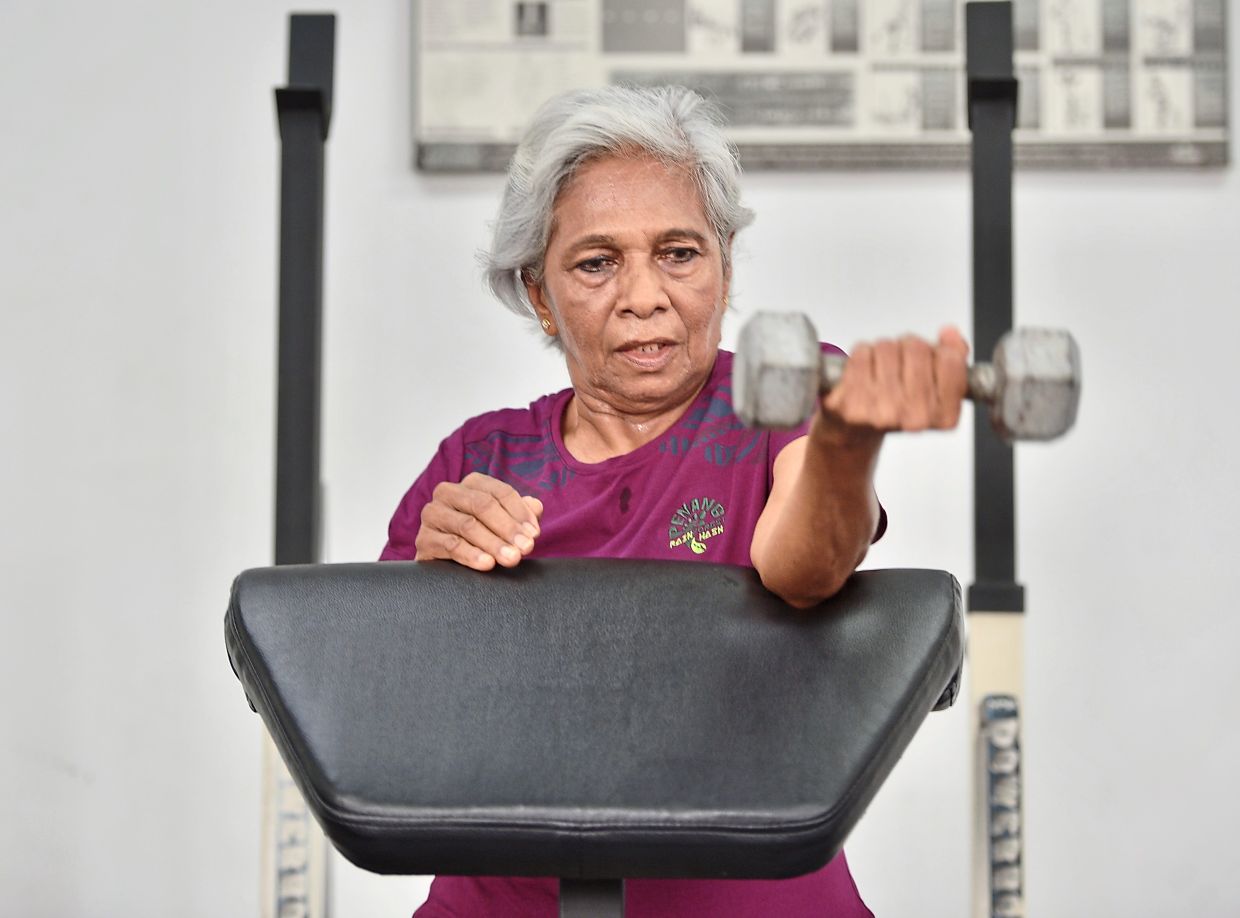 Strength training is a regular part of Nisha’s workout routine. Here she is doing some bicep curls.

Now that a few outdoor activities are allowed under the conditional MCO, a relieved Nisha goes walking around her neighbourhood.

While fasting during Ramadan, Nisha cut out all strenuous exercises.

She says, “It really depends on my mood. I try to do a bit of strength training when I feel like it, and I follow a yoga session on TV every morning.

“Certain yoga poses are difficult for me to accomplish, so I do what I can.”

Come 5.30pm, she puts on her shoes and heads out the door, walking for an hour or more, and covering a distance of 3km to 6km daily.

“The forest parks are still closed, so I resorted to walking in the small lanes near my house, but more people started following suit, so now, I go where there are less crowds.”

Also read: Here are some tips for working out at home

This Hari Raya Aidilfitri will be different for Nisha as she will be celebrating alone – none of her children are able to come home to their island state.

One daughter attempted to get a police permit to visit her mother, but was denied, even after appealing twice.

“For the past few years, I have been going up to Kuala Lumpur to celebrate with my girls, but this year, they are taking precautions and not returning home.

“I can’t visit them either, so we keep in touch via phone and video calls.

“I don’t even have new clothes as I asked the tailor (in Relau) to sew a new baju kurung before the MCO, but the distance is too far (over 30 minutes’ drive) for me to go and collect it now.

“Oh well, it will be just another day for me then. There is always next year, ” she sighs resignedly.

Being self-sufficient, Nisha has no intentions of moving to Kuala Lumpur to be with her daughters.

She says, “I feel more secure in my home. I do my own things and don’t disturb anyone.

“The wet market is 2km away, so I can take a walk to buy my groceries and go home.

“I believe in enjoying every moment of life.”

Editor’s note: Photos were taken before the MCO.

Jog on the spot for a simple home workout

Stressed from the MCO? Scream it all out

Scientists aim to double cancer survival within a decade
No place for racism in healthcare (or anywhere)
The second top killer in the world is bacteria
Loading up on nutrients to help fight disease and maintain health
Which dangerous virus or bacteria will strike next?
Detecting lung cancer early, even without symptoms
Checking if that tomato paste can still be eaten
Nordic walking is good exercise even if you have joint or bone issues
Online marketing pushes unhealthy feeding of children
When puberty strikes too early