Parents should set an example for their children by dividing the household chores equally among themselves, as well as assigning both sons and daughters all types of housework without discrimination. — PP

In fact, the fifth Sustainable Development Goal outlined by the United Nations is: “To achieve gender equality and empower all women and girls”.

A key strategy to tackle these social issues is to teach children about gender equality and respect.

Gender equality can be defined as the enjoyment of equal rights, resources, opportunities and protection by both genders in all facets of life.

When girls and boys are equally educated, empowered, healthy and free from discrimination and violence, they will be able to reach their full potential.

This in turn, leads to communities becoming more prosperous, stable and sustainable.

While there has been some progress in recent years, there is still much that needs to be improved on when it comes to gender equality.

Gender inequality – or the unequal distribution of power, resources and opportunity between men and women – is reinforced through both informal and formal mechanisms.

There are many norms, practices and structures that encourage men and women to adopt distinct gender identities and roles in society, and perpetuate dated stereotypes that position masculine roles as superior to feminine ones.

On the global stage, child marriage (which affects girls disproportionately) remains a pressing problem with one in five girls becoming a mother before the age of 18.

One of the leading causes of death for girls aged 15 to 19 is complications during pregnancy and childbirth.

The situation in Malaysia is comparatively better in terms of gender parity in education and health.

However, stereotyped gender roles, especially with regards to career and marriage, are still present.

According to a report by the Statistics Department, the rate of female labour force participation is 56%, compared to 80.9% for male.

Furthermore, only 20% of senior roles are held by women.

Some basics about respect

Respect is about treating ourselves and others with dignity and consideration.

We all aspire to achieve a future where all people are treated equally and with dignity, and live in a safe society.

The best way to teach your kids about respectful relationships is to practise respecting others yourself.

Let them know that people have diverse views, beliefs, values and religions, but it is important to show respect, even when you do not agree with someone’s views.

At the same time, communicate openly and sort out conflicts fairly, e.g. do not yell or be aggressive.

Here are some things that you can do as a parent:

Stress on the importance of treating others equally and fairly.

Make sure your kids see you behaving this way, and talk to them about it.

For example, explain why you are sharing chores with your spouse or why your son should receive the same amount of chores as his sister.

Divide housework and childcare equally with your spouse – this sets an example for the children.

When assigning chores, involve both boys and girls in all types of housework, e.g. let your son wash dishes and your daughter throw out the rubbish alternately.

Let your son play with a cooking set or your daughter play with toy trucks if that is what they want.

Girls are often imposed with unrealistic beauty standards set by the media and society.

Teach your kids that we are defined by how we act, not by how we look.

Do not allow gender to be used as an excuse

Do not condone negative behaviour because of a child’s gender. This will associate gender with a negative act.

Saying “Boys will be boys” as an excuse when a boy acts aggressively can normalise violent behaviour as he grows up.

These statements reinforce unhelpful messages about how boys and girls should feel and behave.

Role models can come in all appearances and from various backgrounds.

Introduce a female scientist or a male cook to your children and explain how these role models contribute to society.

This will teach them that they can be and achieve anything.

Gender equality does not mean there are no differences between genders; it simply means that everyone should be given the same opportunities and treatment.

Teaching kids about gender equality and respect is one way to open up more opportunities for them and unleash their full potential.

Dr Yang Wai Wai is a clinical psychologist. This article is courtesy of the Malaysian Paediatric Association’s Positive Parenting programme in collaboration with expert partners. For further information, please email starhealth@thestar.com.my. The information provided is for educational and communication purposes only and it should not be construed as personal medical advice. Information published in this article is not intended to replace, supplant or augment a consultation with a health professional regarding the reader’s own medical care. The Star does not give any warranty on accuracy, completeness, functionality, usefulness or other assurances as to the content appearing in this column. The Star disclaims all responsibility for any losses, damage to property or personal injury suffered directly or indirectly from reliance on such information. 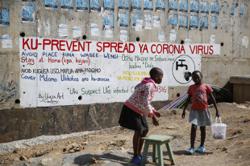