The truth about caffeine and pregnancy

Should a baby bump stand in your way of enjoying a daily cup of coffee?

Pregnancy is a mixture of joy, anticipation, and a long list of do’s and don’ts for many women. This list often involves food, beverages and medications that are deemed harmful to the unborn child – some proven, others not. While many doctors would advise pregnant women to avoid alcohol due to evidence that heavy drinking can cause birth defects, their views on other drinks such as coffee are less consistent.

It was once thought that pregnant women should avoid drinks with high caffeine content such as coffee, soda and energy drinks because it was shown in some studies that this may increase the risk of miscarriage. However, this changed in 2010 when the American College of Obstetricians and Gynecologists (ACOG) issued a position statement that says moderate caffeine consumption (less than 200mg a day) does not appear to be a major contributing factor in miscarriage or preterm birth.

“The relationship of caffeine and growth restriction remains undetermined,” says the ACOG, who reaffirmed their statement last year.

One of the reasons why caffeine raises concerns is its ability to cross the placenta and reach the baby. “Although you may be able to handle the amounts of caffeine you feed your body, your baby cannot,” says the American Pregnancy Association in their web page on caffeine intake during pregnancy. “Your baby’s metabolism is still maturing and cannot fully metabolise the caffeine,” the association says.

Although caffeine is most commonly associated with coffee, there are other drinks and foods that contain caffeine, including sodas, energy drinks, tea, chocolate, and other foods that contain these ingredients. The caffeine content may differ – an 8-ounce (237ml) cup of instant coffee contains up to 100mg of caffeine, while the same amount of brewed or filtered coffee can contain up to 140mg and 200mg of caffeine (see table).

Teas and sodas generally have less caffeine content, but these can add up. Some of these beverages also have decaffeinated options, but many of these options contain at least 1% to 2% of their original caffeine content.

Besides its enticing aroma and taste, the benefits to drinking coffee range from the boost of energy it gives to the various nutrients it contains. When taken in moderation, caffeine can improve performance in tasks that involve working memory and reaction time. It could also facilitate learning in classes, where information is presented in a passive manner.

However, high caffeine intake can cause tremors, sleeping problems and palpitations, especially in individuals who are not used to taking such high amounts.

Pregnant women who consume high levels of caffeine during pregnancy may risk having babies with low birth weight, which can increase the risk of health problems later in life, says the UK National Health Service (NHS). There could also be a slight increase in calcium loss for women who do not take sufficient calcium, says Washington State University in Spokane Linda K. Massey in a WebMD article on osteoporosis.

As pregnant women require more calcium in their diet for their baby to develop well, they may need to cut down on their normal coffee and caffeine intake or increase their calcium intake if they continue to consume caffeine. “What pregnant women can do is to put more milk in their coffee,” says dietitian Prof Winnie Chee.

So how much coffee a day is safe for pregnant women and their babies? The UK National Health Service recommends an upper limit of 200mg of caffeine a day, which roughly translates to two regular (8-ounce or 237ml) mugs of instant coffee without the addition of other foods and drinks with caffeine.

“Try decaffeinated tea and coffee, fruit juice or water, and limit the amount of energy drinks as they can be high in caffeine,” the NHS advises. If you also consume soda, tea and chocolate besides coffee, you may have to reduce your coffee intake in order to keep within the 200mg limit.

If a day’s craving calls for another bar of chocolate, fret not. It is okay if you do not do it often. “Don’t worry if you occasionally exceed the recommended limit, because the risks are quite small,” says the NHS.

That said, it’s best to play it safe when it comes to your baby’s health. 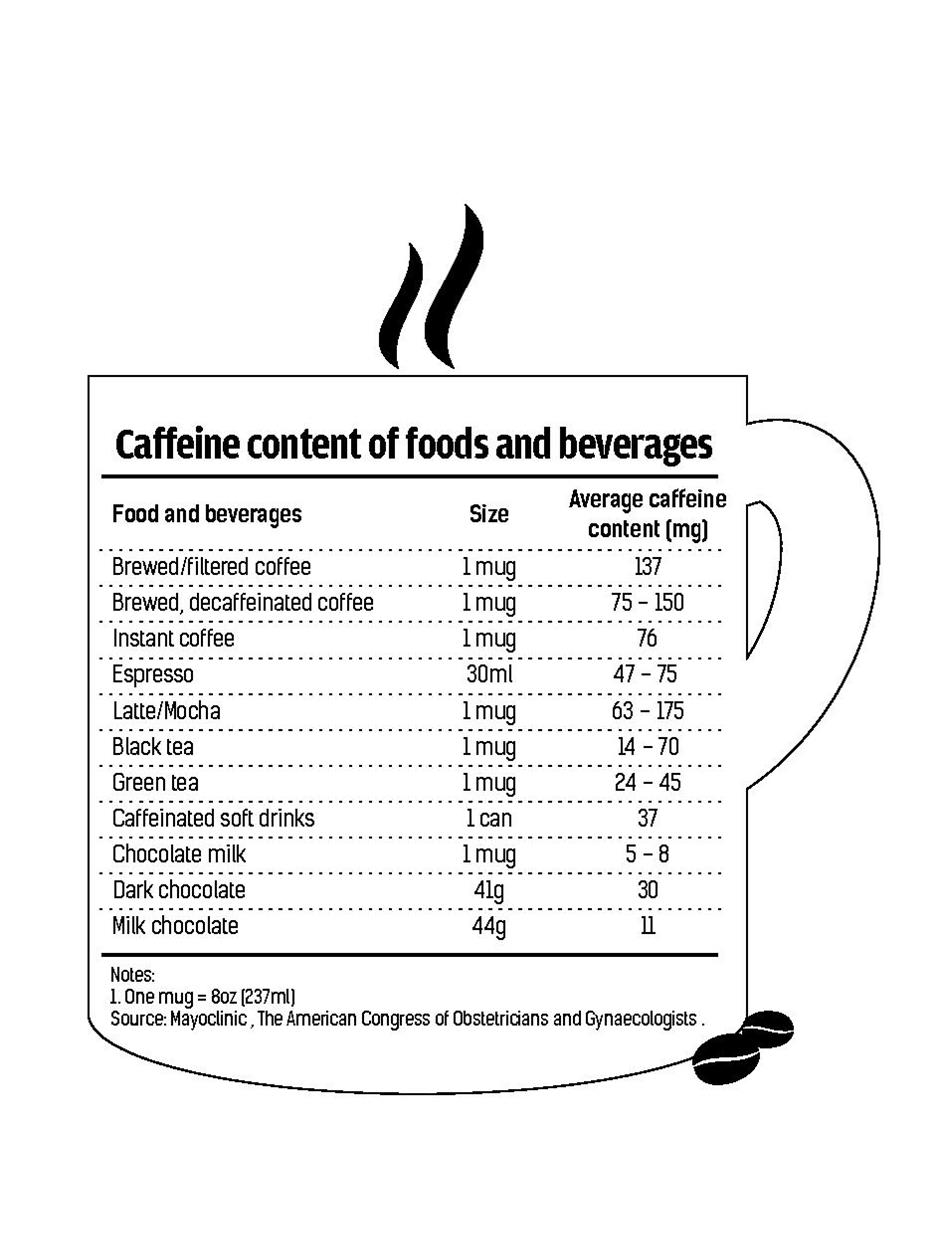 >> This article is courtesy of Nestlé.