Two US agencies have updated their advisory on eating seafood for children and women.

Eating seafood is generally considered good for you, but the catch is, some kinds of fish tend to be contaminated with high levels of brain-damaging mercury.

Meanwhile, many of the most popular seafood choices for Americans provide relatively low amounts of the fatty acids that stimulate brain development and help prevent heart disease.

In the latest attempt to strike a balance between the health benefits and risks, the Obama administration on Tuesday encouraged pregnant women, women of childbearing age and breast-feeding mothers to eat at least eight (227g) – but no more than 12 (340g) – ounces of low-mercury fish a week, an amount equivalent to two or three servings.

The US Food and Drug Administration (FDA) and US Environmental Protection Agency (EPA), which have squabbled for years about how to advise Americans about mercury in seafood, said following their guidance would increase the chances that women and young children obtain beneficial nutrients while avoiding a toxic metal.

Examples of low-mercury species include salmon, shrimp, pollock, tilapia, catfish and cod, according to an updated consumer advisory proposed by the two agencies.

“It’s become clearer and clearer that there are significant benefits (from eating seafood) in terms of health and development for the fetus and young children,” Stephen Ostroff, the FDA’s acting chief scientist, said during a conference call with reporters.

“There are so many women that are missing out on the benefits.”

Young children should eat smaller portions of fish based on their age, ranging from three to eight ounces (85-227g) a week, according to the updated advisory.

Which fish to eat?

But critics said the government again failed to give Americans enough advice to make smart choices when shopping at the grocery store or fish market.

Similar to a 2004 government advisory, the FDA/EPA proposal urges pregnant women and young children to avoid four species that are often contaminated with high levels of mercury: shark, swordfish, king mackerel and tilefish from the Gulf of Mexico.

Still, despite more than a decade of complaints from scientists and health advocates, the FDA/EPA advisory fails to caution consumers about other commonly sold fish that can contain more mercury than albacore tuna, including bigeye tuna served at sushi restaurants, grouper, orange roughy, Chilean sea bass and marlin.

The advisory also fails to reflect the government’s own testing of canned light tuna, a product recommended by the FDA and EPA as a low-mercury option.

A 2005 Chicago Tribune investigation found that cans of light tuna can contain high levels of the toxic metal, a finding later confirmed by the FDA.

And though the government agencies stressed that seafood offers important health benefits, the advisory doesn’t emphasize which fish provide the biggest boost.

A chart on the FDA website shows that salmon is the only popular type of seafood that is both low in mercury and high in beneficial fatty acids.

“You really need this kind of information prominently displayed at the seafood counter,” said Sarah Klein, a senior attorney at the Center for Science in the Public Interest, a group that has sued the FDA seeking warning labels at grocery stores.

“As it stands now, the government is forcing pregnant women to conduct their own research projects to figure out which fish are safest for them to eat.”

All types of fish contain some mercury. Because the metal accumulates as it moves up the food chain, levels tend to be higher in large and long-lived predators such as swordfish.

The Tribune’s investigation found that supermarkets routinely offer fish that is highly contaminated with the toxic metal, in part because the federal government does not inspect seafood for mercury before it is sold.

Studies have shown that exposure to mercury in the womb, mostly from fish eaten by women, can irreversibly damage the brain before a child is born, causing subtle delays in walking and talking, as well as decreased attention span and memory.

Some research suggests that mercury can also increase the risk of heart disease in adults.

There are signs that warnings about mercury from paediatricians, health groups and the government are having a positive effect.

In November, the EPA reported that mercury levels in the blood of American women dropped 34% between 1999 and 2010, even as the amount of fish consumed remained stable.

Officials at the FDA and EPA have been debating a new seafood advisory for years.

During the waning days of US President George W. Bush’s administration, the FDA pushed to scrap the government’s mercury warning, drawing a rebuke from EPA scientists who called the move “scientifically flawed and inadequate”.

Questions about tuna, one of the nation’s most popular seafood choices, have prompted particularly rancorous debates, according to transcripts of government advisory committee hearings.

The chances that any type of canned tuna will contain high levels of mercury are so great that Consumers Union, the nonprofit publisher of Consumer Reports magazine, urges pregnant women never to eat it.

Elizabeth Southerland, director of science and technology in the EPA’s Office of Water, said the agencies will solicit public comments and could update the consumer advisory to include other species of fish.

But Ostroff defended the decision to promote canned light tuna as a low-mercury option.

“If there is variety in the diet,” he said, “then concerns about the occasional can that may have a higher than indicated level of mercury should be negligible.”

The industry frequently cites an FDA analysis that found one in five pregnant women eat little or no fish.

“This news begins to mobilize pregnant women to add more fish to their diets,” Jennifer McGuire, a National Fisheries Institute dietitian, said in a statement.

“It is an important starting point.”

Based on government data, some of the best seafood choices are salmon, sardines, farmed trout, anchovies, shad, herring and mussels.

“They put a lot of faith in people eating a varied diet,” Sonya Lunder, a senior analyst at the nonprofit Environmental Working Group, said of government officials.

“But what they really should be doing is showing people that there are clear winners when it comes to seafood.” – Chicago Tribune/MCT Information Services 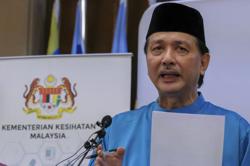 Children of frontliners are not being discriminated, says Health DG